The themes that YouCode founder K Suriya Prabha teaches in one workshop include coding robots, becoming a robot and experiencing AI.

A 31-year-old woman is leading a quiet revolution in Tamil Nadu and taking NITI Ayog's #AIforAll initiative to the ground roots.

Artificial Intelligence is being seen today as the way to the future and a tool that is set to disrupt our current system of learning and working.

In August 2017, the tech-savvy Narendra Modi-led government set up an 18-member AI task force to look into the sector and figure out how AI could be eased into the existing patterns of employment and usage in India rather than disrupt the system by taking away jobs.

NITI Ayog, the central government's think tank as well as PM Modi have taken up the issue of AI. Now, the Central Board of Secondary Education is mulling the introduction of AI as an elective subject for students in classes 8, 9 and 10.

But while these initiatives are expected to bring 'inclusive growth' as spelled out in NITI Ayog's 2018 national strategy for AI, many fear that the benefits may remain concentrated in cities and metros. What about villages?

Enter K Suriya Prabha, a former copywriter from Theni, Tamil Nadu, who has come up with an innovative solution to take such a complicated, technical subject to villages in India in order to bridge the gap between urban and rural learning.

Breaking down the complex

Prabha founded a startup called YouCode Intelligence Solutions in 2017 with the aim of imparting technical knowledge to students in government schools in villages of Tamil Nadu.

"I was inspired by NITI Ayog's ideas on the expansion of AI. But then they were only talking about a demographic that had access to resources," Prabha told News18. "But what about those kids in villages that have no resources? They have never even seen what a robot could look like," she added. According to Prabha, there was a huge talent pool in rural India, waiting to be tapped. "Not only CBSE the whole country's education system should have to look into AI curriculum," The entrepreneur said, adding that India was facing a bleak future in the age of AI if it fails to do so.

YouCode has come up with innovative ways to teach AI to school children of classes 6 to 8. They have created some Unique Interactive Demonstration using Google and Amazon AI kits to make the tough subject approachable to young children.

The themes that Prabha teaches in one workshop include coding robots, becoming a robot and experiencing AI.

"We teach coding to kids in a fun and interactive way using smart Robots like Mekamon, Cozmo, LittleBits, Sphero, Nitendo Labo Kit, etc. We also use programs like the Block program to really break the process of coding down," Prabha said.

Prabha and her team conduct workshops in villages. So far, they have conducted 5 successful workshops. Each of them had a participation of 300-400 children. So far, YouCode has covered villages in the Ramanad, Madurai, Virudhunagar and Ramanathapuram districts of Tamil Nadu and conducted workshops with over 3,000 children. Ramanad, among them, is one of the poorest districts in the state.

The young entrepreneur and mother of two, who takes her inspiration from Dr Fei Fei Li, co-founder of AI4All and co-Director of the Stanford human Centered AI (HAI) Institute, said that this was also a way for her to bring more women in tech and engineering sectors, which remain largely male-dominated.

"This is an avenue that remains unexplored by women due to male dominance in tech schools and engineering colleges. If there are more women in the field like Dr Fei Fei, more of us can think of pursuing these unconventional careers," Prabha said. 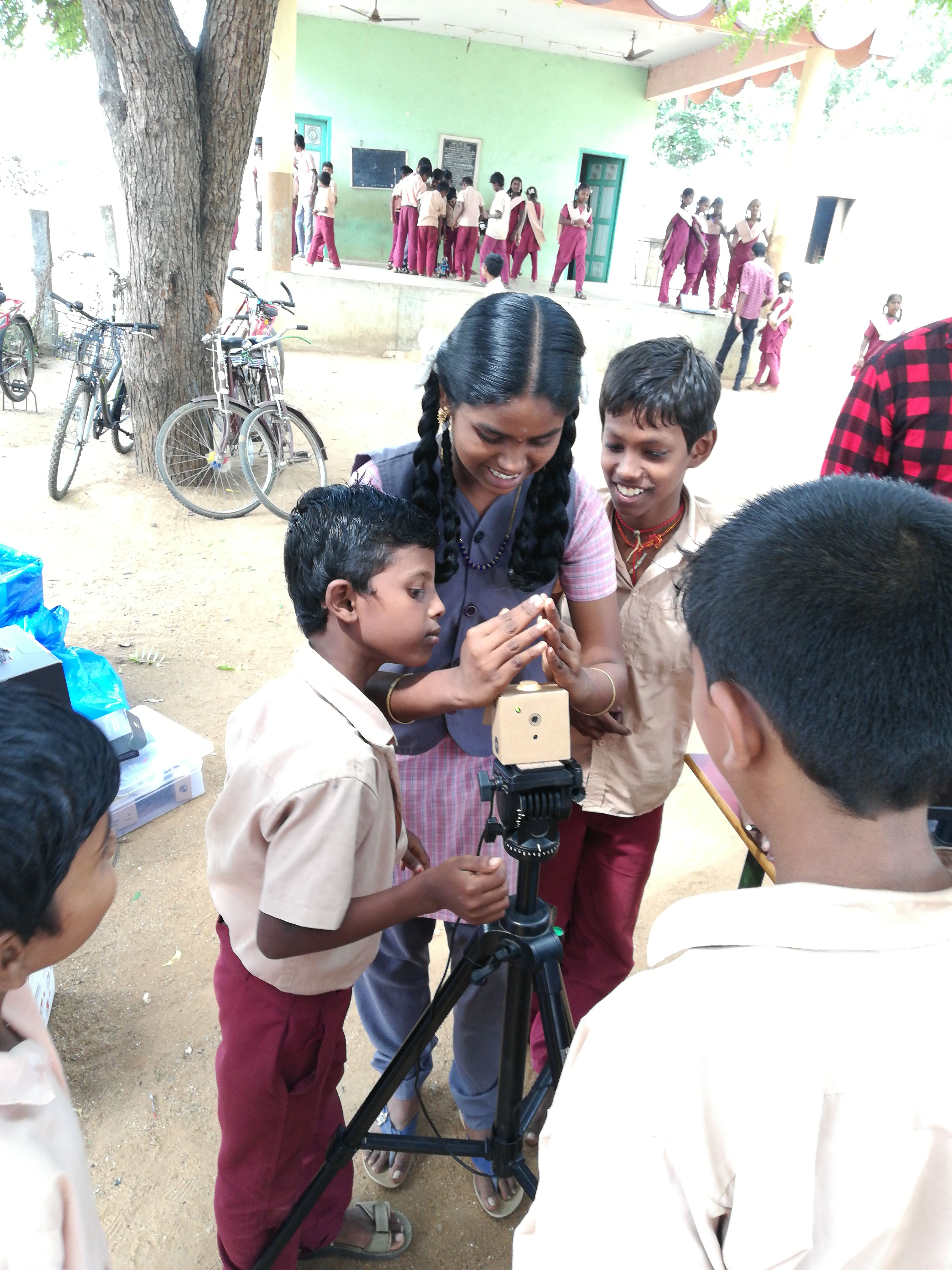 Girl students curiously looking at a Joy Detector (Google AI Kit) during one of the workshops. (credit: Special Arrangement)

She added that her organisation ensured equal participation of girls in the workshops so that they do not miss out.

Can villages cope up? A look at some numbers

In the last fifty years, rural India has progressed in terms of education and literacy. According to ASER Centre's 'Twelfth Annual Status of Education Report (ASER 2017: Beyond Basics), 70 per cent of rural youth in the age group of 18 years were enrolled in schools and college, a significant increase from the previous decade.

However, of the 30,000 youth surveyed, 57 per cent in the 14-18-year-old category could not do simple division problems in mathematics. 25 per cent were unable to read or write fluently in their own language.

Fresh data from ASER's 2018 report found that only 50.3% students studying in government schools in India can read a Class 2 level textbook. Only 27.8% of all the students that were surveyed were able to perform simple division and asthmatics.

If the present system of schools is unable to provide adequate learning to students, would a subject like Artificial Intelligence not cause further confusion and stress?

According to the 2018 ASER report, foundational learning was one of the most important parts of education as skills learnt early on can go a long way in a child's future understanding of educational concepts and skills. Prabha conducting an AI class among girl students in Ramanad.

Rural Development Ministry's figures under Mission Antyodaya, quoted by The Print in December last year, state that 14 per cent of villages in India do not have any schools at all. Of the 5,27,507 villages whose data has been made available, 47 per cent only had up till primary schools. Only 11 per cent had high schools for classes 9 -10 while just above 6 per cent villages had senior secondary schools.

The report clarified that the data was only limited to villages and did not include gram panchayats.

An increase in cell-phone proliferation in India in the last decade has brought many in rural India face to face with modern technology. Smartphones, though still a luxury, are not unheard of in villages and according to Prabha, there is a genuine curiosity among children to know more about artificial intelligence and the technology behind cell phones and televisions. 14 to 18-year-olds alone constitute 165 million people, 85 million of whom live in rural India. Prabha, the founder of YouCode, feels that India needs to emulate China and United States in this regard to be able to properly train this demographic.

"High School students in the US as well as those specifically in Silicon Valley study AI. China has started teaching AI in about 40 schools in big cities and towns. It is the skill of the future," Prbha said, adding that if Indians did not invest in it now, it might be yet another industrial (this time digital) revolution that we will miss by inches.