Threatened and Forced to Change Name, Beef Festival Organisers in Kolkata are Sticking to The Menu

"I never knew beef was this big a deal, in Kolkata at least," the organiser said.

Threats and abuses from political parties and Hindutva pages have forced organisers of Kolkata Beef Festival to change their name to Kolkata Beep Festival. Quite a fun pun on the word. But the organisers have been stubborn in their agenda and refused to alter the menu.

"Roasted beef chilli, black beef ribs, beef pikada, beef momo, beef burger, beef pizza are some of the things on our menu. We also have some pork items," said Arjun Kar, one of the organisers.

The name of the festival was changed so as to avoid further trouble and curb the threats.

Kolkata, since time immemorial, has had a rich heritage of food. And beef forms an integral part of the heterogeneous cuisine that Calcuttans boast of. In fact, the city has a number of restaurants which has been serving beef for decades now.

This was probably the idea that Arjun Kar, who is a part of a music band called 'The Accidental Note', had in mind when he came up with the idea for a beef festival in the city. He chose to name it Kolkata Beef Festival, much to the annoyance of many.

"I was going through some amazing food options available and I felt bad that they are usually not available to us. I thought we should have an event which allows the people of Kolkata who love beef anyway to try out a whole menu of options they probably haven't yet," he told News18.

Kar said that he's received mix responses ever since he announced the festival and created an event on Facebook. While some seemed extremely eager for the event which is slated to take place on June 23, some hurled abuses at him and his group as well.

"Simultaneously we started getting abuses and threats, but mostly not from Kolkata, but people in UP, Jharkhand et cetera," he said. Kar took it in jest till things turned ugly. For Kar, it was 'kind of funny' until Hindutva right-wing pages started criticizing them for organising the beef festival. "A particular political party got involved and even the venue started getting calls," Kar said.

While most of the Facebook pages have deleted the posts after the controversy ensued, Kar provided us with screenshots. 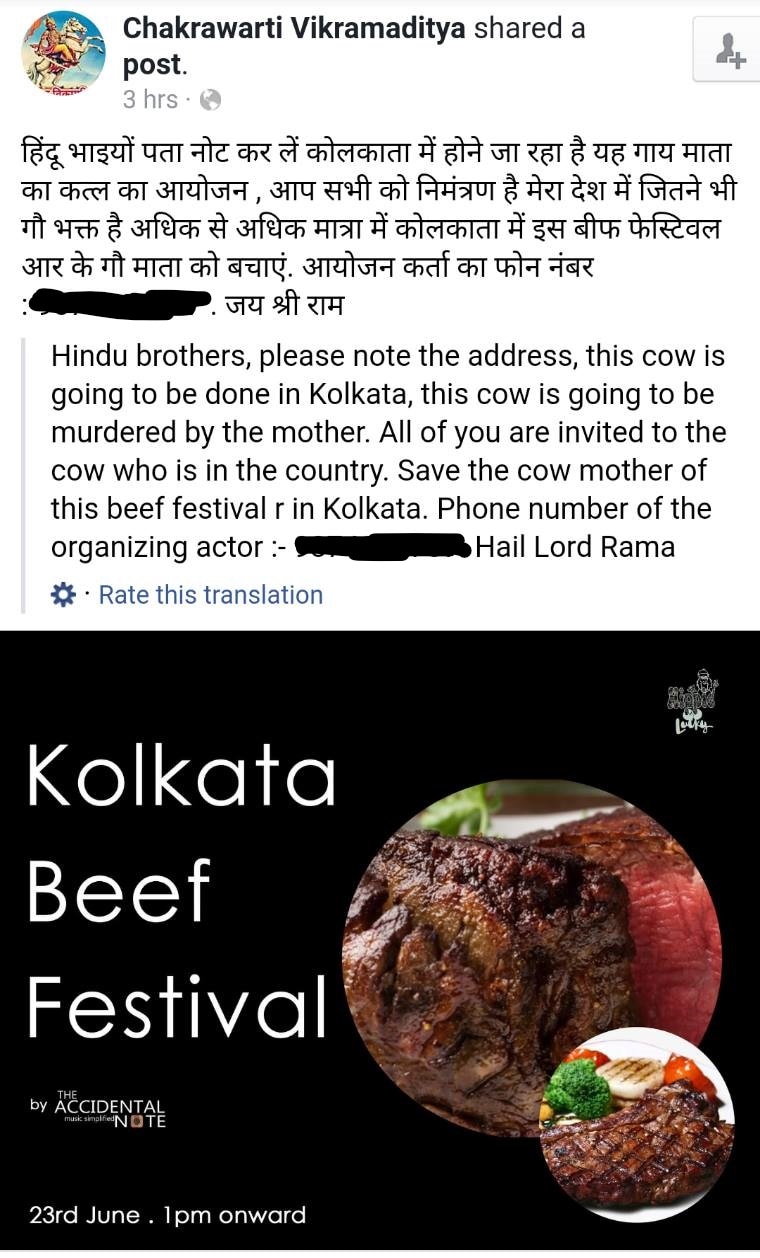 While speaking to News18, Kar emphasized that the beef festival was simply an event where people, with a mutual love for beef, could get together. He said that there is nothing political about the event. "I never knew beef was this big a deal, in Kolkata at least," he said.

"We don't want the event to be politicised. We are young chaps, who just want to enjoy a night of fun and frolic. We didn't want political parties to get involved in the first place," said one of the organisers in charge of the venue.

Kolkata has largely been immune to the effects of 'beef politics', as it is known in common parlance. While the outrage against beef penetrates the other cities, Kolkata has always welcomed diversity in terms of food with open arms. Holding secularism sacred, at least as far as food is concerned, people in Kolkata love their meat. (Read: meat of any kind).

But this may just be an indication that beef politics has infiltrated the city of joy as well.