Touching The Sky at 268m, is 'The 42' in Kolkata The Tallest Building in India?

Recently, The 42, which is located in the heart of Kolkata, created a lot of buzz as news reports of it being the tallest building in the country began doing the rounds.

Jashodhara Mukherjee
Real estate in India is booming, with skylines across the cities undergoing a rapid change. In fact, one may very well judge how urbanized a particular city is, based on the number of skyscrapers gracing the skyline, or city-scape, as the millennials call it.

Recently, The 42, which is located in the heart of Kolkata, created a lot of buzz as news reports of it being the tallest building in the country began doing the rounds. The building, which hovers over the luscious green Maidan in Kolkata, reportedly dethroned The Imperial in Mumbai to claim the title.

The 42, located in the Chowringhee area in Kolkata, is going to be 268 meters in height. It has 65 floors, and is still under construction. The building has completely altered the skyline of Kolkata. 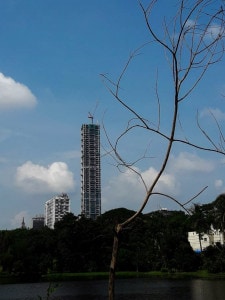 However, the building is still under construction and while news is still pouring in, let's take a look at some of the other tallest buildings in the country:

Ahuja Towers, consisting of 54 floors above the ground, is located in Mumbai and is also one of the most architecturally brilliant buildings in the country. The building houses 78 apartments, and it reportedly ranks 168 in the list of tallest buildings in Asia.

Also located in Mumbai, The Imperial Towers boast of a height of 254 meters. The buildings, located in one of the most posh areas in the city, symbolize royalty and opulence in the truest sense of the terms.

Omkar 1973, which consists of three high rise towers, consists of 400 luxurious bungalows. Imagine that! Also, one of the major attractions of the Omkar 1973 would be the splendid view that the homes offer! This is located in Mumbai too.

Located in Chennai, the Bayview towers boast of 40 floors and a whopping 204 meters in height. It is also located near the sea, with backwaters in close vicinity! The towers are also reportedly one of the tallest buildings in South India.

Whether it gets the tag of 'tallest' or not, The 42 is certainly the latest building to have made it into the big leagues!
Tags