Twitter locked Donald Trump out of his account for 12 hours and said that future violations by Trump could result in a permanent suspension. Facebook followed the suit.

In an unprecedented move, social media giants Twitter and Facebook temporarily locked the accounts of US President Donald Trump from posting to their platforms following the storming of the US Capitol by his supporters.

Twitter locked Trump out of his account for 12 hours and said that future violations by Trump could result in a permanent suspension. The company required the removal of three of Trump’s tweets, including a short video in which he urged those supporters to go home while also repeating falsehoods about the integrity of the presidential election. Trump’s account deleted those posts; had they remained, Twitter had threatened to extend his suspension. 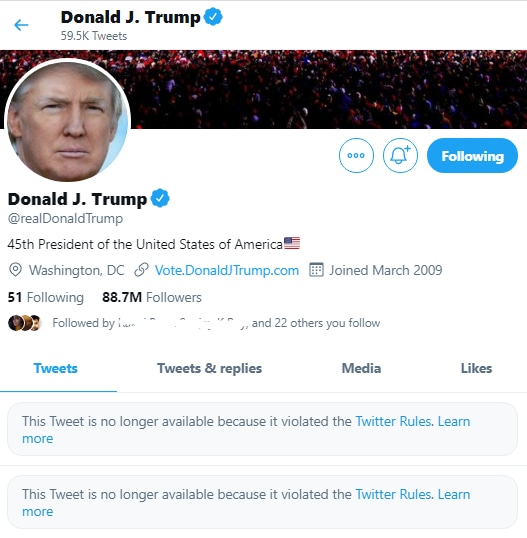 In a similar fashion, Facebook put a 24-hour lock on Trump’s account citing two violations of its policies. The move by the social media platforms was widely cheered on Twitter but many worried about Trump’s apparent access to nuclear codes.

OH, WOW! Trump must be having such a bad day.

Kudos to the social media giants for showing Trump that his time's up.

Time to leave the White House.

Facebook taking down Trump’s posts, and Twitter stopping retweets of his posts. This is cutting off his oxygen and will turn Trump into a caged, wounded animal. @DeptofDefense MUST take away his access to the nuclear codes.

It just blows my mind that Trump has been suspended on Twitter and Facebook…but leader of the free world / holder of the nuclear codes…that’s okay. pic.twitter.com/e86DXf0fZG

Just a thought. But if Twitter has decided that Trump is unfit to tweet tonight, perhaps the Cabinet should consider whether he's fit to retain control of the nuclear codes.

Donald Trump has the nuclear codes.

A source close to him says he has "lost his mind."

Mike Pence must immediately begin the process of removing the President as described in the 25th amendment.

The House must introduce Articles of Impeachment.

The Senate must remove Trump.

They need to get the nuclear launch codes from #Trump as soon as possible. We are not safe!

Donald Trump’s supporters stormed a session of Congress held Wednesday to certify Joe Biden’s election win, triggering unprecedented chaos and violence at the heart of American democracy and accusations the president was attempting a coup.

Moments after an extraordinary rally by Trump seeking to overturn the election, a flag-waving mob broke down barricades outside the Capitol and swarmed inside, rampaging through offices and onto the usually solemn legislative floors.

One woman died in unclear circumstances after being shot inside the Capitol and others were injured, police said, with lawmakers evacuated and handed protective masks as police fired tear gas.