Florida Senator Marco Rubio was brutally trolled over a GIF he shared to predict the 'wave' of his fellow Republican Donald Trump in the state.

Florida Senator Marco Rubio did an oopsie on Wednesday after he posted a tweet to predict the Republican “wave" in his home state. A Republican himself, the Senator shared a gif in support of President Donald Trump but his tweet inadvertently sent out an invite to trolls of the Internet who reminded him to pull back his tweet.

The Senator shared a simple GIF of a giant blue wave, the colour which belongs to the Democratic Party. In short, Rubio was predicting Trump’s wave in Flordia but ended up “supporting" the Presidential candidate Joe Biden instead.

In 2016 Republicans ended with a 0.6% turnout advantage in #FloridaJust wait until you see what it is this time pic.twitter.com/UvQ4ZgyfRT

In a matter of minutes, his tweet made waves on Twitter but for all the wrong reasons. Prominent personalities, journalists and citizens gathered to tell him about his goof-up.

Do you know you posted a blue wave?— Patricia Arquette (@PattyArquette) November 3, 2020

You are so g.d. stupid it hurts my feelings.— Benjamin Dreyer (@BCDreyer) November 3, 2020

does he not know https://t.co/kgPduZKsmG— Chuck Wendig (@ChuckWendig) November 3, 2020 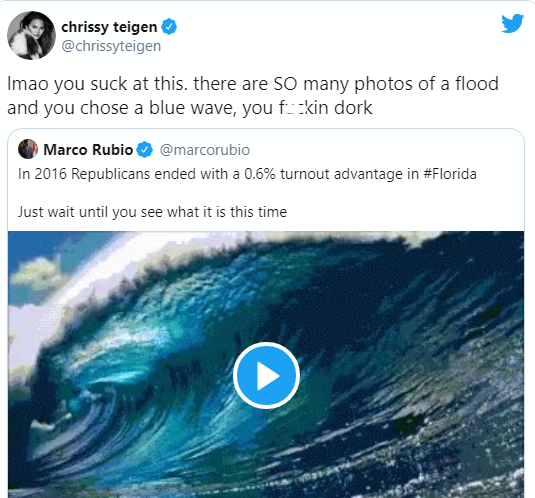 It’s too late to switch parties, sir.Plus, we aren’t in the market for ludicrous popinjays.

Earlier, Donald Trump Jr. shared a map that purportedly predicted support for his father’s Republican Party from most countries of the world.

Trump Jr shared a picture of a world map with most parts coloured in the Republican party’s red, while Mexico, India and China were shaded blue, the Democratic Party’s colour. The map, however, shows Kashmir and the Northeastern states in red.

Observing the irregularity, Congress leader Shashi Tharoor tweeted, “The price of Namo’s bromance: Kashmir & the NorthEast cut off from the rest of India, &the whole “filthy" place relegated by Don Jr to the realm of hostiles, along with China&Mexico. So much for the crores spent on obsequious serenading stadium events!"