Home » News » Buzz » What Do Delhi Women Feel About Kejriwal's 'Bhai Dooj' Gift? I Found Out on a Free Bus Ride
4-MIN READ

What Do Delhi Women Feel About Kejriwal's 'Bhai Dooj' Gift? I Found Out on a Free Bus Ride

Arvind Kejriwal called it his 'Bhai Dooj' gift to the women of Delhi. But will his sisters return the gift in votes?

Rakhi Bose
On Tuesday, I did something I have literally never done. I rode a public bus to work.

The Delhi government rolled out a travel scheme that offers free rides to women in the national capital in over 5,500 state-run buses. Women travelers will be given special pink tickets in Delhi Transport Corporation (DTC) and cluster buses to avail the free-ride scheme.

Calling it his bhai dooj gift, Delhi Chief Minister Arvind Kejriwal tweeted, "The country can progress when the women will progress."

So when I boarded the DTC bus from Vasant Kunj and the conductor asked me to get my ticket, I was naturally surprised. The smiling conductor seemed to guess my confusion and urged me to come forth, nonetheless. Instead of pulling out a ticket from the regular stack, he fished out a new, pink stack of slips and handed me one.

A woman's outline peeped up from the bright pink paper in my hand with the words "single yatra (travel) pass" printed under it. On the back was a message in Hindi addressed to me by Kejriwal himself. Translated roughly, it read, "I want great prosperity for you and your family. When women progress, the country progresses". The note was signed and stamped with a pixilated photo of the CM's face. The high yet seemingly cost-effective production value of the endeavour was impressive. Anita Singh, a fellow commuter who takes the same bus to Saket every morning where she works as an instructor at a coaching institute, joked that Kejriwal was ensuring no one forgot his face.

With the crucial 2020 Delhi elections approaching, maintaining visibility may not be such a bad thing for the Aam Aadmi Pary, which failed to perform as per expectation in the Lok Sabha elections despite boasting of star candidates.

The clever symbolism of implementing the scheme on 'bhai dooj' - the festival celebrating the protective bond of love between brothers and sisters - was not lost on women commuters, many of whom graciously accepted Kejriwal's gift. But would the sisters return the gift in votes?

"I would. It is going to help me save quite a lot of money as I regularly use the bus to commute," says Anita. The 29-year-old is the sole bread-earner for herself and her elderly parents and felt that though it seemed like a small amount, freeing bus fares for women would mean commuters like her could save about Rs 25-50 spent on bus fares in a day.

Rajinder, a 38-year-old homemaker who lives with her husband and three children in Mehrauli felt it would make it easier for her and her daughters, 12 and 14, to travel by themselves. "I don't have to worry about change. And when we think collectively, our entire family will be saving," she said.

But not all were of the same mind. Bilkis, a migrant who works as a domestic helper in Hamdard Nagar said that rides should be free for men too. "My husband earns Rs 100-Rs 200 a day as a daily worker. Some days he doesn't earn at all, she told News18. All public transport should be free for all, she added. 22-year-old college student Amanat Gill felt that it shouldn't be free for all but only those below the poverty line. "The government can even set a new bar to asses candidates economically," Gill suggested.

For someone like me, riding a free bus to work would help me save well over Rs 20,000 a year. But is it really feasible? It's not like I can take the bus to work every day. I live about 24 km away from work and using the metro is far more cost-effective and time-efficient for my specific needs. I boarded the 717 that terminates at Badarpur Border and rode it till Lado Sarai. From there I got on the 34 to Botanical Garden, Noida. It took me almost two hours, an hour more than the time I take via the metro. To shift from the metro or private transport to buses, one would need more than just free rides.for example, boosting availability of buses plying on various routes that can be easily navigated. 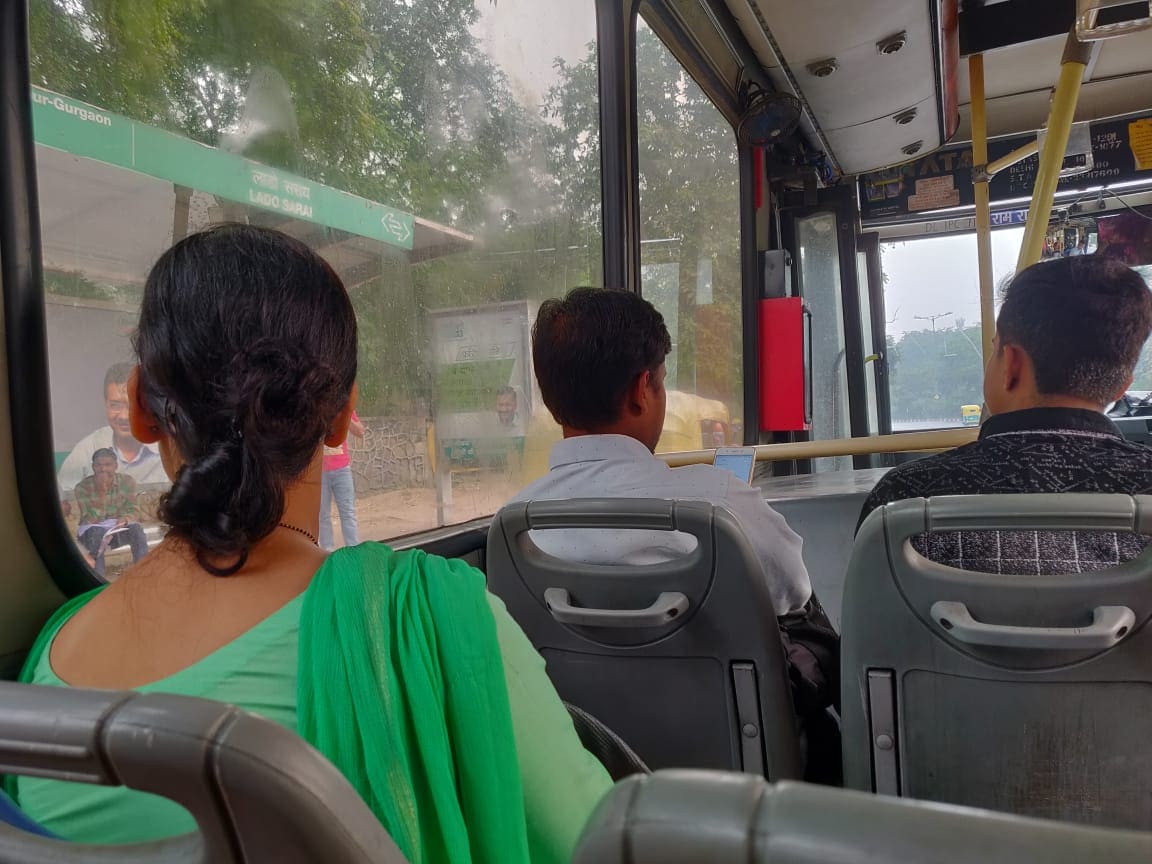 When Kejriwal announced the free-rides scheme for women during his Independence Day speech earlier this year, he had said that both Delhi Metro Rail Corporation trains as well as DTC and cluster buses would be free for women. While implementing the same on buses has been easier, the metro bid has been met with opposition from various quarters.

In August, Delhi government announced setting aside Rs 290 crore for implementing the free metro for women plan. However, the Supreme Court in September put a dampener on the Aam Aadmmi Party's pre-poll sop by warning the party that making metro free for women would economically cripple the institution.

As of now, however, the free scheme has been implemented on the 3,700 DTC buses and 1,800 buses under the cluster scheme of the Delhi Integrated Multi-Modal Transit System (DIMTS). The pink tokens, each with a value of Rs 10, would be reimbursed by Delhi government.

So does that mean more women will ride the bus now?

Amanat Gill felt that buses were okay to ride as long as it was day time. "At night, the men on the bus make me feel really insecure. The conductors are hardly supportive," Gill, who travels to Noida every day from Kalindi Kunj, told News18. Though the distance is not very long, Gill said that the road was often dark. "Making buses free does not mean they become accessible or even safe for women," the student said.
Tags