Dhaliwal was in Delhi for a special screening of ELKDTAL on Valentine's Eve and was overwhelmed by the response she received from the members of the queer community who attended the event.

It was halfway through a special screening of 'Ek Ladki Ko Dekha toh Aisa Laga' in Delhi when the lights dimmed at interval and the crowd was introduced to Gazal Dhaliwal, the writer of the Sonam-Anil Kapoor-starrer. Nothing about the film, the crowd or the writer is what you would call mundane. Yet the palpable admiration the audience held for the woman who had just ushered in front of the silver screen was discernible from their hushed whispers and reverant bodies leaning forward in anticipation of her words.

Fixing her pink dupatta and lustrous hair, Dhaliwal took to the microphone and said, "I've watched this film in theatres with regular audiences four times and each time some peole have left at half time. But tonight, I think everyone will stay."

The crowd burst out in applause and the tension was broken. It's as if they all instantly knew Dhaliwal, this woman swathed in green and pink who had written the first mainstream romantic comedy film about a same-sex female couple in Bollywood.

As the film's second half delved into the confusion and isolation faced by queer children in school and at home, many in the audience sighed, shed tears and recalled the pain and frustration they as well as Dhaliwal herself had probably felt at some point. The empathy and trust were mutual as a majority of those in the audience were queer and Dhaliwal, herself, a post-operative transwoman.

Members from Delhi's LGBTQIA+ community had gathered on the eve of Valentine's Day to watch the special screening of the film and meet the writer who had become a source of inspiration to many.

It’s not rocket science to understand why film industries like to release romantic films during Valentine’s Day. But for the millions of queer people in India, romantic films, particularly on Valentine’s Day usually end up as further reminders of their exclusion from the binary definition of love and togetherness.

So when a film like ‘Ek Ladki Ko Dekha Toh Aisa Laga’ released, many were overwhelmed. However, though the reviews and reactions were warming, the film has not raked in profits.

Speaking to News18 before the screening, Dhaliwal said this could be the result of audiences not taking very well to the very new and almost unprecedented subject of the film.

“It is like a ‘coming out’ film for Bollywood. When a queer person comes out, it is not always easy for friends and family to understand and accept the change. It’s the same with ELKDTAL” Dhaliwal said. Speaking to News18 at a special screening of the film in Delhi, the talented writer said that this discomfort at being confronted with difficult truths may be the reason why the film’s earning did not match its reviews. 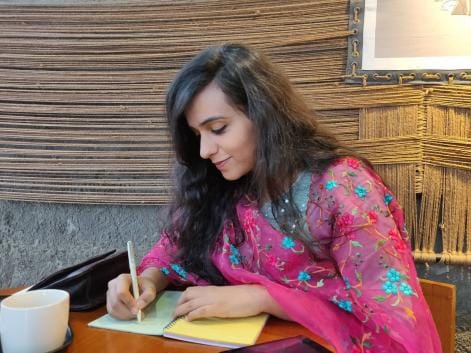 (Dhaliwal is an active voice in the LGBTQIA+ community as she herself is a tras-woman who underwent Sex Reassignment surgery at the age of 25. Before writing her own film, Dhaliwal has worked on films like Wazir and Lipstick Under My Burqa)

ELKDTAL is a sensitive film (even too safe even, at times) and is completely suitable for family viewing as it is made with the same commercial approach one can find in many other Bollywood romantic-comedy films. However, Dhaliwal felt that despite the cookie-cutter mould approach, many straight people still were wary of the film, especially families.

Nevertheless, the impact of her film on the queer community could be seen in the applause and compliments she received from members of the queer community who attended the Feb 13 screening of the film. Muffled sobs and sniffles could be heard throughout a packed movie theatre as scenes with Sweety (Sonam Kapoor) going through the trauma of not understanding, rejecting and slowly learning to hide her sexuality in order to survive as a child unfolded on screen. It was evident that many of those present had gone through similar experiences of being misunderstood, bullied or ignored as children.

"It was like I was living through my own life. I have not yet told my parents about my orientation and it's a struggle every day. This film for the first time makes me feel like it's okay," said a 16-year-old girl who identifies as homosexual and had come to attend the screening and to meet Dhaliwal, a hero among the community.

The reason for this popularity and why certain moments of the film rang out with such honesty may perhaps be a result of Dhaliwal’s own sexuality and her vocal activism for the LGBTQIA+ community. (Dhaliwal speaking to fan from the Queer community before the screening)

Dhaliwal underwent Sex Reassignment Surgery (SRS) in 2007 at age 25. However, she had realised at the age of five that she was a girl trapped in a boy’s body. From then till the age of 17, Dhaliwal’s sexuality was a constant struggle. While the inspiring writer from Punjab initially started her career as a software engineer, her love for writing and cinema soon drew her to Mumbai where she started working on Bollywood films.

In fact, ELKDTAL is not Dhaliwal’s first film. Previously, she has worked on films like Wazir and written the dialogue for Lispstick Under My Burqa.

Defending criticism for her latest venture not digging deep enough, the writer said “I have grown up on Shah Rukh Khan films in which the hero and heroine always found love in the end after a tonne of masala. That was the kind of film I wanted to make about a queer love story.” Dhaliwal said that to normalize things, they needed to be seen through the lens of normality.

K (name changed) who identifies as a trans-boi and who attended the event with his friends said that this was the first time they had celebrated Valentine’s Day with a Bollywood film based on a queer love story.

“With this film, many queer couples could actually celebrate their own brand of love and not have to hide beneath the shadow of hetero-couples,” he said. But does Dhaliwal herself think that there are enough options for queer couples to enjoy Valentine’s Day? The writer blushed and demurely said that she wasn’t one to go out a lot but that she did seem to miss seeing any concerted marketing pushes to include the queer community in the celebrations.

“There are the usual places that you can go to in town. But I hardly saw any new companies or initiatives for inclusive Valentine’s Day,” Dhaliwal said. Though Section 377 was decriminalised six months ago, acceptance of queer couples remains low and many do not yet understand queer love.

Films like ELKDTAL, and others like Kapoor and Sons, could go a long way in changing negative perceptions of queer relationships and greater acceptance and appreciation for them. But more than that, such films especially when they come from people from within the community, seem to play an important role - empowering others.

"This film and people like Gazal mean so much to the community. So many of us face discrimiation. But looking at her, we feel that we too can become writers, directors even actors. We stoo can get succesful," said Vanita (name changed) at the end of the film. "She is an inspiration to all of us," she said.