During Chennai Super Kings vs Kings Xi Punjab toss in Abu Dhabi, Dhoni revealed about his plans for Indian Premier League and CSK.

Chennai Super Kings met up with Kings XI Punjab in Abu Dhabi on Sunday to play their final match of the IPL 2020 tournament after failing to make it to the playoffs this year.

The year for the Men in Yellow has been particularly rough, languishing on the points table for the major part of it. The disappointing run in the season especially comes as a shocker for the Whistle Podu fans, who have seen CSK lifting the trophy thrice before.

However, the team has managed to gain some momentum in the previous few matches, playing the perfect spoilers for the other teams lurking around the corner, hoping to sneak into the playoffs.

In no time, google searches in India showed a massive spike, as anxious followers of "Thala" really wanted to know if the skipper was bidding goodbye to IPL. 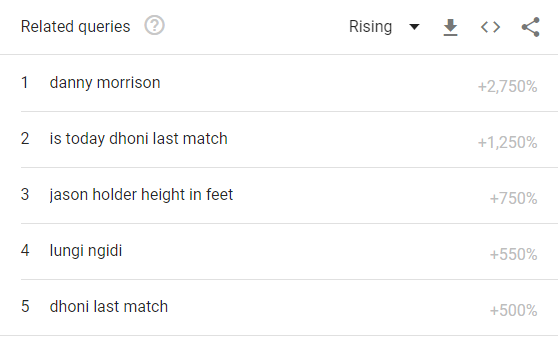 There is, however, good news for the Dhoni fans as the CSK captain has no plans of hanging up his boots. In fact, during the CSK Vs KXIP toss on Sunday, MSD confirmed that he will turn up for CSK in IPL 2021.

Replying to commentator Danny Morrison's query on whether this will be his last ever game in yellow, Dhoni said - 'Definitely not'.

Danny Morrison : Could this be your last game in yellow ? #MSDhoni : Definitely Not!#CSK have won the toss and they will bowl first against #KXIP in Match 53 of #Dream11IPL pic.twitter.com/KhaDJFcApe

Soon after, Dhoni fans celebrated the news by trending #DefinitelyNot on social media.

Danny Morrison - Could this be the last match of yours in yellow jersey?MS Dhoni - pic.twitter.com/fxQFthK7e1

#DefinitelyNot This made my day @msdhoni will continue in IPL 2021 @ChennaiIPL pic.twitter.com/RtFQINYMls

Lately, Dhoni has been under criticism for constantly backing struggling senior players over younger options in the IPL 2020, but he's all set to continue next year as well. The CSK skipper has made only 200 runs from 12 innings this IPL.