At a time when the world is shutting down its borders and countries are largely under lockdown with a strict 'STAY HOME' advisory to all citizens, the leaders decided to shake hands, virtually.

Leaders of the world's major economies pledged $5 trillion to battle the spreading coronavirus pandemic and committed to do “whatever it takes” to minimise the social and economic damage. They did all of this through a video conference.

At a time when the world is shutting down its borders and countries are largely under lockdown with a strict 'STAY HOME' advisory to all citizens, the leaders decided to shake hands, virtually.

“We are injecting over US $5 trillion into the global economy, as part of targeted fiscal policy, economic measures, and guarantee schemes to counteract the social, economic and financial impacts of the pandemic,” the leaders said in a statement after an emergency online summit.

In a two-hour meeting, the leaders agreed to assess gaps in pandemic preparedness and increase funding for research and development in vaccines and medicines.

A particular photo from the session showed leaders of the G20 countries--whose members include the US, the UK, India, Brazil, European Union, Russia – and agencies like the United Nations and the World Health Organization (WHO), among others--all beaming into the session from their offices or homes. India's Prime Minister Narendra Modi who has announced a 21-day lockdown in the country, stressed the need to look at globalisation and multilateralism not just through the prism of economic and financial issues, but also through humanitarian aspects. PM Modi had first proposed the 'online' G20.

COVID-19 is a global crisis and it demands a global response. That was the focus of our G20 Leaders’ call today - where we agreed to work together and spare no effort to keep you safe and our economies strong. For more details, read our joint statement: https://t.co/kYONSOkVsp

On March 15, PM Modi had marshalled a video conference among SAARC leaders — locking India’s intent to lead the fight against Covid-19 virus in South Asia.

They didn't stand next to each other, for the grand photo session-- a norm before the pandemic's existence.

Photos showed PM Modi, US President Donald Trump, China's leader, Xi Jinping and France's President Emmanuel Macron among the leaders present on the virtual conference call, which was being hosted remotely by the King of Saudi Arabia.

Canadian PM Justin Trudeau joined the conference from his home in Ottawa, where he is in quarantine after his wife Sophie Gregoire Trudeau tested positive. Angela Merkel is also working from home after being treated by a doctor who has since tested positive, although the chancellor's own tests have come back negative. 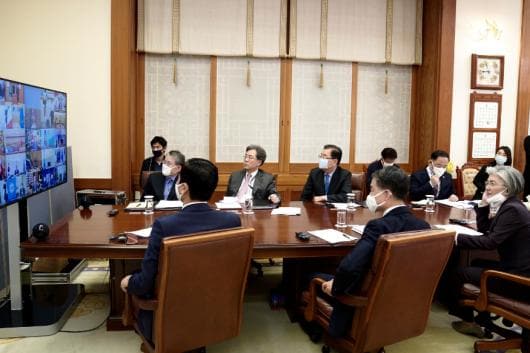 There were no small pull-asides, private huddles and quiet whispers-- the usual routines of the yearly G-20 Summit. For the first time, there were no government planes touching down in the host city, no hotels filled wih leaders and their bodyguards. There were no photo-ops neither were the anti-globalist protesters.

Opening the meeting, the aging Saudi King Salman -- this year's G20 president -- said the "human crisis requires a global response. The world counts on us to come together and cooperate in order to face this challenge."

At a time when the world seems a little fractured after the virus, that disregards borders or economies, has infected 532,230. So far, 24,078 people have.

On Thursday, India recorded 88 new cases-- the highest in a single day. The global tally, according to the AFP, also crossed the figure of 500,000 infections and close to 22,000 fatalities.

"I hope that today’s summit will serve as an opportunity to reaffirm the G20 members’ solidarity to overcome COVID-19 together."

"We agreed to work together and spare no effort to keep you safe and our economies strong," Justin Trudeau tweeted, along with the joint statement of the G20 leaders.

While the statement did not outline any new or specific measures the G20 was taking, it said leaders were ready "to react promptly and take any further action that may be required." In all of this, the leaders have proved one thing: The world's biggest important meeting can also be held, online. And that means, cutting the cost of air travel and reducing carbon footprint. It could be a way more cost-effective way for countries even after we get to a post Coronavirus world.

The biggest companies in the world have moved to virtual meeting following the Coronavirus outbreak. In China, employees are flocking to platforms like WeChat Work, Zoom and Alibaba’s DingTalk. Belgian technology company Barco, which has offices in India as well, aims to revolutionize conferencing based on the concept of BYOM (Bring Your Own Meeting).

Last week, U.S. Securities and Exchange Commission said that companies will be allowed to announce in regulatory filings that they are conducting “virtual” shareholder meetings without sending out a fresh proxy statement. Citigroup Inc. and Bank of America Corp. has announced that they are considering alternative arrangements for their meetings.

Battling coronavirus may be an uphill task, but in these challenging times, it has shown that world leaders are capable of coming together without flying miles. The world of online diplomacy may just be our future.