When Yelp, the American local-search service powered by crowd-sourced review forum, had to fix a bug, they ended up deleting everything on the app.

So when Yelp, the American local-search service powered by crowd-sourced review forum, had to fix a bug, they ended up deleting everything on the app.

The Yelp app which is available only on Apple devices 'Version History' shared that they 'had trained a neural net to eliminate all the bugs in the app and it deleted everything.'

A neural net, known more commonly as neural network or Artificial Neural Network(ANN) is a computer system modeled on the human brain and nervous system.

Neural networks process information in a similar way the human brain does. The network is composed of a large number of highly interconnected processing elements(neurones) working in parallel to solve a specific problem.

So how does this Neural networks work? They learn by example. According to a research paper that Christos Stergiou and Dimitrios Siganos of Imperial College London wrote-- "They cannot be programmed to perform a specific task."

This is perhaps why the bug fix didn't work properly.

Yelp, however, had a good laugh about it too. 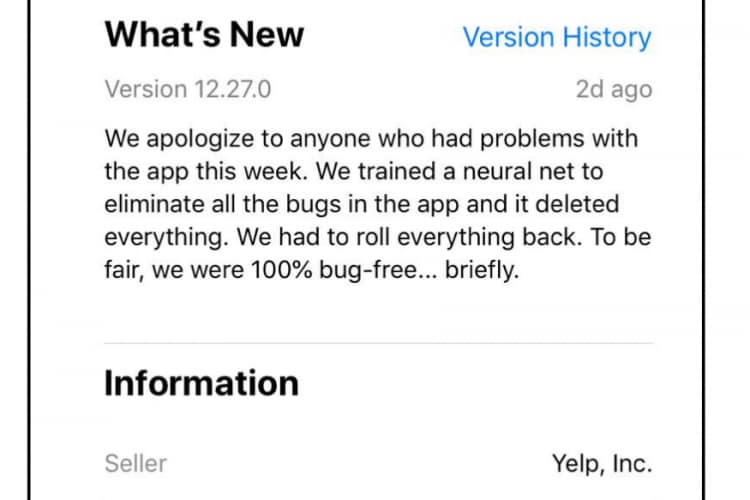 This is what happens when man-made technology fails at man-made inventions.