Save the environment and also earn a free beer for it, by picking up trash on Goa's beaches and exchanging them at the 'Waste-Bar.'

While drinking beer on a beach in Goa may attract you a fine of Rs 2000, cleaning up beer bottle caps may actually earn you a free beer!

Goa, which is known primarily for being a tourism hub and attracts over 7 lakh tourists in a year, also ends up generating a lot of waste from these tourists littering the beaches.

In an initiative to go green, conceived by Drishti Marine, and the department of state tourism industry in Goa, the new initiative lets you exchange garbage from the beach for a beer.

The price of one beer costs ten beer bottle caps or twenty used cigarette butts, and you can exchange them at a Goan beach. After the initiative was kicked off on January 30th, Zanzibar on Baga Beach became one of the first waste-shacks to start this exchange.

"The waste bar is a win-win concept. It is positive for the venue as it is a positive event that attracts a crowd. You get very happy customers as they feel they contribute to the society and get a free drink for it. And for brands, it helps in positioning," Noreen van Holstein, who conceptualised the campaign along with Drishti Marine, told IANS.

And it's not just cigarette butts and bottle caps - used plastic straws will also get you a cocktail or a chilled beer. More 'waste bars' are scheduled to open in the next few months.

#TeraMeraBeach, which is a collaboration of organisations running a campaign to build awareness and knowledge around cleanliness and waste management on the beaches of Goa, also became a part of this initiative, creating an event for the 'waste bar.' 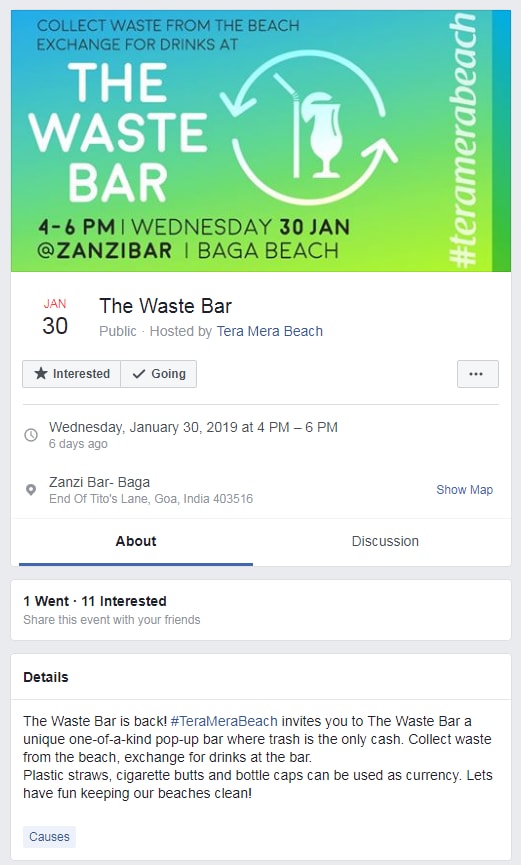 Well, if you don't want to pay the fine and enjoy a free beer in Goa, you now know how to, while simultaneously saving the environment - the perfect win-win situation.
Tags: