Who is Binod and why is everyone talking about him?

In a stand-up gig back in February, Anubhav Singh Bassi had famously said, "Koi sense hai iss baat ki? (Does this even make sense?)" and the comedian had pretty much summed it all.

2020 is a year of bizarre trends and if the Internet had already convinced you that everything around you is cake, think again.

Because a month later following the weird dessert trend, everything and everyone now is Binod.

Who is Binod, you ask?

Slayy Point, a famous YouTube channel run by Abhyudaya and Gautami recently went down the rabbit hole that is the Indian comments section in one of their videos and a meme was born.

Both Abhyudaya and Gautami gave us a glimpse of what really goes on in the "filthy" comments section of videos where the commenters leave behind stuff that will have you scratching your heads. From "thoko likes" to penning down out of context poetries, a lot goes on in the comments' world.

Titled "Why Indian Comments Section is Garbage (BINOD)," one of the comments that stood out in their now-viral video was from a certain person Binod Tharu who simply wrote "Binod". Was he marking his territory? Probably.

But guess what? Internet latched on to it so much so that Binod has become the top trend on microblogging site Twitter.

*Everyone is in love with the name #binod *Meanwhile Vinod: pic.twitter.com/NeqbmPpanI

Me to myself who was trending #binod today pic.twitter.com/zo1XMGpmB0

#binod No one :Memers rn : pic.twitter.com/dWVpJltiif

#binod is now trending on Twitter*Le memers be like:- pic.twitter.com/6nNIXLApoi

I found the real picture of #binod pic.twitter.com/mswhEsMCAI

Sorry to beak it, but I am #binod pic.twitter.com/dsNsnPuwEt

#binod after writing B I N O D in the commentLe binod: pic.twitter.com/wj6h76iqmO

This is where it all started.

The meme has gotten so popular in the past few days that Slayy Point went ahead and changed the description in "About" section on their YouTube channel to this: 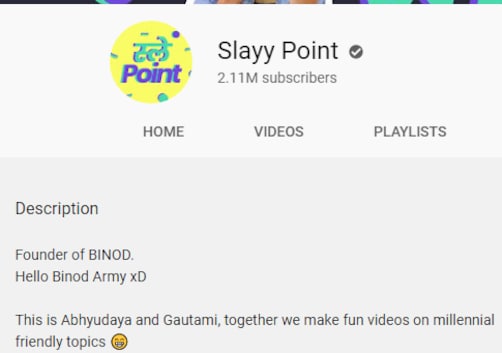