One of the cleanest strikers of the ball and the man who starred in India's triumph in 2007 T20 World Cup and 2011 World Cup victories, Yuvraj Singh, has hung up his boots after 19 glorious years of service to the Indian Cricket Team.

One of the cleanest strikers of the ball and the man who starred in India's triumph in 2007 T20 World Cup and 2011 World Cup victories, Yuvraj Singh, has hung up his boots after 19 glorious years of service to the Indian Cricket Team.

"I have been playing international cricket on and off for 17 years. Now, it is time to say goodbye, to move on and walk away. It has been a roller coaster ride and a great story but it has to come to an end," said an emotional Yuvraj in a press conference on Monday. "This is the best time to move on," he added.

The 37-year-old is remembered for famous 2002 Natwest Finals win against England, where he along with Mohammad Kaif put up a spirited 121-partnership.

One of the greatest match-winners in the history of the game,a fighter who built an extraordinary career through difficult challenges & came out a winner every time-We all are so proud of you #YuvrajSingh , u can be very proud of what u have you done for our country @YUVSTRONG12 pic.twitter.com/w4wUe31De0

This was the day when Yuvraj smashed the fastest fifty in a T20I - which he scored in just 12 deliveries in the 2007 T20 World Cup against England. The match where he hit Stuart Broad all around the park for 6 sixes in an over? Yes, that one. This fifty still remains the quickest fifty in T20Is.

Happy birthday to man of the series of u15 world cup 1996, u19 world cup 2000, t20 world cup 2007 , odi world cup 2011 and a fighter fought against cancer beating it and came back in indian squad team again like a Sher named yuvraj singh #HappyBirthdayYuvi pic.twitter.com/cKzDo6vlgM

But it was his 2011 World Cup campaign for Men in Blue that will be remembered for ages.

The stylish left-handed batsman was instrumental in India's thumping victory in the 2011 World Cup tournament. With 362 runs (one century and four half-centuries) in 9 matches at an average of 90, Singh rose to the occasion and how. His contribution with the ball also came in handy as the Chandigarh boy picked up 15 wickets in the big tournament and went on to take the Player of the Tournament title. Yuvraj Singh posing with the 2011 ICC Cricket World Cup trophy with The Gateway of India monument in the background during a photo call at the Taj Mahal hotel in Mumbai. (Image: AFP)

There came a major hiccup in the power-hitter's life when he was diagnosed with a life-threatening disease but the fighter that he is, Singh fought against all odds, won his battle against cancer and even made his comeback in the international cricket. 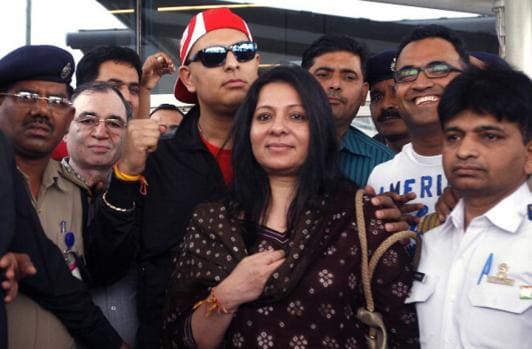 Naturally, Yuvi saying bye to the cricket was an emotional moment not just for the cricketer but also his loyal fans and followers across India.

As the big news of his retirement hit on Twitter, users on the microblogging site came out in numbers to bid farewell to the celebrated cricketer.

The man who starred in India's 2007 World T20 and 2011 World Cup victories, @YUVSTRONG12 announces his retirement from International cricket.

"After 25 years in cricket I've decided to move on. Cricket has given me everything I have. Thank you for being a part of this journey” : #YuvrajSingh pic.twitter.com/Ez8y49KlH2

One of the finest left hand batsmen in #Indian cricket to have played white-ball cricket #YuvrajSingh aka @YUVSTRONG12, announced his retirement from international cricket and all formats of the game. Thank U sir for your all round display. pic.twitter.com/T91Uj9D2NA

#YuvrajSingh
Thank you So much for giving us such beautiful memories :)

What an innings Yuvi ❤️ India will forever remember this 😍 #YuvrajSingh pic.twitter.com/aax8Zm6Qmy

We alll miss the world cups hero and the legend #YuvrajSingh pic.twitter.com/HgF45NCRF0

#YuvrajSingh is Player for Life Series.

RT if you will missing this man for this 6 sixes 😍#YuvrajSingh pic.twitter.com/KVn8qRt1xP

Thanks Yuvi , for all the memories .

Watching you in full flow was a visual treat .

Players will come and go,but players like @YUVSTRONG12 are very rare to find. Gone through many difficult times but thrashed disease,thrashed bowlers & won hearts. Inspired so many people with his fight & will-power. Wish you the best in life,Yuvi #YuvrajSingh. Best wishes always pic.twitter.com/sUNAoTyNa8