Medical Colleges in India Increased by 67% in Last 8 Years: Centre

The number of UG and PG medical seats has increased by 87 per cent and 105 per cent, respectively, the ministry said (Representational/File)

A total of 261 colleges have been added to the country's medical education system during the last eight years. The number of undergraduate medical seats has increased from 51,348 in 2014 to 96,077 in 2022, the ministry said

Also read| How Expensive is Medical Education in India?

As of now, of these 157 medical colleges 93 have already become functional and 60 are expected to be functional in the next two years, the ministry said. 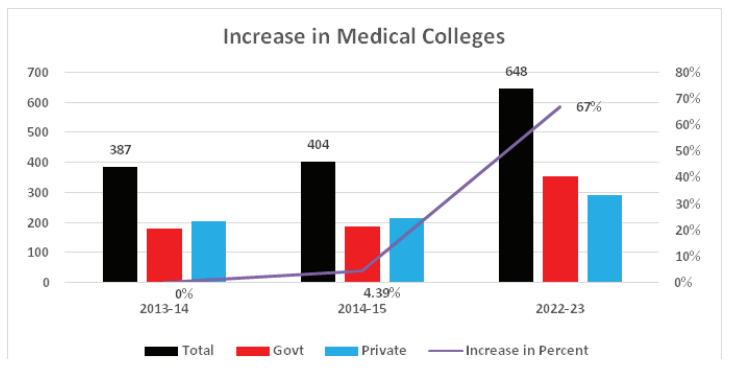 The health ministry in a booklet named Governance Reforms In Medical Education (2014-2022) has highlighted the changes, advancements, and new rules in medical education under Prime Minister Narendra Modi’s administration. The booklet states that the central government’s reforms have created opportunities for improving quality, access, and equity in the provision of a qualified and skilled health workforce.

The ministry further asserts that in 2014, India had only 387 medical colleges and the system had a lot of issues. A disconnect existed between education and health service delivery, as well as a high cost of education, and underutilization of existing resources among other things.

Amidst an incredible rise in the number of UG and PG medical seats, colleges are experiencing a shortage of educators/teachers, resulting in poor-quality training of medical students.

The government has said that by investing in expanding GMCs, it is ensuring that a larger population attains affordable professional education. However, based on a new Lancet study published on October 29, this year, the cost of medical education in India is skyrocketing.