MP Board 10th Results 2022 LIVE Updates: Madhya Pradesh Education Minister Inder Singh has declared the MP Board class 10 results at a press conference. The link to check the class 10 and class 12 results for the Madhya Pradesh Board of Secondary Education (MPBSE), Bhopal has been activated at the official websites, mpbse.nic.in, mpresults.nic.in, mpbse.mponline.gov.in, and news18.com. A direct link to check the score will be Read More

Out of 1,14,678 candidates who registered in private mode, as many as 97,838 students took the exam while the rest were absent. Among them, the result of 72 students was withheld while for 553 students the exam was canceled. Of the total rest is declared for 97,213 students of which only 18,953 students or 19.49% have passed. Among the rest, 10,531 students will be eligible for supplementary exams while 67729 have failed.

Among districts, Damoh has the highest pass percentage of 83.80% followed by Alirajpur with 82.44%.

MP Board class 10 result for private candidates was at an all-time low as only 19.49 per cent of students who took the exam could pass. The pass percentage secured by regular students was at 56.84%. A total of 3,55,371 students failed in class 10th. Last year, more than 3 lakh had got first division.

In MP Board class 10 results, girls have performed better than boys. The overall pass percentage was 59.54%, and the pass percentage of girls was 62.47%. While among boys only 56.84% of those who took exams could clear the exam. Further, the top rank was also secured by girls.

MP Board has received one of the highest pass percentages in terms of class 12, with as many as 72.72 per cent of students who took the exams cleared it. For class 10, the pass percentage remained low with slightly more than half of the student passing exams. For MP Board class 10th,  59.54% of students cleared board.

MP Board class 10 and 12 board exams results declared. Indersingh द्वारा माध्यमिक शिक्षा मंडल मध्यप्रदेश की कक्षा 10वीं और 12वीं के परीक्षा परिणामों की घोषणा. MP Board became the second board to announce results, the first was Bihar Board. Many other boards icnlduing CBSE and ICSE are still conducting exams. This is the fastest results by MP Board in the past five years.

Students who could not clear the MP Board exam this time. Will have a second chance at the boards. Students can appear for class 10 and class 12 board exams again in August/ July. Exact dates are yet to be out. After two years, MP Board will be releasing its merit list today along with results. The merit list will have the name and marks obtained by toppers in the class 10 results. Last year, the toppers had obtained full marks in their MP Board exams. Not just rank 1 but top 10 rankers will be there in the MP Board merit list. In 2021, merit was not released becuase exams were not held and result was announced based on alternative criteria. For class 10 board exams, a total of 15 students had jointly shared the topper position with 100 per cent marks. In 2019, Gagan Dikshit and Ayush Tamrakar of Sagar district had shared the topper position in the MP board class 10 merit list of 2019 with 499 out of 500 marks. Last year, no merit list was released.

As per MPBSE’s marking provision, the candidates are evaluated out of 100 marks in each subject. While 80 marks are awarded on the basis of theory paper, the rest 20 are given on the basis of performance in project work or practicals conducted during the academic year. Candidates need to score of a minimum of 33 per cent mark in total as well as separately in theory and practical exams to be declared passed. The passing mark for the theory paper of MP Board is 25 whereas, in practicals, it is eight, as per rule.

MP Board 10th, 12th Results: Students to get full marks for these questions

After a large number of errors were found in MP Board question papers, the MPBSE had decided to give extra marks to students for wrong questions. Most of the errors have been reported in the class 10 mathematics question paper. In addition to this, many other exams including class 12 chemistry also had wrong questions along with other subjects. All those students who attempted these questions will get full marks. 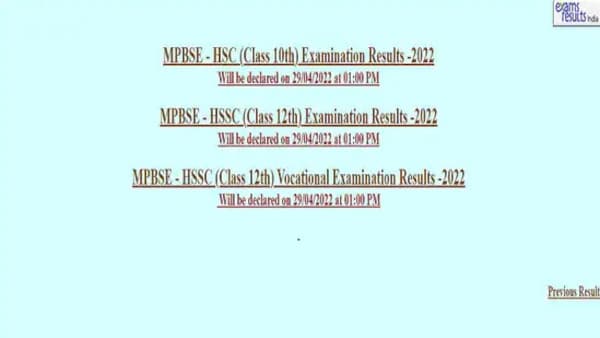 MP Board Result: How to Download via Mobile App

Step 1: Go to Google Play store on your phone

Step 3: Install the application on your phone. Note that the installation will happen only if you are logged in to the play store with your Google account.

Step 4: Open the app and select the MPBSE result link to know your score

Step 5: Fill in your credentials to login to the app

Step 7: The MPBSE result will be displayed on your screen

Step 8: Check and download the MPBSE result and save a copy for future correspondence

MP Board Result: How to Download via Mobile App

Step 1: Go to Google Play store on your phone

Step 3: Install the application on your phone. Note that the installation will happen only if you are logged in to the play store with your Google account.

Step 4: Open the app and select the MPBSE result link to know your score

Step 5: Fill in your credentials to login to the app

Step 7: The MPBSE result will be displayed on your screen

Step 8: Check and download the MPBSE result and save a copy for future correspondence

MP Board Result Also Via SMS

Do not have an internet connection or power supply? Do not worry, MP board is also releasing its result via SMS, to avil the facility students have to follow thee steps –

Step 1: Open the message body of your phone and write MPBSE12 (Roll Number) for class 12 and MPBSE10 for class 10th results

Step 3: Send the message and receive your result in a reply.

MP Board 10th, 12th Results: Students to get full marks for these questions

available at News18.com. The result will be announced via a press conference from the Board’s official headquarters.

This year’s top-ranking student is Nancy Dubey with 496 marks. She holds the rank jointly with Suchita Pandey. There is a tie at second rank too with Ayush Mishra and Narayan Sharma scoring 495 marks, each.

To pass their board exams, students need to score at least 30 per cent marks. Further, since the theory and practical exams are divided into two sections, the students need to pass both theory and practical aspects of the exam separately. Students can expect their pass percentage to drop this year as last year all those who took the exam were promoted to the next class based on an alternative assessment.

MPBSE is the second among state and central educational boards to have announced results this year. Not only 10th but also the 12th results will be announced today. The result comes at a fast speed this time, much ahead of the central boards including CBSE, CISCE etc. Only Bihar Board has announced its results so far. This could also be possible as MP Board has for the first time held its final exams in February. Usually, the boards are held much later.