NEET 2021: Most of the students found the medical entrance exam - NEET 2021 - held on Sunday to be moderately difficult. With tricky questions, especially in the physics section, the exam is being considered to be slightly tougher than last year. Several questions in the exam were based on a new format.

There were many new types of questions like assertion type, match the following etc in the medical entrance, informed Saurabh Kumar, Director Academics, Vidyamandir Classes. “Such questions used to be part of AIIMS entrance. Now that AIIMS and JIPMER also enrol through NEET, the exams were a mix and were of a good assessment level," he said.

“In Zoology, certain questions appear to be easy at the first glance, but they are twisted and require precision and focus on the keywords. The surprise factor was a question on earthworm which only those would have attempted who were well versed with NCERT, said Tiwari.

Botany too had some difficult questions. While most of the questions in Botony were directly from NCERT, there were some questions that tested students’ conceptual clarity as well.

Students informed that chemistry was easiest among sections. Most of the questions were based on the NCERT figures, facts and their tables. Many statement-based questions were asked in the exam.

This answer key is provided by Aakash BYJU’s. The official answer key will be released by NTA at ntaneet.nic.in soon. After releasing the answer key, the NTA will also give time to students to raise objections, if any on the same. 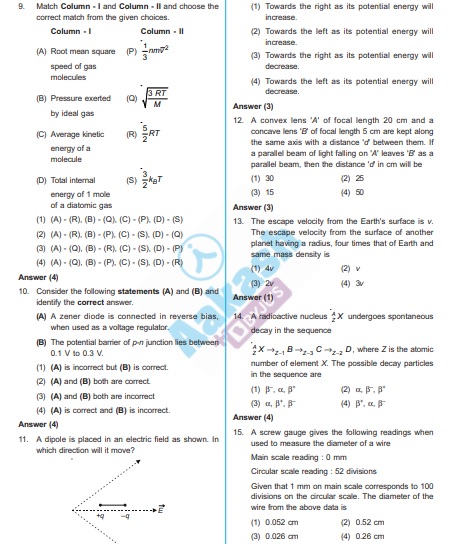 Last year, NEET was held on September 13 amid strict precautions in view of the COVID-19 pandemic. A total of 13.66 lakh candidates had appeared in the exam of whom 7,71,500 qualified. The result was announced a month after the announcement of the result in October. This year too, students can expect the result to be announced by October 12.

Those who get a 50 percentile score or above are considered to have passed the exam and are eligible for counselling. Admissions are given based on counselling rounds including merit and choice. This year, under the All India Quota (AIQ), EWS and OBC category candidates will get reservations.

Despite the pandemic, 95 per cent of the 16.14 lakh candidates who registered for the exam had appeared for the same. The exam was held in over 3,800 centres across the country on Sunday, according to officials.