Election 2022 Live: Assembly Elections 2022 News Today: Out of the total 788 candidates contesting for the upcoming Gujarat Assembly Elections, 167 candidates have criminal cases against them, with 100 of them facing serious charges like murder and rape, a report by the Association for Democratic Reforms (ADR) said

Meanwhile, Kejriwal told textile traders of Surat the AAP will make the city a “garment hub” of the country with an export-oriented integrated textile park and creation of thousands of jobs. Read More

Delhi Chief Minister Arvind Kejriwal on Sunday told textile traders of Surat the Aam Aadmi Party (AAP) will make the city a “garment hub” of the country with an export-oriented integrated textile park and creation of thousands of jobs.

Interacting with the city’s textile traders as part of his campaign for the next month’s Gujarat Assembly polls, the AAP national convener said, if voted to power, the AAP government will bring a special law to protect them against cases of cheating in payment of dues.

Asserting his party would remove “raid raj and fear”, he said, “AAP will make Surat the garment hub of not just Gujarat but the entire country. A new integrated textile park will be created which will be completely export-oriented. You will get tax breaks, incentives and other facilities.” “Textile units will get basic infrastructure and the rates of electricity will be lowered. The AAP government will provide all the facilities for the creation of thousands of jobs and high exports. We will stop the raid raj and harassment at the hands of tax inspectors,” Kejriwal added.

He said traders work 24/7 to earn for their families to pay taxes, give donations and support society, adding AAP will remove fear and give the community respect.

Promising to stop cheating in the payment of dues, which he claimed was a pressing problem, Kejriwal said, “This problem of payment is not of Surat or Gujarat alone but of the country. We will bring a new law for this with the people of Surat that will show a new path to the country.” He also promised traders MSME benefits and easy loans with a raised limit from Rs 25 lakh to Rs 1 crore.

“The Goods and Services Tax rates have caused a lot of trouble. We will raise the issue with the Centre. To implement it, we will create a single-window system to simplify the difficulties and remove corruption,” he said. (PTI)

“The new generation of Gujarat has not seen the serial bomb blasts of Ahmedabad and Surat. I want to caution them of those who are well-wishers of terrorists. Batla house encounter was an act of terrorism but Congress leaders had questioned it,” said PM Modi in Surat, Gujarat

With the 182-member Gujarat Assembly election around the corner, both Aam Aadmi Party (AAP) and Congress are making a range of poll promises to halt the BJP’s 27-year rule in the state. One such promise that has merged as a major poll plank for both parties is the restoration of the Old Pension Scheme (OPS).

The issue also found a place in both Congress and AAP’s manifestos for the recently concluded Assembly polls in Himachal Pradesh as well. READ MORE 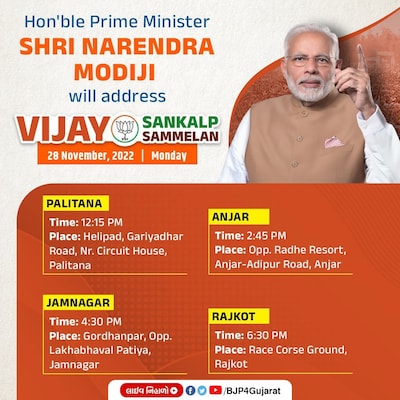 #WATCH | PM Modi takes out a road-show in Surat, Gujarat

From terrorism to free food grain, PM Narendra Modi spoke about a range of topics as he launched a sharp attack on the Bharatiya Janata Party’s Opposition – Congress and Aam Aadmi Party – at his rallies in poll-bound Gujarat on Sunday.

The key campaigner for the BJP, Modi addressed rallies at Netrang, a tribal area of Bharuch district in poll-bound Gujarat, and Kheda. READ MORE

'Congress Attacked Me Instead of Terrorists': PM Modi Strikes Back at 'Vote Bank Politics' in Gujarat Rally

From the Congress’s questioning of the surgical strikes to its “soft” approach on terror, Prime Minister Narendra Modi lashed out at the party at his rally in Kheda in Gujarat, as he spoke about Mumbai’s 26/11 terror attacks. The move is expected to further strengthen the Bharatiya Janata Party’s (BJP) pitch of nationalism in the electoral battleground of Gujarat, days after it promised an anti-radicalisation cell to check terror sleeper cells.

The PM was in Kheda in Gujarat for his 18th rally for the upcoming elections. READ MORE

“During the Batla House encounter, Congress leaders cried in support of terrorists. Even terrorism is vote bank for Congress. It’s not just congress now, several such parties have risen, who believe in politics of shortcut & appeasement,” said PM Modi in Kheda, Gujarat

Terrorism Was At Peak During Congress Rule In The Country: PM Modi

“Gujarat had for a long time been a target of terrorism. People of Gujarat were killed in explosions in Surat & Ahmedabad. Congress was at centre then, we asked them to target terrorism but they targeted me instead. Terrorism was at peak in the country,” said PM Modi in Kheda, Gujarat “PM Modi has been campaigning in every street of Gujarat. The situation arose as BJP did not work for state. No enquiry was conducted in the Morbi incident where 135 people died. If you vote us in, BJP will be forced to introspect,” said Rajasthan CM Ashok Gehlot in Dediapada, Gujarat.

BJP president JP Nadda on Sunday said like “antibodies keep a check on bad cells”, it is the government’s responsibility to maintain vigil on anti-national forces, as he batted for an anti-radicalisation cell announced by his party in its Gujarat assembly polls manifesto.

Releasing the BJP manifesto for the polls, Nadda on Saturday had announced setting up the cell to identify and eliminate potential threats and sleeper cells of terrorist organisations and anti-India forces. READ MORE

If Congress Had Not Worked For 70 Yrs, India Wouldn’t Have Democracy Today: Kharge

Hours before cricketer Ravindra Jadeja travelled through the city’s market in an open SUV as part of a BJP roadshow, his sister Naynaba Jadeja sought votes for the Congress, reminding voters of price rise under the ruling party and its “unfulfilled” employment promises.

While the famous cricketer campaigned for his wife Rivaba Jadeja, his elder sister canvassed for Bipendrasinh Jadeja, highlighting the “sibling rivalry” that has added another layer of interest in the poll after the BJP dropped its sitting MLA Dharmendrasinh Jadeja, locally better known as Hakubha. READ MORE

Delhi Chief Minister Arvind Kejriwal on Sunday made a written assertion that the Aam Aadmi Party (AAP) will form government in Gujarat after the upcoming Assembly polls.

He also urged government employees in Gujarat to back the AAP while promising implementation of the old pension scheme for them by January 31 next year. READ MORE

The latest episode in the Satyendar Jain Tihar CCTV saga series shows a few people providing what looks like house-keeping services in the prison cell of the Delhi minister who is lodged in jail in connection with a money laundering case.

The new CCTV visuals from Satyendar Jain’s cell come amid the minister already being mired in controversy over leaked videos of him getting massage and outside food in jail. READ MORE

Kejriwal to Hold Roadshow at 6 PM

AAP National Convenor and Hon’ble CM of Delhi, Shri @ArvindKejriwal will lead a Roadshow in Jamnagar, Gujarat, today at 6:00 PM.

BJP vs AAP in Battle for Delhi MCD Polls

In Their ‘Karmabhoomi’ Gujarat, How Gujaratis Settled Abroad Are Campaigning for Team Modi

Agroup of 80 Persons of Indian Origin (PIOs) and NRIs are working diligently and silently in poll-bound Gujarat to garner support for the Bharatiya Janata Party. Bearing their own cost of travel and taking out time from their busy schedules, these PIOs have come back to their villages and interact with the people as to why BJP should be voted to power. READ MORE

Voting will be held in Surat in the first phase of the Gujarat Assembly elections on December 1.

On Saturday, BJP President JP Nadda released the party’s poll manifesto in Gandhinagar, where he promised that the party would create 20 Lakh jobs and revamp government schools. The BJP also promises to make Gujarat a trillion-dollar economy.

Out of the total 788 candidates contesting for the upcoming Gujarat Assembly Elections, 167 candidates have criminal cases against them, with 100 of them facing serious charges like murder and rape, a report by the Association for Democratic Reforms (ADR) said on Thursday.

A total 21 per cent of the candidates in fray have criminal cases against them, while 13 per cent are facing serious charges.

Meanwhile, the battle for Manipuri in Uttar Pradesh heats up. The contest in Manipuri, considered to be a Samajwadi Party bastion, is between Dimple Yadav, the daughter-in-law of late Mulayam Singh Yadav, and Bharatiya Janata Party’s Raghunath Shakya. Polling will take place in Mainpuri on December 5 and results will be announced on December 8.

Polling station-wise allocation of electronic voting machines has been done following second level randomisation of these machines ahead of the December 4 Delhi municipal election. The second level randomisation of the electronic voting machines (EVMs) was conducted by the respective district election officers in the presence of general observers appointed by the State Election Commission (SEC), Delhi.

Delhi Chief Minister Arvind Kejriwal has been confidently claiming that his Aam Aadmi Party (AAP) will record a “historic victory” in the upcoming Gujarat Assembly polls and become a “national” political party. The BJP and the AAP have been trading guns over several key issues in the national capital in the battle for MCD polls that will be held on December 4 and the votes will be counted on December 7.

The BJP will return to power in Himachal Pradesh with full majority, the party’s state chief spokesperson Randhir Sharma has claimed and termed the Congress’ allegations of a possible horse-trading “baseless”.

He claimed the Congress leaders are aware that they would face a big defeat and are therefore trying to divert people’s attention by talking about EVMs and horse-trading.

“The BJP will form government with full majority and does not need MLAs from any other party,” he added.

The high-stakes polls to elect 68 members of the Himachal Pradesh Legislative Assembly was held on November 12. The counting of votes is on December 8.