Only 111 Women Made it to Gujarat Assembly Since 1962, Representation Never Crossed 10%: ECI Data

So far, Gujarat has had one woman CM – Anandiben Patel from 2014 to 2016. She took over after then Narendra Modi resigned to be the prime minister. (Image: Reuters/File)

In the 2017 assembly poll, 13 women were elected to the Gujarat legislative assembly and this is only two more from the first assembly election in 1962, when 11 made it to the House

Only 111 women have made it to the Gujarat legislative assembly since the first election in 1962 and their representation has never crossed 10 percent of the House strength, shows data compiled by the Election Commission of India.

According to the data analysed by News18, in the previous assembly poll in 2017, as many as 13 women were elected to the Gujarat assembly. This number was only two more from the first assembly election in 1962, when 11 made it to the House. ALSO READ: Gujarat Election 2022 Voting LIVE: Over 58% Voter Turnout Recorded Till 5 PM; Exit Polls to be Out This Evening

So far, the state has had one woman chief minister – Anandiben Patel from 2014 to 2016. She took over after then chief minister Narendra Modi resigned to be the prime minister.

According to data from the Association for Democratic Reforms (ADR), this time, 138 or just 9 percent of the total candidates in fray are women. Along with the Gujarat Election Watch, the ADR analysed self-sworn affidavits of all 1,621 candidates, who are contesting the two-phase election.

“Out of 1,621 candidates analysed, 476 are from national parties, 219 from state parties, 302 from registered unrecognised parties and 624 candidates are contesting independently,” the report stated. 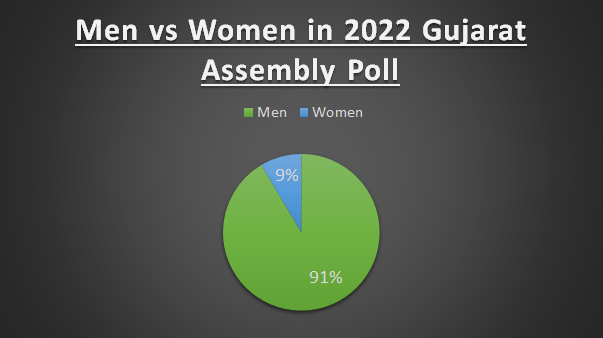 Among major political parties, the BJP has fielded the most number of women at 17 (9 percent) followed by 13 from the Congress (7 percent). Just 4 percent of the candidates from the AAP are female.

The results on December 8 will tell the female representation in the assembly this time.