Home » News » Explainers » China Was a Vaccine Skeptic Even Before Pandemic. It Has Blunted the Nation's Covid Fight | Explained
4-MIN READ

China Was a Vaccine Skeptic Even Before Pandemic. It Has Blunted the Nation's Covid Fight | Explained

Security personnel guard an entrance to a residential area under lockdown due to Covid-19 coronavirus restrictions in Beijing. (AFP)

Explained: As China deals with its zero Covid policy amid fears of reopening, low vaccination is the main issue to look at

Amid a renewed scrutiny on China’s ‘zero Covid’ policy, which became the cause of rare, unified protests across the country against President Xi Jinping, experts have also recognised the flaws within their vaccination drive.

In contrast to other countries, which have accepted that they will have to live with the disease to some extent, China is pursuing a policy known as “dynamic zero," which entails taking dynamic action wherever Covid-19 flares up in order to eradicate it. People gather for a vigil and hold white sheets of paper in protest over COVID-19 restrictions, during a commemoration of the victims of a fire in Urumqi in Beijing, China (Image: Reuters)

The Chinese government claims that this policy saves lives because uncontrolled outbreaks endanger many vulnerable people, such as the elderly. Due to strict lockdowns, China’s death toll has remained low since the outbreak began – the official figure is now just over 5,200.

However, after a fire took 10 lives (which people blamed on the strict lockdowns initiated under the policy) the whole of China came together, demanding an end to the policy, and even seeing calls against the Communist Party of China and Xi Jinping.

Despite accounting for the majority of Covid-19 infections and Covid-related hospitalisations and deaths in China, older adults remain largely unvaccinated; as of May 2022, only 38% of adults aged 60 years or older in Shanghai had received three vaccine doses, with rates even lower in those aged 80 years or older, a BBC report said.

The goal of achieving a Covid-free China has resulted in a focus that may overlook a critical issue, namely low vaccination rates among the elderly, the Lancet says in a report. 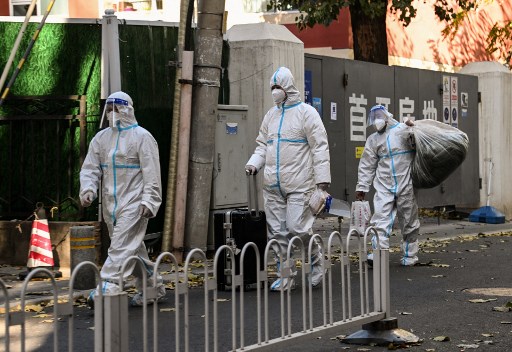 There has been a growing dissatisfaction against China’s strict Covid policy as most of the cities remain locked under the fear of infections. (Photo by Noel CELIS / AFP)

Despite accounting for the majority of Covid-19 infections and Covid-related hospitalisations and deaths in China, older adults remain largely unvaccinated; as of May 2022, only 38% of adults aged 60 years or older in Shanghai had received three vaccine doses, with rates even lower in those aged 80 years or older, the report states.

Early reluctance to get vaccinated was due to initial uncertainty about safety outcomes in older people, which stemmed in part from a lack of clinical trials assessing the outcomes of domestic vaccines in this age group.

In some cases, physicians who advised older patients with chronic conditions against vaccination shared this reluctance.

However, widespread scepticism about vaccines predates the Covid-19 pandemic, which has been fueled by scandals; in July 2018, the Chinese vaccine manufacturing company Changsheng Biotechnology was found to have falsified inspection data for a rabies vaccine and to have manufactured ineffective diphtheria, pertussis, and tetanus vaccines for children and infants, the report states.

Because of the lack of trust in domestic vaccine development, many older people, who are already concerned about safety and often prefer traditional medicine, have refused Covid-19 vaccination. Epidemic prevention workers in protective suits guard the entrance to an office building as outbreaks of COVID-19 continue in Beijing, China (Image: Reuters)

Those older adults who do seek vaccination have difficulty accessing vaccination centres due to limited mobility, particularly those who live in rural areas. Though low vaccine uptake may be misinterpreted as a result of neglect or even ageism, it may instead reflect the deference for older people ingrained in Chinese culture, according to which older people are granted autonomy to make health decisions.

Is the Lack of an MnRA Vaccine Bad?

Even though more than 90 percent of the population in China has already received two doses of the vaccine, the question of whether or not their immunity has been compromised remains an important one. In recent months, the authorities appear to have increased their efforts to encourage people to receive a third shot of the vaccine.

As of the 11th of November, only 65% of the population over the age of 80 had received two shots, while 40% had received three, says a report by South China Morning Post. According to experts, the absence of an mRNA vaccine in China should not be a primary concern; however, the country’s vaccination coverage should be, the report said. Ben Cowling, chair professor of epidemiology at the University of Hong Kong told SCMP that absence of an mRNA vaccine was irrelevant due to the fact that inactivated vaccines are also very good at preventing severe disease.

Even though it was a long way behind BioNTech’s mRNA vaccine in terms of preventing infections, data from Hong Kong showed that Sinovac’s inactivated vaccine was still effective in preventing serious illnesses. This was the case despite the fact that it lagged far behind BioNTech’s vaccine. However, because the rate of vaccine resistance was so high across the board, preventing infections was no longer the primary goal of vaccine development.

“I believe that the cost of maintaining zero-Covid is getting higher and higher each month, while the advantages of zero-Covid are getting smaller and smaller because of the higher vaccine coverage and the milder subvariants of Covid that are now circulating," said Cowling.