Home » News » Explainers » EXPLAINED: James Webb Telescope And The Quest To Look Back To The Beginning Of Time
6-MIN READ

EXPLAINED: James Webb Telescope And The Quest To Look Back To The Beginning Of Time

The James Webb Space Telescope is the largest and most powerful space science telescope ever built, says NASA. It was launched aboard an Ariane 5 rocket on December 25

It’s a telescope that took more than 20 years to make and it will help humanity peer into the beginning of time itself. The James Webb telescope that successfully lifted off on board a rocket on Christmas day 2021 to its cosmic destination a million miles away from Earth is the successor to Nasa’s Hubble telescope, but 100 times more powerful. Built at a cost of USD 10 billion, it promises to open up new vistas and scientists are confident what the telescope shows will have them rubbing their eyes in wonder all over again.

Developed by the US space agency NASA in partnership with the European Space Agency and the Canadian Space Agency, the Webb telescope has been described as “the world’s largest and most complex space science observatory". It is named after James E. Webb, who headed NASA from 1961 to 1968 and is most commonly linked to the Apollo lunar programme.

The Webb telescope weighs about 6,200 kg and has a mission life of up to 10 years. NASA says that scientists, engineers and technicians from 14 countries worked on putting the telescope together with construction beginning in 2004. To create it required engineers “to imagine a telescope unlike any that has ever been built before".

“Technological advances, and even new inventions, were necessary to make the mission feasible," NASA says, adding that some of the inventions “have already improved life here on Earth", like a technique Webb engineers devised that now is used for LASIK eye surgeries.

How Powerful Is The Webb Telescope?

NASA says the Webb telescope is its “revolutionary flagship mission" and that it builds on learnings from the Hubble and Spitzer space telescopes. The “most powerful space science telescope ever built", it will, NASA says, dramatically inspire “how we think about the night sky and our place in the cosmos".

While Hubble provided revealing insights into everything from galaxies, the presence of black holes and the birth of stars, it viewed the universe via visible and ultraviolet light. Webb on the other hand, deepens that focus by looking at infrared wave, which NASA says is “a wavelength important for peering through gas and dust to see distant objects". The Webb telescope will deliver “Hubble’s incredible resolution with even greater sensitivity" by accessing the near-infrared and mid-infrared wavelengths.

The “largest mirror ever flown into space" has a diameter of more than 21 feet and a total area of about 270 sq.ft. An equally important component of the space observatory is its sunshield, which is a diamond-shaped structure about the size of a tennis court. This five-layer umbrella is critical to the telescope’s functioning because, being an infrared observatory, “Webb must be protected from all bright, hot sources in order to see the faint heat signals of distant objects in the universe".

The mirror itself is made of beryllium and coated with a “microscopically thin layer of gold, which optimises them for reflecting infrared light". In total, Webb features four state-of-the-art science instruments with “highly sensitive infrared detectors of unprecedented resolution".

NASA says that the telescope is so sensitive, “it could theoretically detect the heat signature of a bumblebee at the distance of the Moon".

When Will We See The First Visuals From Webb Telescope?

The telescope will take about six months to get into action and start sharing visuals. That’s because getting such a sensitive gadget to start functioning requires many manoeuvres and much careful effort.

To begin with, the telescope has to travel for a month to get to a position about a million miles away from Earth to a “special orbit" where one side of its sunshield would always face the Sun, Earth, and Moon for the purpose of “blocking their heat and light from reaching the telescope’s heat-sensitive optics".

Its position will also allow it to leverage the gravitational pull of the Sun and Earth so that it the need for fuel that will keep it running in space is much reduced. Further, its location will also keep the telescope in continuous touch with scientists on Earth.

One complex process that the telescope has to accomplish involves the unfolding of the sunshield and the mirror. Given their size there was no rocket that could have carried these instruments in their full deployment configuration and both have had to be folded up inside the payload of the Ariane 5 rocket that launched the telescope. The primary mirror sits folded up into 18 hexagonal pieces arranged on hinges so that it can unfold in space. The sunshield, too, “will expand, tension, and separate into its five distinct layers" once the telescope is in position.

To finally start sending images, the telescope has to cool down to its “cryogenic operating temperatures", which is about 40 kelvins, or less than -380 degrees Fahrenheit. Before that the team controlling the telescope has to align all the mirrors and calibrate the scientific instruments. NASA says that “to act as a single optic, each of the 18 segments must be aligned to within a fraction of a wavelength of near-infrared light… about 1/10,000th the thickness of a human hair!"

So, What Can The Webb Telescope Show?

According to NASA Administrator Bill Nelson, “the promise of Webb is not what we know we will discover; it’s what we don’t yet understand or can’t yet fathom about our universe". NASA says that the telescope can observe “all of the cosmos, from planets to stars to nebulae to galaxies and beyond" and bring scientists information that “will fundamentally alter our understanding of the universe".

The prime focus will be to see to the oldest stars in the universe to understand how the cosmos was formed and expanded after the Big Bang. That’s because in throwing its glance billions of kilometres into space, Webb telescope will be looking back into time itself. You know how this works: since the light from all the stars reaches us after a delay — a ray of the Sun, our nearest star, takes eight minutes to reach Earth — what we finally observe is how that star was when the light ray left it. That is, if the Sun were to go out, people on Earth would realise that only after eight minutes. Now, when the Webb telescope looks at a star whose light takes billions of years to reach it, it would in effect be looking at how it was back in time.

The universe is estimated to be about 13.8 billion years old and the Webb telescope, working like “a powerful time machine" will direct its gaze to over 13.5 billion years ago “to see the first stars and galaxies forming out of the darkness of the early universe". 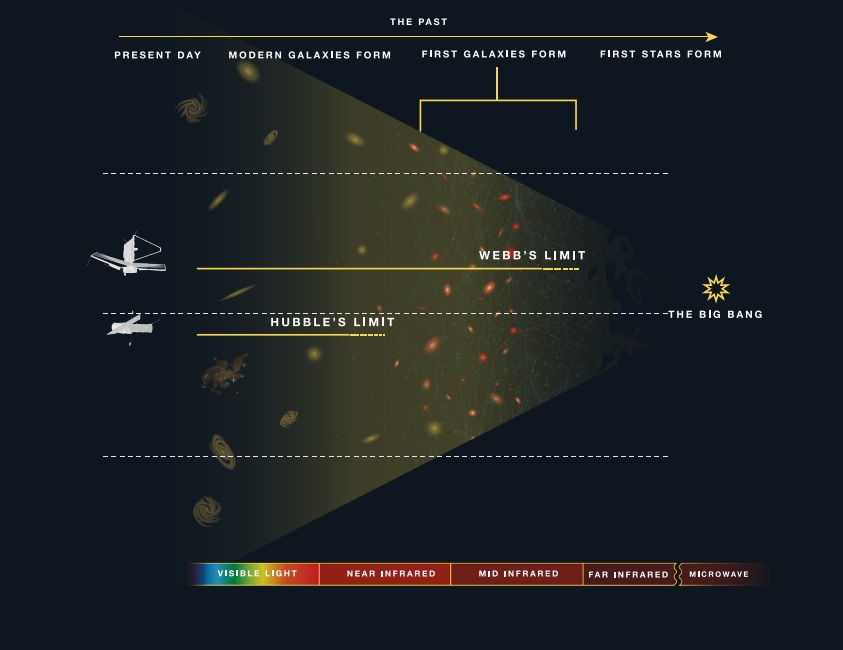 How far back the Webb telescope can see. (Source: NASA)

“Webb’s revolutionary technology will allow scientists to explore every phase of cosmic history — from within our solar system to the most distant observable galaxies in the early universe, and everything in between," NASA says. The telescope will thus “help humankind understand the origins of the universe, as well as our place in it".

The Space Telescope Science Institute (STScI), which oversees the science operations behind the telescope, adds that it is “accessible to the worldwide scientific community", and will offer researchers, “the opportunity to observe galaxy evolution, the formation of stars and planets, exoplanetary systems, and our own solar system, in ways never before possible".