Home » News » Explainers » EXPLAINED: Why Marcell Jacobs's 100m Win Made History, And How Few Have Gone Where He Has Taken Italy
3-MIN READ

EXPLAINED: Why Marcell Jacobs's 100m Win Made History, And How Few Have Gone Where He Has Taken Italy

Not really the fireworks of the Usain Bolt era, but the 100m sprint at the Tokyo Olympics did offer lots to talk about. Here's all you need to know

The 100m sprint is arguably the most hotly anticipated and eagerly followed event at any Olympics. The reason, experts say, is simple: The race can potentially give us the fastest woman and man on the planet, although neither of the records that stand now for the fastest 100m by a man or woman were set at an Olympic Games. However, that doesn’t take away from the sheer spectacle provided by the event, winners of which occupy the rarefied reaches of Olympic glory, not least because there have been only a handful of countries that have clinched the title while a very small group of men and women own the timings that have wowed the world.

How Many Countries Have Won The 100m Sprint?

The 100m sprint is termed a blue riband, or blue ribbon, event. The label indicates that the event is a class apart. Much of that billing may be attributed to the fact that not many countries or people have managed to win this title, across both the men’s and women’s races.

The 100m sprint has been an Olympic sport for men right since the first modern Games in 1896, although the women’s event began only in 1928. Since that time, no more than nine countries have bagged the men’s gold while the women’s topper has come from no more than 10 countries.

When Lamont Marcell Jacobs crossed the finishing line with a time of 9.80 seconds on August 1, he became the first European since Linford Christie of Great Britain in 1992 to win the 100m gold. He thus ended close to three decades of dominance of the race by athletes from the Americas. Since 1996 and till the Tokyo Games, athletes from just three countries — Canada, US, Jamaica — had won the men’s 100m. Incidentally, his win also marked the first time since 2004 that the 100m had a new Olympic champion since the event was won by Jamaican legend Usain Bolt between 2008 and 2016.

How Many Athletes Have Bagged The 100m Gold?

While the Tokyo Games is officially the 32nd Olympic meet, this is the 29th time that the Olympiad has actually been held as the Games have been cancelled on three occasions in total — either for World War I or II. In the 29 times that they have run the race, only 26 different men have won the 100m title. The record for most wins is, of course, held by Bolt with his three 100m Olympic golds. The only other man with more than one 100m Olympic gold is Carl Lewis of the US, whose tally is one shy of Bolt’s.

There have been a total of 22 races of the 100m run by women since 1928 and the title has been won by 17 women altogether. There have been four multiple medallists among women, with Wyomia Tyus and Gail Devers — both of the US — and Jamaicans Shelley-Ann Fraser-Pryce and Elaine Thompson Herah having each won the title twice.

What Has Been The Trajectory Of 100m Timings?

At Athens in 1896, the first 100m modern Olympic gold was won with a time of 12 seconds. It would take almost seven decades after that for the 100m timing to dip below gthe 10-second mark, when another American athlete, Jim Hines, would breach the barrier at Mexico 1968.

The women’s record fell from 12.2 seconds in 1928 to 10.5 in 1988. Since the 1984 Olympics in Los Angeles, the gold medal times have remained below ten seconds for men, and eleven seconds for women. But the current world records for both the men’s and women’s 100m came outside the Olympics. Bolt set his 9.58 second time at the IAAF World Championships in 2009 while the late US athlete Florence Griffith-Joyner still holds the record for the women’s 100m at 10.49 seconds that she ran at a qualifier for the 1988 Seoul Olympics. 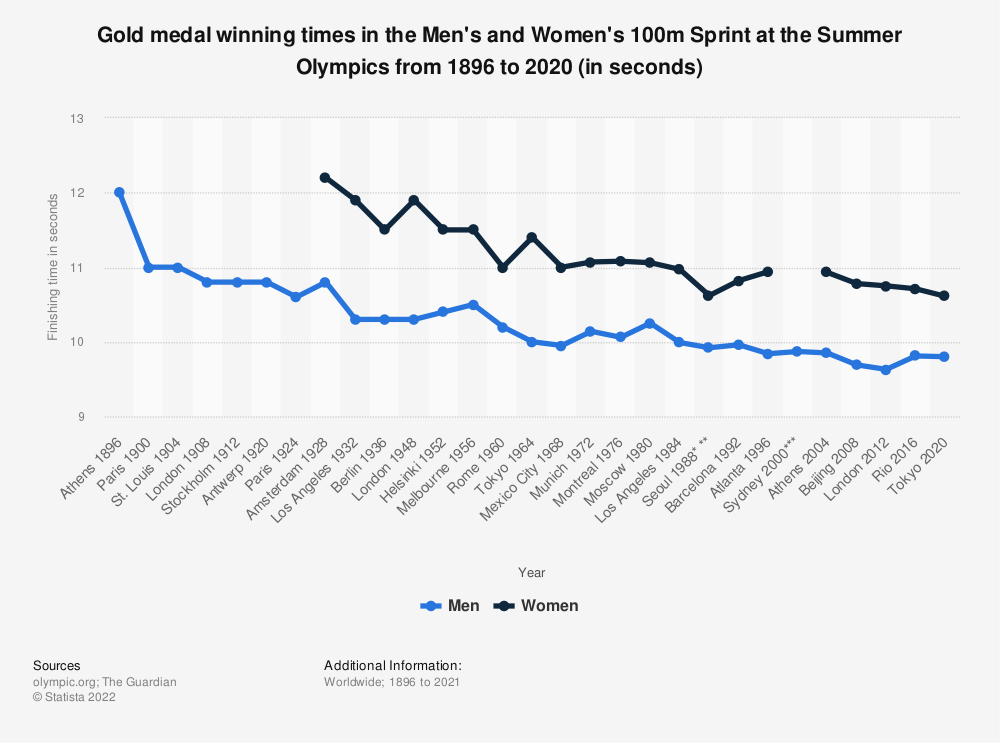 The fastest 100m time at the Olympics is Bolt’s 9.63 seconds at 2012 London. The Jamaican also holds the second-fastest time: 9.69 seconds at the Beijing Games in 2008. In fact, the best 10 times for the men’s 100m at the Olympics, including heats, features Bolt’s name four times on the list while fellow countryman Yohan Blake owns two best times. In fact, six athletes account for the 10 best times in the men’s 100m at the Summer Games.

On the women’s side, Elaine Thompson-Herah in Tokyo this year broke the Olympic record of 10.62 seconds — set by Griffith-Joyner at Seoul 1988 — with a time of 10.61 seconds. Among the women, too, six athletes have the 10 best times for the Olymic 100m, including in the heats.