From Hijab Row to '2047 Plan', PFI Hogged Headlines for Wrong Reasons. All About the Outfit Raided by NIA, ED

A security personnel keeps vigil outside the Popular Front of India (PFI) party office in Navi Mumbai on Thursday. A multi-agency operation was spearheaded by the National Investigation Agency (NIA) on the PFI in 11 states for allegedly supporting terror activities in the country. (PTI)

The proscribed outfit on Thursday faced a multi-agency, pan-India crackdown in which over 100 of its leaders were arrested in the biggest crackdown so far

Thursday was not the first instance of the Popular Front of India (PFI) hogging national headlines. The proscribed outfit, which was founded in Kerala in 2006, has been in the news for all the wrong reasons the past few months and on Thursday faced a multi-agency, pan-India crackdown in which over 100 of its leaders were arrested. The charges against the PFI cadre range from those under UAPA to terror funding and inciting tensions between communities — grave allegations which could break the spine of the outfit headquartered in Delhi.

With all eyes on PFI, News18 brings to you a lowdown on the outfit, controversies, run-ins with law, and future course:

Three Muslim organisations — the National Democratic Front in Kerala, the Karnataka Forum for Dignity, and the Manitha Neethi Pasarai in Tamil Nadu — came together to form the Popular Front of India in 2006. The decision was formally announced at a rally in Bengaluru during the “Empower India Conference” on February 16, 2007.

The PFI, which claims to strive for a neo-social movement ostensibly for the empowerment of marginalised sections of India, emerged in the aftermath of the ban on the Students Islamic Movement of India (SIMI). Though it has never contested elections, several mainstream parties accuse one another of being on good terms with the outfit to win the support of Muslims at the time of elections.

The footprint of PFI expanded further in 2009 when a political outfit named Social Democratic Party of India (SDPI) evolved out of it with the aim of taking up the political issues of Muslims, Dalits, and other marginalised communities.

The SDPI’s stated goal is “advancement and uniform development of all the citizenry including Muslims, Dalits, Backward Classes and Adivasis”, and to “share power fairly among all the citizens”.

In its home state, PFI has been repeatedly accused of murder, rioting, intimidation, and having links with terrorist organisations.

Detailing the surge of the outfit and its illegal activities, the Kerala government headed by Oommen Chandy of the Congress in 2012 had informed the High Court that PFI was “nothing but a resurrection of the banned outfit Students Islamic Movement of India (SIMI) in another form”.

Two years later, the Kerala government told the High Court in another affidavit that the PFI had a clandestine agenda of “Islamisation of society by promoting conversion, communalisation of issues with a view to the benefit of Islam, recruitment, and maintenance of a branded committed indoctrinated Muslim youth for undertaking actions including selective elimination of persons, who in their perception are enemies of Islam”. The organisation has often been in the news for murders of BJP and RSS leaders among others.

In April this year, the Kerala BJP announced the launch of a campaign against “growing instances” of “religious terrorism” in the state, with the PFI’s alleged involvement. “In the last six years, 24 BJP-RSS workers have been killed in Kerala, seven of them by the Popular Front of India,” BJP state president K Surendran said on April 18.

Apart from an ever-growing list of political murders, PFI hogged the news in 2015 when 13 of its workers were awarded life-term for chopping the palm of college professor TJ Joseph who prepared a question paper alleged to be blasphemous.

Cut to 2018, six PFI activists were held in connection with the murder of an ABVP leader in Kannur and nine were arrested for allegedly killing SFI leader Abhimanyu in Maharajas College in Ernakulam in 2019.

In the year 2018, when the Hadiya Jehan case came up, Hadiya alias Akhila’s father K Asokan had alleged that her husband Shefin Jehan was an active member of the PFI. Police later found that Akihla was converted in Sathya Sarani, a religious school being controlled by the PFI in Malappuram district, Hindustan Times reported. Its name had also cropped up in alleged cases of “love jihad”.

The outfit is also suspected to have instigated violence in Assam’s Darrang district during a police eviction drive against encroachers in September 2021.

According to inputs by several agencies, PFI’s role in the Citizenship Amendment Act (CAA) protests and North-East Delhi riots is also under the scanner. On February 23, 2020, riots broke out in North-East Delhi in the wake of clashes between opposers and supporters of the CAA. The violence took a communal turn and led to the death of over 53 people and extensive loss of property.

PFI also found mention in the Hathras incident of 2020 after the gang rape and murder of a Dalit girl. The Uttar Pradesh Special Task Force (UPSTF) filed a chargesheet against eight members of the outfit, accusing them of receiving funds from abroad to foment riots in Hathras.

Karnataka’s Hijab row also had the PFI imprint, the Supreme Court was told, with the state government contending that students who challenged the hijab ban in government institutions were influenced by the radical outfit.

SG Tushar Mehta said that the petitioners, who got admitted to the PU college in 2021, complied with the uniform rules initially.

“In 2022, a movement started on social media by an organisation called Popular Front of India. The social media movement was designed to create agitation based on religious feelings of the people,” SG Tushar Mehta told the bench.

“This is not a spontaneous act of a few individual children that we want to wear hijab. They were part of a planned conspiracy. These children are acting as advised by PFI,” he added.

According to the Bihar Police, which unearthed a terror module involving the outfit’s operatives in Phulwari Sharif, a suburb of Patna, PFI has vowed to make India an Islamic country by the year 2047. 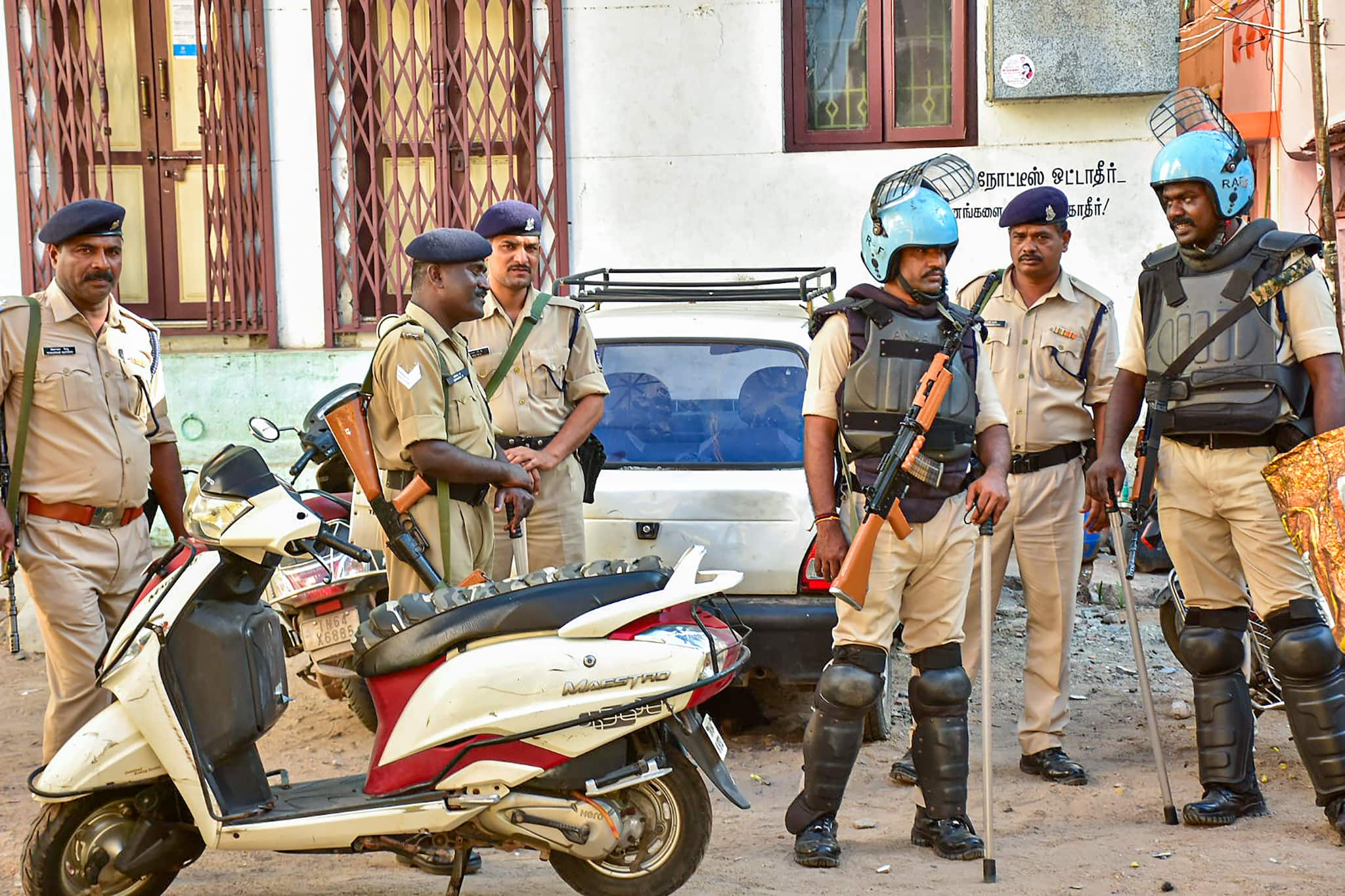 Assistant superintendent of police (ASP) Manish Kumar, who led the operation in Phulwari Sharif, quoted a “secret document” which said the PFI wants to “subjugate the coward Hindu community and bring the lost glory of Islamic rule back to India”.

The PFI document says, “We dream of 2047, where political power has returned to the Muslim community from whom it was unjustly taken away by the British Raj.”

Its states that Muslims were always in minority but they ruled India for centuries and they don’t need to be in the majority.

PFI cadres and Muslim youths should work for the “deen” as Allah had ordained that rule of Islam be established in the world, it says.

News18 has accessed the complete document of “India-2047 towards the rule of Islam in India”, but is not sharing sensitive details because of national security concerns.

CNN-News18 had earlier reported how the outfit has employed a new technique for recruitment, which subverts the Aadhaar system of checks and balances.

Agencies suspect that PFI has joined hands with traffickers to get Aadhaar documents for Rohingyas and Bangladeshis and then facilitate their translocation to states such as Maharashtra and Karnataka as cheap labour. “The modus operandi seems to be to include them in the family tree of an Indian Muslim. The head of the family, in lieu of money, often comes up with the plea that as a child, the suspect was sent to live with a relative and now that he has returned to help in the farm or other work, his Aadhaar card needs to be made,” an officer aware of the developments told CNN-News18 .

Bihar Police officials suspect that stricter vigil on the Bengal-Assam border has led to the new modus operandi of entering India via the open India-Nepal border. Illegal colonies have come up on the No-Man’s Land in this region and uninhabited land parcels around its highways are also being used to provide temporary shelter to illegal immigrants, officials said.

The outfit on Thursday too hit out at the NIA for the coordinated raids, calling its claims “baseless and sensationalism” that are “solely aimed at creating an atmosphere of terror”.

“Popular Front of India’s National Executive Council (NEC) has condemned the national wide raids by the NIA & ED and the unjust arrests and the harassments of its National and state leaders across India and the witch-hunting against the members, and supporters of the organization,” it said in a statement.

The outfit added: “…It will stand firm on its will for recovering the democratic system and spirit of the constitution of our beloved country.”

Top sources have told CNN-News18 that the government is planning to ban the proscribed outfit in what is being seen as the final blow after its top leadership was arrested in two UAPA cases and many more face allegations of mobilising funds in the name of religious activities and creating tensions between communities.

“PFI ban cannot be ruled out. We are analysing the situation,” the sources told CNN-News18.

All those arrested in NIA cases will be brought to Delhi on Thursday evening after their transit remand formalities.

Sources said agencies are keen to keep them in separate jails “to avoid sympathy for them”. “They are UAPA accused and will be penalised for anti-national crimes,” they said.