The couple, who were on a rare visit to Britain when the queen died on Thursday, reunited with Harry's brother William and wife Kate at Windsor Castle Saturday (Image: Twitter/Reuters)

After much media highlight in the last two years over the spat between the ‘royal’ couples of the British monarchy - Prince William and Kate, and Prince Harry and Meghan Markle - the Queen’s death finally brought them together. Now, it is being speculated whether Queen Elizabeth II’s death could help start a reconciliation between Prince Harry and wife Meghan and the rest of the royal family, after a reported rift and their relocation to the United States.

The couple, who were on a rare visit to Britain when the queen died on Thursday, reunited with Harry’s brother William and wife Kate at Windsor Castle Saturday. It was their first joint public appearance since they moved stateside in early 2020. All dressed in mourning black, together they looked at the growing banks of flowers left by the public before greeting well-wishers as separate pairs, giving little away about the state of their relations. But the decision by the quartet — once dubbed “the fab four" in closer times — to step out together in front of the cameras at all appeared a sign of progress in repairing badly fractured ties.

But what is the history behind the rift between the ‘fab four’ and how could it become better? News18 explains

‘From Same Path to Different Ones’

Things used to be so different.

After the princes’ mother Diana died in a Paris car crash in 1997, they touched the world by walking behind her coffin at her funeral. William was 15 while Harry was just 12. (L-R) Earl Spencer, Prince William, Prince Harry and Prince Charles look at the coffin of Diana, Princess of Wales, after it was put into a hearse, September 6, 1997 (Reuters/Archive)

They appeared to share a close bond as adults, uninterrupted by William marrying long-term girlfriend Kate Middleton in 2011 and starting a family. Britain’s Prince William and his bride Catherine, Duchess of Cambridge (C), pose for an official photograph, with their families, on the day of their wedding. (Reuters/Archive)

But relations soured following former British Army captain Harry’s 2018 marriage to Meghan — a mixed-race American television actress — at Windsor in 2018. He said in a 2019 interview that he and his brother were “on different paths". A year later, Harry and Meghan sensationally announced their move to the US.

The couple’s subsequent explosive Oprah Winfrey interview in March 2021 saw Meghan publicly claim Kate had made her cry. The most damaging claim, however, was that an unnamed royal had speculated about the skin colour of mixed-race Meghan’s future child.

William reacted later by telling a journalist that the royals were “very much not" a racist family.

Relations between the brothers were visibly frosty when they reunited last year to unveil a statue to their mother. 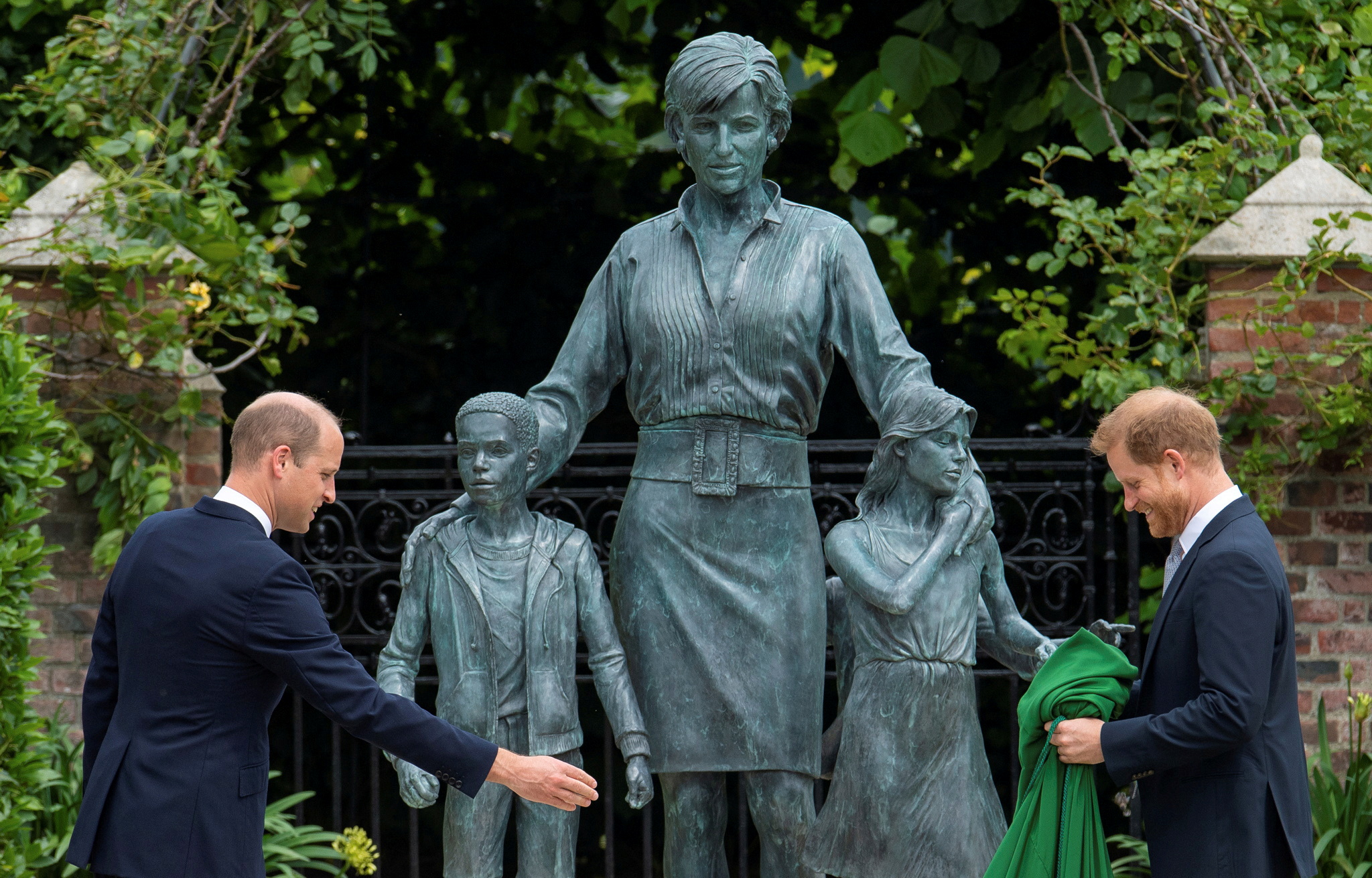 Britain’s Prince William, The Duke of Cambridge, and Prince Harry react during the unveiling of a statue they commissioned of their mother Diana, Princess of Wales. (Reuters/Archive)

They did not meet during the queen’s Platinum Jubilee celebrations in June. More recently, Meghan told The Cut magazine in a lengthy interview that she now felt “free" to tell her own story, which some saw as a veiled threat to the monarchy.

However, since the queen’s death there have been tentative signs of a possible softening in the estrangement. Despite Harry claiming to Winfrey that his brother and father were “trapped" in the monarchy, Charles appeared open to reconciling with his self-exiled son in his first speech as Britain’s new king, notably expressing “love" for him and Meghan.

“He’s offering an olive branch, but he’s offering (it) with great great care because he knows they’re unpredictable," said Fitzwilliams.

The Duke and Duchess of Sussex are popular with young people, but could be taking a big risk openly criticising the monarchy, he added, especially at a time of national mourning and in its aftermath. “There’s no doubt that the Sussexes will draw a lot of attention right now," noted Fitzwilliams, with British public opinion already firmly on the rest of the family’s side.

But Harry’s Memoir to Decide the Path Ahead

UK royal reporters also said heir-to-the-throne William proposed the “olive branch" to his younger brother, who has been increasingly critical of the family since leaving frontline royal duties. Just two days earlier it was a different story, with a tearful looking Harry, 37, arriving alone in a vehicle to the Balmoral estate where the queen had earlier died.

William and several other close family members — but not Kate — had earlier turned up together in a single car, but also arrived too late to see the queen before she passed away. Royal expert Richard Fitzwilliams said Thursday’s separate arrivals showed the brothers had become “estranged".

He argued that Harry and Meghan were seen to have “done the royal family a lot of damage in recent months" with their broadsides against the monarchy. “For the future, the ball’s in their court and it depends how they want to play," Fitzwilliams added.

Saturday’s joint appearance with William and Kate, who this week became the prince and princess of Wales following Charles’ ascension to the throne, may herald a new chapter for family relations. But with Harry anticipated to release his likely controversial memoirs by the end of the year, things could also easily regress.

“Obviously they will attend the funeral. More than that, it’s impossible to say," said Fitzwilliams. “If in Harry’s memoir he has stopped being critical, that’s different."

With inputs from AFP