Home » News » Explainers » Why All Eyes Are on DRDO's 2-DG, The New Drug Launched Commercially Today Against Covid-19
3-MIN READ

Why All Eyes Are on DRDO's 2-DG, The New Drug Launched Commercially Today Against Covid-19

As the country is battling the second wave of the Covid-19 pandemic, Dr Reddy’s announced the commercial launch Of 2-DG drug, found to help speed up recovery and reduce oxygen dependence. Amid the despair and confusion comes 2-DG, the indigenously developed Covid-19 drug launched in collaboration with a defence lab. Will it prove to be a silver lining or is it going to join the list of medications whose efficacy remains debatable in curing the infection?

2-DG, short for 2-deoxy-D-Glucose, was developed by the Institute of Nuclear Medicine and Allied Sciences (INMAS) — a lab that is part of the Defence Research and Development Organisation (DRDO) — in collaboration with Dr. Reddy’s Laboratories, Hyderabad.

The drug is a result of laboratory experiments launched in April 2020 that found this molecule was effective against SARS-CoV-2 virus and inhibited viral growth. 2-DG comes in powder form in a sachet and is to be taken orally after dissolving it in water.

The Drugs Controller General of India (DCGI), which is the national drug regulator, approved its emergency use on May 1, the Ministry of Defence said earlier this month. Defence Minister Rajnath Singh and Health Minister Dr Harsh Vardhan released the first batch of the drug on May 17.

How Does It Work?

According to the defence ministry, clinical trials have shown that the drug helps in faster recovery of hospitalised patients and reduces supplemental oxygen dependence. 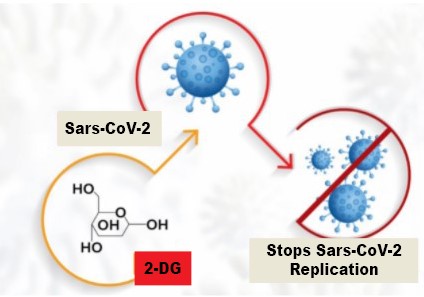 It works by accumulating in the virus-infected cells of patients and prevents virus growth by stopping viral synthesis and energy production. The ministry said that “its selective accumulation in virally infected cells makes this drug unique". It added that a higher proportion of patients treated with 2-DG were found to display “RT-PCR negative conversion" and that the “drug will be of immense benefit" to Covid-19 patients.

Who Can it Be Given To? Where Is It Available?

The clearance received by 2-DG allows its use in moderate to severe cases. It is to be used as an adjunct therapy, which means it can supplement the primary line of treatment for such patients. The latest clinical management guideline for Covid-19 released by the health ministry does not mention the 2-DG drug, which is yet to hit the markets.

Dr Reddy’s Laboratories said on May 19 that commercial launch of 2-DG and its supply to government and private hospitals will begin some time in mid-June.

It added that the price per sachet will be fixed with a view to making it affordable for as many patients as possible and warned against attempts to pass off fake and illegal products as the 2-DG drug.

The defence ministry had said that 2-DG is derived from a generic molecule that is an analogue of glucose and, hence, “can be easily produced and made available in plenty in the country".

What Did Trials Say About 2-DG’s Efficacy?

Phase-II trials conducted on 110 patients between May and October, 2020 showed that the drug was safe and led to significant improvement in the recovery of Covid-19 patients.

The defence ministry said that patients administered 2-DG “showed faster symptomatic cure than Standard of Care (SoC) on various endpoints" and that there was a median difference of 2.5 days in achieving normalisation of specific parameters as compared with the standard care protocol.

The Phase-III clinical trial, which was held for 220 patients between December last year and March 2021, reported that a significantly higher proportion of patients (42% vs 31%) improved and could be taken off supplemental oxygen by Day 3 compared with those who received standard care. A similar trend was seen in 65+ year patients.

However, concern has been voiced in some quarters about what is being described as a lack of sufficient data to satisfactorily evaluate the efficacy of the drug, whose development as a Covid medication in India, The Indian Express said, followed a paper written last year by a team comprised mainly of members of Patanjali Research Institute.

While 2-DG has been explored in cancer therapy, its use for Covid-19 treatment needs to be studied further, The Indian Express cited experts as saying. Doctors have also pointed to the small sample sizes of 2-DG’s clinical trials while suggesting that more data should be awaited before the drug can be confidently said to check the course of Covid-19 infection in patients.