Why are Chinese Protesters Holding Up Blank White Papers Against Xi Jinping? Explained

Explained: A number of unique protest symbols, even with reference to the Tiananmen square demonstrations are propping up in China against 'Zero Covid.' Their significance:

Angry crowds took to the streets in Shanghai early on Sunday, and videos on social media showed protests in other cities across China, as public opposition to the government’s hardline zero-Covid policy mounts.

ALSO READ | From the ‘Great Firewall’ to Detentions, How China Crushes Its Anti-govt Protests | Explained

A deadly fire on Thursday in Urumqi, the capital of northwest China’s Xinjiang region, has spurred an outpouring of anger as many social media users blamed lengthy Covid lockdowns for hampering rescue efforts.

Some attendees at a gathering in Shanghai were seen lighting candles and laying flowers for the victims. Others could be heard yelling slogans like “Xi Jinping, step down" and “Communist Party, step down." Some people also carried blank white banners, the BBC said in a report.

According to reports, the blank white banners or flags are being frequently used in the protest. But why? News18 explains:

New protest method in China: holding a piece of whitepaper with nothing on it. https://t.co/NLrPLFIrVE— Wenhao (@ThisIsWenhao) November 26, 2022

In the wake of Covid protests, this post is spreading on Chinese social media (where censors are in overdrive). Text reads “I love you, China. I love you, young people.” pic.twitter.com/qQR50MBZjs— Josh Chin (@joshchin) November 27, 2022

The move seems to be borrowed from the Hong Kong protests against Beijing’s stringent National Security Laws. In China too, any direct criticism of the government or the president can result in severe punishment.

The anti-government protest movement that escalated in June 2020 had spawned an explosion of public art and graffiti, some of it calling for independence for the Chinese-ruled territory or urging residents to “liberate” the financial hub.

But the city’s government had said the popular slogan “Liberate Hong Kong, revolution of our times," daubed on walls and banners, amounted to a call for separatism or subversion - offences punishable with long jail terms under the new law. In response, one 50-year-old campaigner held up a blank sheet of paper at a small lunch-time protest.

The point, he had said was to highlight what he saw as censorship. And everyone already knew the slogans by heart, he added, so there was no longer any need to write them down.

“These slogans will always be in my heart and those words will always stay on white paper, which will never disappear,” the man, who wore a mask and only gave his surname, Leung told Reuters. Elsewhere in the city, walls that were once colourful canvases of political murals and graffiti tags were covered over in white paint or blank post-it notes.

Other protesters had used art or designs to disguise the “Liberate Hong Kong” slogans, changing characters, blurring lettering or burying the words in illustrations.

Some attendees at a gathering in Shanghai were seen lighting candles and laying flowers for the victims. Others could be heard yelling slogans like “Xi Jinping, step down" and “Communist Party, step down."

The Bridge Man & the Tank Man

Hundreds of people taking to the streets to demand that President Xi step down was unthinkable not long ago. However, following a recent dramatic protest on a Beijing bridge that stunned many, a bar appears to have been set for more open and sharper dissent, the BC stated in a report.

A man carrying a cardboard box and car tyres had climbed a busy overpass in Beijing’s Haidian university district in October on a cloudy afternoon. He easily passed for a construction worker, dressed in an orange worksuit and a yellow hard hat. 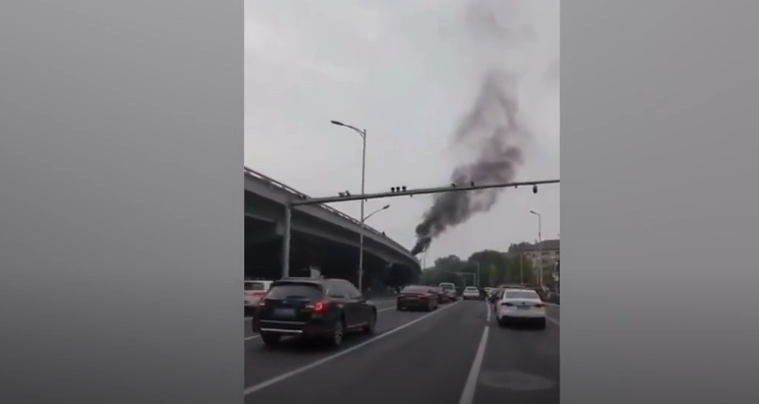 But then he unfurled two massive white banners covered in red paint slogans. He set fire to the tyres. As plumes of black smoke swirled around him, he grabbed a loudspeaker and chanted: “Go on strike at school and work, remove dictator and national traitor Xi Jinping! We want to eat, we want freedom, we want to vote!"

The man pulled off one of the most significant acts of Chinese protest seen under Xi’s rule in an instant, marring the triumphant start of the Chinese leader’s expected third term in power, BBC reported.

It has sparked one of the most widespread social media storms - and censorship crackdowns - seen in recent years, leaving an enduring legacy in Chinese dissent.

It’s also piqued the interest of China’s censors, who have relentlessly scrubbed photos and footage and limited search results for a wide range of words, including general terms like “Beijing" and “bridge."

Who was the Tank Man?

Tank Man (also known as the Unknown Protester or Unknown Rebel) was the nickname given to an unidentified Chinese man who stood in front of a column of Type 59 tanks leaving Tiananmen Square in Beijing on June 5, 1989, the day after the Chinese government’s violent crackdown on the Tiananmen protests.

As the lead tank maneuvered to pass by the man, he repeatedly shifted his position in order to obstruct the tank’s attempted path around him. The incident was filmed and shared to a worldwide audience. Internationally, it is considered one of the most iconic images of all time. Inside China, the image and the accompanying events are subject to censorship. A Beijing citizen stands in front of tanks on the Avenue of Eternal Peace in this June 5, 1989 file photo during the crushing of the Tiananmen Square uprising. (Reuters)

According to Britannica, “Tank Man became an enduring symbol of defiance in the face of violent authoritarianism." “The image of him blocking the tanks was on the front pages of newspapers across the world. In China a television program branded Tank Man a “lone scoundrel” and used images of his protest to demonstrate that soldiers of the People’s Liberation Army had “exercised the highest degree of restraint” when confronting unarmed civilians.

It remains to be seen whether the ‘Bridge Man’ will come to bear as great historical significance as the ‘Tank Man.’ But it is definitely reigniting the bold imagery associated with the rare Chinese protests.

With inputs from Reuters, AFP