ATKMB Score
90' | David Williams has finally broken the deadlock! He was left unmarked there and the Australian made no mistake from the close range.

88' | Tiri is the latest ATKMB player to be booked

87' | A ball is played in from the left for Jakub Sylvestr but ATKMB manages todeal with it.

82' | ATKMB won a free-kick in the other half of the pitch and they tried to play out a training ground routine, however, the ball fell for CFC and they dashed towards ATKMB goal. Thoi almost played a perfect through ball inside the box but ATKMB recovered and nullified the danger.

74' | Edu Garcia almost opened the scoring there for ATK Mohun Bagan. ATKMB get a free-kick a few yards outside the box. Edu steps up and curls in a delightful strike. However, Vishal Kaith leaps towards his left to make a brilliant save. That was almost top bin from the Spaniard.

70' | David Williams is in the thick of the action right away. Playing from the right-hand side he drilled in a cross for KRishna who is in the middle but the ball is just a bit behind.

62' | Memo floats in a ball from the corner quadrant, it misses everyone and hits Eli Sabia's thigh and goes behind for a goalkick.

59' | Chhangte gets the ball on the left side of the box. He looks for support and finds Esmael Goncalves. The CFC forward though is a bit quick to make his run and is flagged offside.

55' | Subhasish Bose OUT; Sumit Rathi IN

51' | Reagan Singh floats in a ball into the ATKMB box after Sk. Sahil conceded a free-kick on the right flank of the pitch. The ball was aimed at the far post. but Sandesh Jhingan was there for ATKMB to head it away.

48' | Some good footwork there as Javier makes his way into the CFC box from the left. However, his last touch to beat the defenders is too heavy as another CFC player clears it away.

47' | Chennai almost with the equaliser there but again, as same as the first half they are unable to breach the last line of defence.

46' | Action Resumes!  Both teams would like to go one step forward and break the deadlock in the second 45-minutes. The first half everything except the goals. It's all square at the Fotrda Stadium at the break as both ATKMB and CFC fail to breach each other's backline.

45+2' | Memo fires in from distance and his strike takes a deflection and heads goalwards but Arindam is aware enough to parry it away.

45' | Isma gets a loose ball and he turns and shoots but it is wayward.

41' |  Chhangte gets a second ball inside ATKMB box and whips in a cross but Jhingan and Tiri is there for ATKMB to clear it away.

38' | Manvir Singh floats in a ball into the box from the right flank but there is no ATKMB player to attack the ball. Eli Sabia clears the ball out of the danger area with no propblem.

34' | Chhangte shows some silky footwork as he tries to go past Sandesh Jhingan, he manages to fire in a cross but the ball had crossed the byline by then.

31' | ATK Mohun Bagan just can't breach the Chennaiyin backline. They have managed to create some good chances so far in the match but they are lacking that killer pass inside the box. They have even tried their luck from distance but so far they have been unsuccessful.

25' | Isma gets the ball in the centre of the park and then looks to play a through ball for Chhangte. However, his pass is slightly overhit.

21' | Tiri plays a high ball at the edge of the box, Edu Garcia jumps and lays it on the path of Javier Hernandez. He connects with a volley first time but Vishal Kaith dives to his left to make a save. 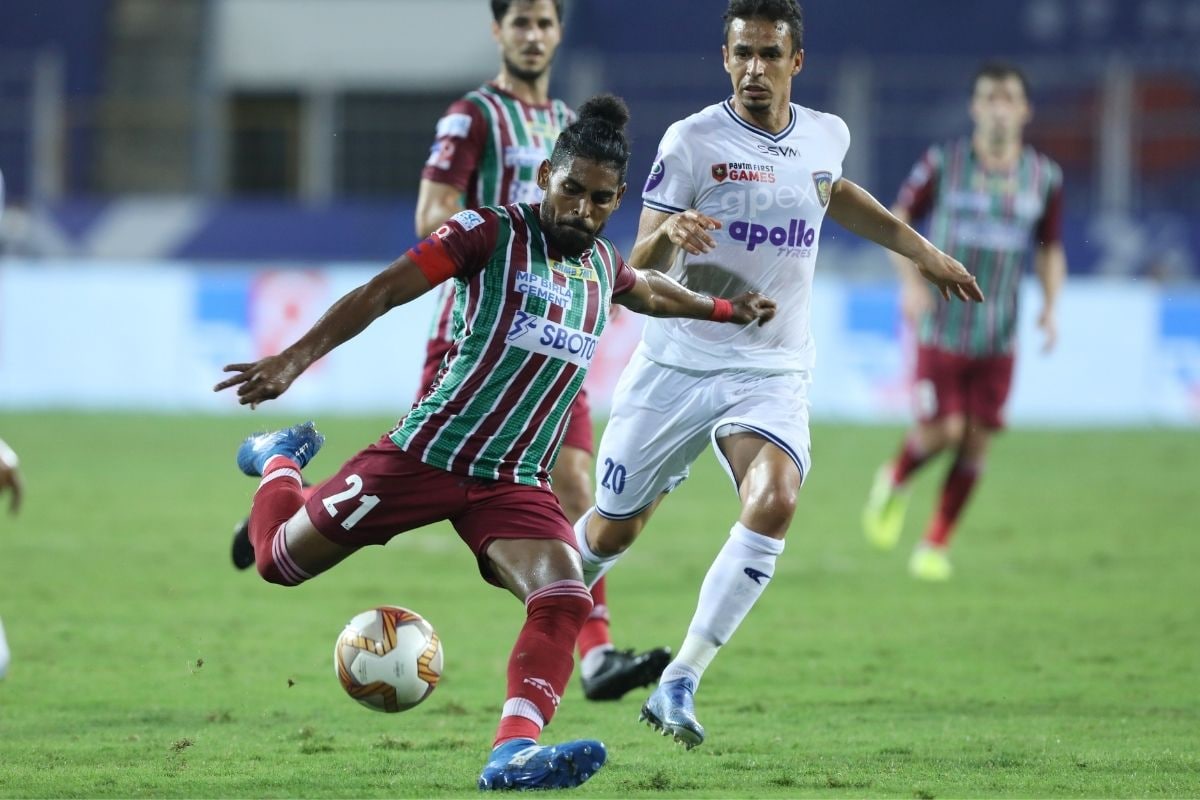 ISL 2020-21 Highlights, ATK Mohun Bagan vs Chennaiyin FC: A last gasp goal by ATK Mohun Bagan's Australian forward David Williams helped them edge past Chennaiyin FC 1-0. It was an end to end contest at the Fatorda Stadium between last year's finalists. Both teams created an ample number of chances, however, they have failed to breach each other's backline. Comparatively,  throughout the match, ATK Mohun Bagan had the better chances. The closest they came to open the scoring was on the 74th minute of the match when Vishal Kaith made a diving save to deny Edu Garcia's free-kick. With this win, the Kolkata-based club reduced the points gap between them and league leaders Mumbai City FC to two points, but they have played a match more. MCFC tomorrow face ATKMB's arch-rivals SC East Bengal at the Tilak Maidan Stadium and they would be hoping that SCEB do them a favour tomorrow night.

The Kolkata team lost to Mumbai City FC and drew with FC Goa which nearly cost them the second spot. Coach Antonio Habas, however, said there is 'no added pressure' on him, despite the results going against his side.

"In championships, you have good moments and sometimes bad. We have played the last two games against the top two teams FC Goa and Mumbai City FC who are capable of winning the league. We are in the top half of the table. Maybe we need to improve," said Habas.

Habas' side have created the least number of chances (81) this season and attempted just 35 shots on target. They have also scored just 11 goals the joint-second-lowest in the league.

"We need to find the right balance between attack and defence. I wouldn't prefer scoring and conceding 25 goals. That's not good for me," the Spaniard said. Roy Krishna, their main attacking outlet, scored five goals in his first six matches but since then, he has scored just one in the last five.

Asked about the Fijian's form, Habas said: "Don't worry this situation will happen. I don't have any problem. This is football. "We have to continue our work. Our idea is to get three points in every match. After that we can think about the playoffs."

The last time the two teams met, they split points after a goalless draw and it will be quite a challenge for ATK Mohun Bagan when they come up against Csaba Laszlo's team, which has kept its play-off hopes alive with the help of some good defensive performances.

Chennaiyin have already kept more clean sheets than they did in the entire last season. However, their progress has been marred by injuries during the campaign, with Rafael Crivellaro being the latest casualty.

"I know my team and I know the actual situation in the team. We lost our captain Rafael Crivellaro. Rafa was an important piece of the puzzle in the system and he was voted one of the best players last season," said Laszlo.