Kolkata is painted green-maroon! ATK Mohun Bagan beat SC East Bengal 3-1 to go five points clear at the top of the points table. Roy Krishna started the proceedings on the 15th minute from a 60-70 yard Tiri cross. It was all ATK till the 41st minute when SCEB found themselves back on level terms thanks to a Tiri own-goal. In the second-half, ATK Mohun Bagan dominated the proceedings and deservedly took the lead on the 72nd minute through David Williams and then increased the lead on the 89th minute thanks to a Javi header. With this win, they completed a league double over their arch-rivals.

90+3'| Ankit Mukherjee with kung-fu move there to foul Sandesh Jhingan. He is lucky to get just a yellow card.

89' | Javi puts the final nail in the coffin with a brilliant header from a Roy Krishna corss.

88' | David Williams OUT, Pronay Halder IN

85' | Bright dances past multiple ATKMB players there, goes near the byline and tries to chip the ball in over the keeper for Pilkington but Arindam deneis him that opportunity.

83' | Narayan Das' cross towards the far post falls for Sarthak Golui, who was all alone there but his header is not on target. Brilliant opportunity missed.

82' | Bright tries to find space and enter the box but there are too many ATKMB players ahead of him.

71' | ATKMB gets a throw-in, which SCEB fails to clear. Sarthak slices the ball while clearing and the ball fell for Raju Gaikwad. He too failed to deal with it. All this was happening inside the box. Roy Krishna got a shot off but it took a deflection and ATKMB get a corner.

68' | Bright receives the ball on his chest, then flicks it to go past Lenny Rodriguez, then dribbles past Tiri, however, he was stopped by Sandesh Jhingan at the edge of the box

62' | Anthony Pilkington is booked by the referee for excessive protest.

60' | Having said that, the match has become a cagey affair now.

59' | I am eating my words! ATKMB is slowly getting a grip of the game. A good passage of play there for the Mariners.

55' | It has been a very evenly fought contest so far in the second-half. The match actually hangs in the balance with almost identical statistics. 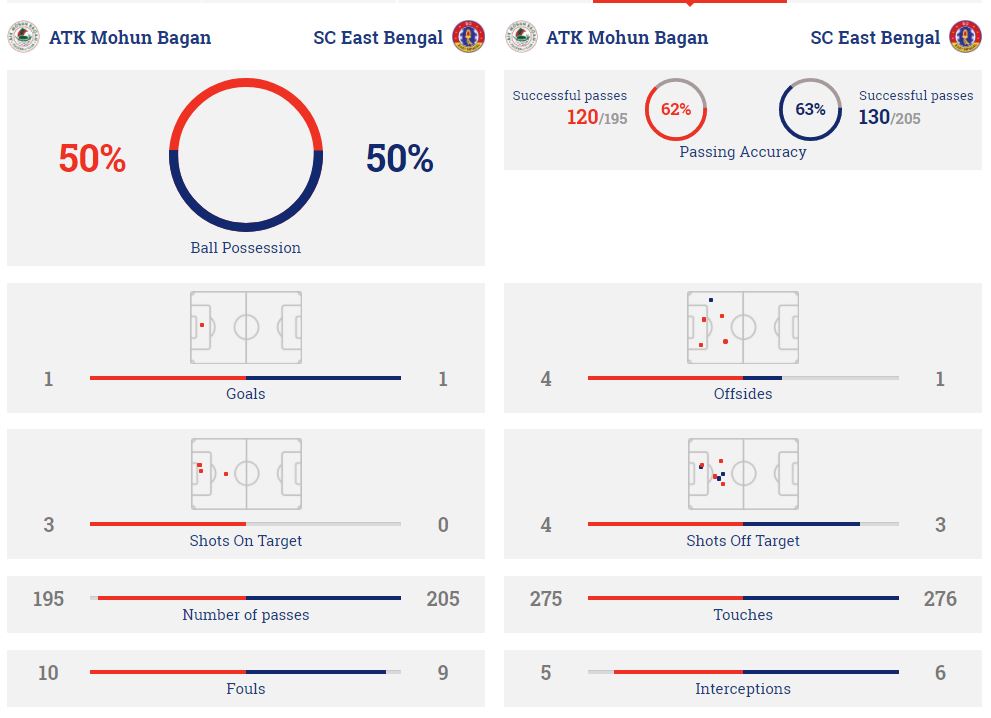 The poll is still on, who do you think will have the last laugh? OR let's say, will it be #JoyEastBengal or #JoyMohunBagan?

50' | David Williams tries his luck from the edge of the box as he volleys the loose ball that fell for him there. But his volley goes way over the bar, thanks to the pressure created by Daniel Fox.

48' | Bright Enobakhare showing some spark there, he gets the ball and shoots from distance. It went over.

47' | ATK Mohun Bagan on the front foot again, it has just been 2 minutes and they have already created two decent chances. First, it was a cross from the far side which went past everyone, the second was Williams' effort from the distance which just went wide.

This the second chance that Roy Krishna got around the 40-minutes mark, Mchugh with the through ball. Who did Robbie Fowler interview a few weeks back? And where have we seen a team facing problems defending their high line? Robbie Fowler's podcast has the anser.

The Kolkata Derby hangs in the balance at the break. ATKMB have been the better team for the most part of the half but SCEB got the equaliser courtesy a Tiri own goal.

44' | SCEB are lucky to find themselves back on level terms. They haven't had a single shot on goal so far and they have created a few half-chances. 41' | It is an own goal by Tiri that has brought SCEB back on level terms. Raju Gaikwad with another long throw into the box and Tiri gets the touch that directs the ball into the back of the net.

39' |  McHugh plays a through ball for Roy Krishna, the Fijian used his space to get the ball and create an opening but his strike was just off target.

This man has been kept quiet tonight by the ATKMB defenders, whenever he is on the ball, he gets surrounded by at least 2 ATKMB players

Adding the spark in @sc_eastbengal's attack ⚡ ISL 2020-21 Highlights, ATK Mohun Bagan vs SC East Bengal: Kolkata is painted green-maroon! ATK Mohun Bagan beat SC East Bengal 3-1 to go five points clear at the top of the points table. Roy Krishna started the proceedings on the 15th minute from a 60-70 yard Tiri cross. It was all ATK till the 41st minute when SCEB found themselves back on level terms thanks to a Tiri own-goal. In the second-half ATK Mohun Bagan dominated the proceedings and deservedly took the lead on the 72nd minute through David Williams and then increased the lead on 89th minute thanks to a Javi header. With this win, they completed a league double over their arch-rivals. Indian Super League match number 99 was being played at the Fatorda Stadium.

Already out of the play-offs reckoning, a beleaguered SC East Bengal would look to spoil arch-rivals and leaders ATK Mohun Bagan‘s party when they face each other in an Indian Super League match on Friday.

As the Kolkata derby marks its 100th year, since the Cooch Behar Cup in 1921, SC East Bengal and ATK Mohun Bagan find themselves in contrasting positions in the ISL table.

ATK Mohun Bagan, impressive from day one of the season, are at the very top of the table and are favourites to walk away with the League Winners’ Shield and an automatic group stage berth in the AFC Champions League next season.

SC East Bengal, on the other hand, are out of contention, unable to recover from a poor start to the season despite improved displays in the second half.

As the two teams take on each other in a landmark Kolkata derby at the Fatorda Stadium, a lot more than three points will be at stake.

For Robbie Fowler, who will be watching from the stands as he is serving a four-match suspension, and his team, it will be an opportunity to give their fans something to brag about in a season where they haven’t had too many chances to do so.

For Antonio Lopez Habas ad his players, a victory is essential in their march to the title.

In any other year, this would be a fixture witnessed by a packed Salt Lake Stadium. This time, the stands at the Fatorda will be empty, but two of the biggest fan bases in the country will be watching with bated breath from their homes.

Throughout the season, the Mariners have been more consistent, scoring more and conceding fewer goals compared to their rivals.

After 17 games, ATKMB (36 points) have secured more than double that of East Bengal’s points tally (17), highlighting the gulf in class between them.

However, despite the contrasting fortunes of the two teams, ATKMB head coach Antonio Habas said that the derby was different from other games.

“The derby is different. The attitude (of players), the level (of pressure) is different than other matches because you have the possibility to change the season with one victory. It’s a dangerous match for us,” said Habas.

For East Bengal, the derby presents an opportunity to set a marker for next season. They came into the tournament much less prepared than others and that showed in their early displays.

However, a much better second half of the ISL has given them something to build on for the next season.

“This derby has got a lot of history and memories. We know how much the derby means to the people. The first derby was a bit unfair on us but now it’s a bit of an even playing field. Hopefully, we can do our fans proud.”