"It's not been easy for me. It was all of a sudden and we knew the relationship we had with Carles, it wasn't easy for us. For all the players, I had to really sit with everyone and talk to them. The players made me feel comfortable and showed me they are professional and here to play football.

"Three sleepless nights, it's not been easy for me. I was confident that we can bounce back. Unlucky goal but the way we played today, we can get back. Even East Bengal, they have been on top, and they were also desperate for the victory. I am sure we will come back and give a positive performance in the next match.

"I want to rely on the youth now. The way Parag played in the first game, it was unlucky he got injured. Bhutia, Amay, they were nervous but it was their first game. I do want to give them more time. We still have 10 games to go and it's not over for us."

Eric Paartalu After the Game

"It has been a poor run for us. Tonight I thought was a much-better performance from us and this may be stepping stone.

"We take it personally with BFC, we have to go out there and apply ourselves and get results. But unfortunately, we haven't been able to do that this week.

"We see the quality of the young guys in the training and it's about giving chances to them. Next season, the rules are changing for the foreigners so they are important."

Bright Enobakhare After the Match

"We all did well, we are pleased with the points, that's what we wanted.

"He just told me to enjoy myself in the game. He told me to go and just try and go for it. Ya, this one I thought I was offside but I was not. I now just have to look at the next game."

Hero of the Match Debjit Majumder at the Presentation Ceremony

"Winning team's motivation is huge, we needed this win. We had worked hard a lot, this win will motivate us.

"Our fans support us a lot. We hope they stay with us and keep motivating us."

Bengaluru FC had more shots on target and more shots overall but the Hero of the Match Debjit Majumder was up to the task and helped SC East Bengal get the big win. 90+3' | It's all about desperate attempts from Bengaluru FC at the moment. They are desperate for a point here but SCEB have done well to hold them off so far with Debjit making a couple of big saves.

85' | So close yet so far! Great work from Deshorn Brown to lay it off for Paartalu but excellent work by Fox to just stick his leg out and block Paartalu's shot.

77' | Rafique comes in for Harmanpreet

81' | Amadi comes on for the goalscorer Steinmann

81' | Oh, what a moment! Bright was through on goal once again after dancing his way around three Bengaluru FC defenders but Gurpeet just took a slight touch on the ball that got it away from Bright. Stunning stuff!

79' | SAVE! Bright was in a great position outside the box and went for goal and Gurpreet dived to his left to make a massive save.

73' | Harmanpreet finds himself free in the box but takes a wild, wild shot. That was a very good chance for SCEB!

62' | What do you have to do to score past Debjit? Chhetri with another powerful shot at goal and Debjit, on full stretch, fingertipped it out for a corner. Opseth gets his head to the corner kick but heads it wide.

53' | Bengaluru FC have come back in the second half with a game plan. They are taking to East Bengal and putting them under pressure. A brilliant pull back from Opseth but no one catches that.

48' | Excellent save from Debjit! Brilliant one-two between Chhetri and Opseth and Chhetri takes a stunning shot at goal and Debjit makes an equally solid save.

The second half is underway at the Fatorda! Bengaluru FC will have to find more time on the ball and find a way to stop the diagonal balls that have been troubling them.

SC East Bengal, as expected, had more of the possession. Even though Bengaluru FC had more shots than SC East Bengal but SCEB were clinical and they just did more with the ball than BFC. 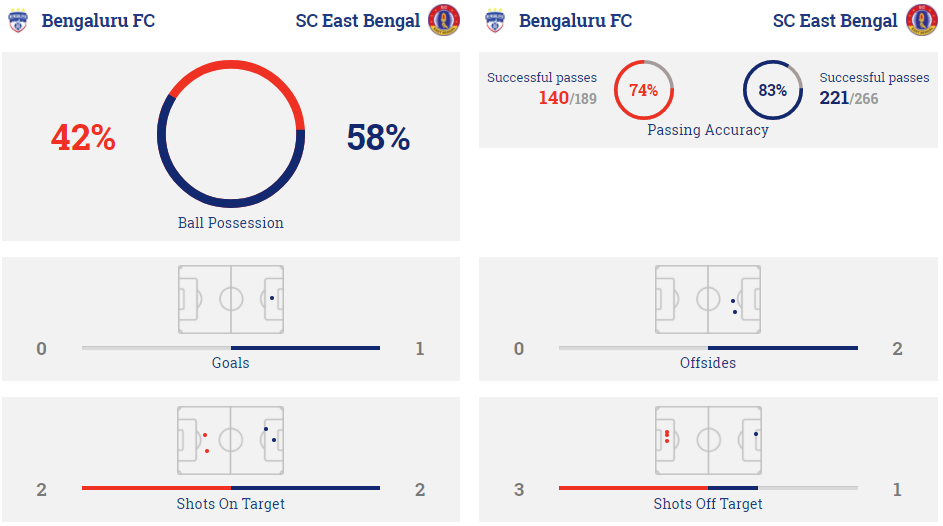 And that's it from the first 45 minutes! Matt Steinmann's goal is the difference between the two teams so far. SC East Bengal have been the better team overall even though Bengaluru FC pushed hard towards the end and had a couple of good chances. SCEB troubled BFC a lot on the wings with diagonal balls and Narayan Das and Ankit Mukherjee running havoc. Naushad Moosa has been trying hard to push his team from the sidelines. The second half should be an interesting one.

45' | Bengaluru FC are going hard right at the end of this first half. It's like header after header to get the ball in the danger area but they've not been able to get that precious goal.

40' | Eric Paartalu becomes the third Bengaluru FC player to be booked so far. While in a battle with Maghoma, he keeps pulling Maghoma's shirt and the referee finally blows his whistle.

38' | Another intricate set piece routine from Bengaluru FC and Chhetri heads the ball into the danger area from the far post but Fox is successful in making the clearance.

35' | Excellent solo run from Scott Neville as no one from Bengaluru FC gets close enough to him. He then passes the ball to Ankit on the right flank and he puts in a very intelligent pull-back but no one else is on the same wavelength as him and the Bengaluru defence takes care of the ball.

33' | Paartalu releases this one and his shot is on target but Debjit is up to the task.

28' | What a chance for Harmanpreet! Bright with a beautiful through pass to Ankit but it has just a little bit more pace on it and a stretching Harmanpreet cannot toe it.

26' | SC East Bengal are playing beautifully at the moment! A stunning cross on the right to Harmanpreet and he sends a delicious ball in the middle but it's just off the mark and a running Narayan can't time it well.

21' | Now, Dimas goes into the referee's books for a foul on Bright.

20' | GOAL! Matt Steinmann puts SC East Bengal in the lead. Ankit's cross is not dealt with well by Ajith and Juanan and it reaches Narayan Das on the left. Narayan passes the ball towards Steinmann in the middle, who gives it a beautifully disguised finish.

19' | Ajith Kumar goes into the referee's books for bringing down Bright.

18' | A dangerous ball in by Ankit from the right flank but Gurpreet half-jumps into the air to collect the ball in time. That was really good goalkeeping! 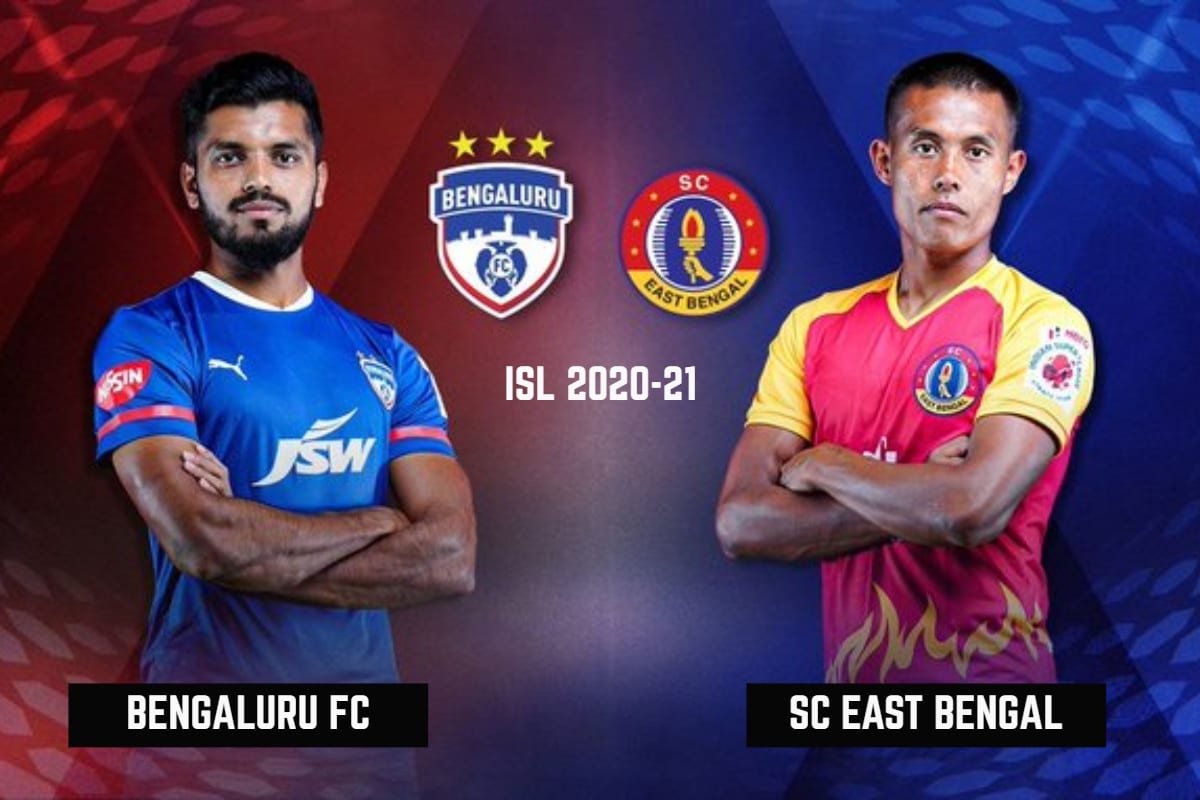 ISL 2020-21 Bengaluru FC vs SC East Bengal HIGHLIGHTS: Bengaluru FC lose 1-0 against SC East Bengal as Naushad Moosa failed to register a win in his first match as interim manager in the Indian Super League (ISL) 2020-21 Match No.52 at the Fatorda Stadium on Saturday. Bright goes on his brilliant run once again but just a slight touch from Gurpreet takes the ball away from him. Sunil Chhetri with a fizzy shot at goal but Debjit makes an excellent save to deny him in the 48th minute. Bengaluru FC pushed hard towards the end of the first half but were unable to bulge the net. SC East Bengal are dominating the game with excellent movement between the lines and on the wings with Narayan Das and Ankit Mukherjee. Matt Steinmann gives SCEB a 1-0 lead in the 20th minute with a beautiful finish. SC East Bengal start on an attacking note. Ajith Kumar gets his first start of the season for Bengaluru FC while Parag Srivas gets his first ISL appearance. Bengaluru FC and Cuadrat mutually parted ways after the team's 3-1 loss against Sergio Lobera's Mumbai City FC and will aim to get their season back on track. SC East Bengal, on the other hand, are coming into the match after a morale-boosting 1-1 draw vs FC Goa where they held the top 4 team despite being a man down. Follow all the live updates of Bengaluru FC vs SC East Bengal in News18 Sports' blog. Yesterday, Hyderabad FC jumped to the third spot in the points table with an entertaining 4-2 win over NorthEast United FC.

Bengaluru FC are currently sixth in the points table with 12 points from nine games. If they win today, they can go level on points with FC Goa and Hyderabad FC and jump back into top 4 depending on their goal difference. East Bengal are currently in the ninth place with seven points in nine matches and will be looking to match Chennaiyin FC's points tally.

The interim coach exuded confidence ahead of their clash with SCEB. "We have an important game tomorrow. The players know it. In these seven years, this has happened for the first time. We have lost three games in a row. It is not easy for them to digest. They want to bounce back. We have to leave behind everything and focus on the next game," Moosa said.

Interestingly, East Bengal boss Robbie Fowler is suspended for the game after receiving his second caution of the season in the previous game. However, Danny Fox's red card from the previous game was overturned by the AIFF and he will be available for the game. Bright Enobakhare, the scorer of the wonder goal against FC Goa, said, "It's a great time for me. The players and the staff are amazing. We just have to focus on the next game and try to get as many points as we can by the end of the season. I think everything will come into place. It's going on and we'll see how it goes till the end of the season."