90+2 | Lucky escape for Mourtada Fall, he lunges in with his feet in the air and yet gets just a yellow

90' | Ahmed Jahouh is booked for a deliberate handball

88'| Ortiz makes a good run there but Mourtada Fall takes advantage of his height and denies Ortiz the opportunity.

The game has opened up once again, both teams are testing each other's backline more often.

83' | Jahouh fires in a searching ball from the corner quadrant, Fall gets his head to it but it not on the money.

73' | Ogbeche receives the ball just outside the box then fires in a volley but his effort is high and wide.

65' | Glan Martins is booked by the referee

59' | Saviour Gama scores to restore the lead for FC Goa.

Once again, the @FCGoaOfficial shot-stopper comes out on 🔝

55' | Mandar who is playing the right tonight, fires in a ball inside the box with his left foot, the ball finds Ogbeche but his header was off target.

50' | Ogbeche misses a golden opportunity to give Mumbai the lead. Le Fondre and Boumous plays a few good passes as the Englishman breaks into the box, he misses the opportunity to shoot but the ball falls for Boumous who finds Ogbeche in fron of the goal but Ogbeche he fires high.

46' | Action resumes at the Fatorda Stadium, another exciting half awaits us, hopefully!

The match hangs in the balance at the break, even the stats are almost the same. 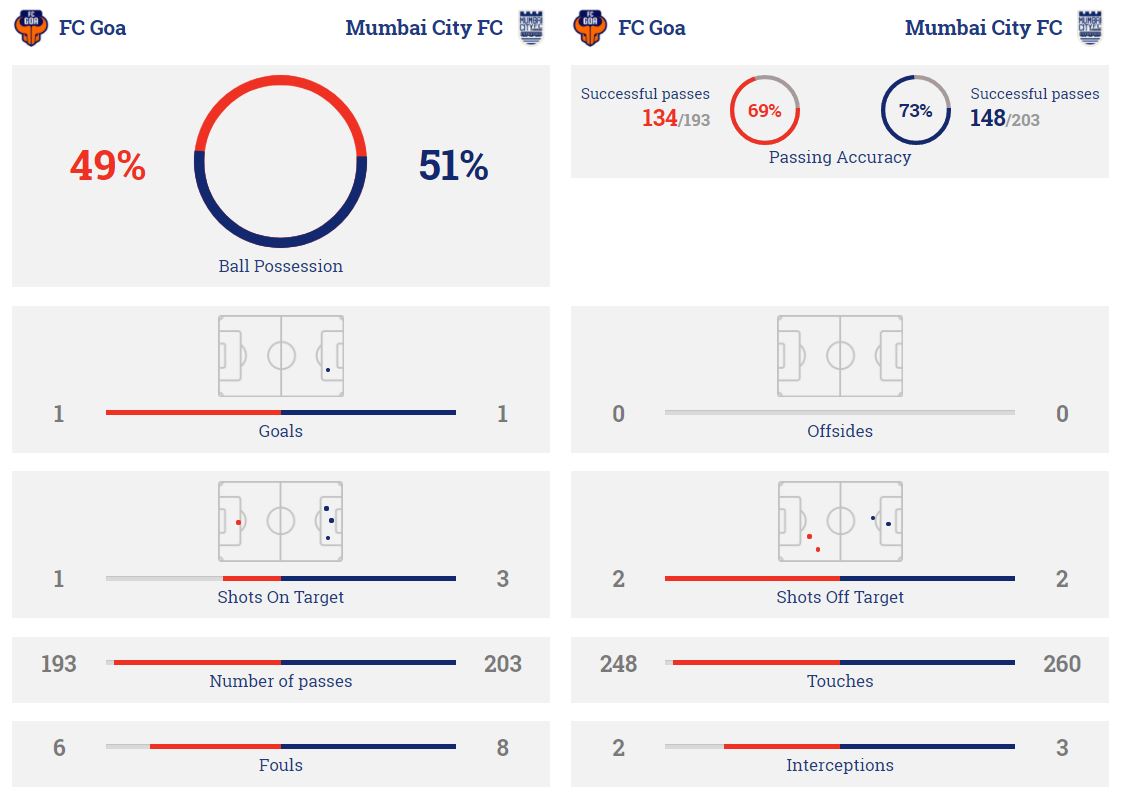 It is all square at the break. Igor Angulo's opener for Goa was cancelled out by Boumous.

45+2' | Dheeraj Singh is down after clashing with Mourtada Fall.

45+1' | Mandar Rao Dessai is booked by the referee

44' | Another penalty shout from the FC Goa camp but this time the referee waves it off. Ortiz was again the man who went down inside the box.

40' | Edu Bedia takes the responsibility but his effort fails to cross the wall. ISL 2020-21 Highlights, FC Goa vs Mumbai City FC: 119 seconds, yes just FC Goa’s lead for the second time in the match stayed for just 119 seconds. After Saviour Gama put Goa ahead, Mourtada Fall scored a free header to put Mumbai back on level terms. Earlier, former FC Goa player Hugo Boumous has equalised for Mumbai City FC. The Frenchman got lucky there as the ball ricocheted off Saviour Gama fell in his path. He then takes his time and fires a volley into the bottom corner from inside the box. Igor Angulo gave FC Goa the lead from the penalty spot after Mandar Rao Desai brought down Jorge Ortiz inside the box.

The first leg of the first semi-final is off to a bright start, bot the teams have created chances inside the first ten minutes, however, none have been able to find the man in the middle who would break the deadlock.

One of the most consistent teams in the history of the tournament, FC Goa will look to take a step closer to their maiden Indian Super League title when they face table-toppers Mumbai City FC in the first leg of their semifinal fixture here on Friday.

Goa have secured playoff qualification a record six times but they could never manage to lift the ISL trophy, having lost the finals on two occasions.

Come Friday, the Gaurs will look to put it past League Shield winners Mumbai City FC to inch closer to the dream of lifting their first-ever trophy. Having qualified for the playoffs for the fourth-straight time, Goa are only behind Mumbai in terms of goals scored, alongside NorthEast United.

They have form backing them too, having been unbeaten in 13 games now — a feat no other side has managed in ISL history. Facing Mumbai will not be an easy task but coach Juan Ferrando hopes his players stick to his philosophy as they aim to go all the way.

“If we enjoy the game, we will have success,” he said. “Sometimes there is pressure because everybody wants to win but for me, it’s important our players to want to play (our way). I am scared when my team is not playing football (our way) because it’s difficult to help the team. But all our players want to participate and stick to our style.”

However, they will have their task cut out with Ivan Gonzalez and Alberto Noguera missing out due to suspensions. While Goa top the charts for most possession (58 per cent), Mumbai (57 per cent) are not too far behind. Dominating possession has worked for Lobera’s side, who have netted a whopping 35 goals.

During the last meeting between the two sides, Ferrando had stated that the pressure was on Mumbai to win the League Winners Shield. And having achieved that target, Lobera will aim to prove a lot more to his former employers.

“I love when others speak about Mumbai City as a favourite team since they are thinking we are better than them,” he said.

“It’s good for us. I love this pressure but we need to prove ourselves on the pitch.” Similar to Ferrando, Lobera too, wants his players to enjoy themselves rather than take pressure.

“It’s a special game,” he added. “We need to be smart and ready to play 180 minutes and tomorrow is the first step. We are excited and I hope we enjoy (the challenge).” Mumbai will be without Amey Ranawade (suspended) while Hugo Boumous returns after a four-match ban.