All Square at the end!

A game of two halfs as the first saw a mid-field battle and in the second, as the teams opened up in search for goals, saw two. A few suspect decisions from the referee means it ends level on the night.

In the dying moments of the game though, Hyderabad FC coach Manuel Marquez was shown a straight red for comming ont othe field of play.

What a chance for Peter Hartley to win it for Jamshedpur but his header is over the crossbar.

Ealier was also booked by the referee.

Stephen Eze equalises for Jamshedpur! What a strike!

Nerijus Valskis sent in an excellent cross as Chinglensana Singh headed it away but only as far as William Lalnunfela, who in turn lays it off for Eze. The 6-foot-6 defender blasted it past Laxmikant Kattimani to draw his team level.

Jamshedpur is throwing everything at it now.

Laldinliana Renthlei is on the match on the right wing and sends in a beautiful cross. Stephen Eze is there to head it but his effort is off target.

Jamshedpur FC players are not happy with the referee's decision as he disallowed the goal. 74' - Another change for Hyderabad!

Adil Khan is on for Hitesh Sharma. A good game for Hitesh and Adil is definately a defensive-minded substitution.

Hyderabad's Laxmikant Kattimani punches the ball from a free-kick straight into his own player (Aridane) and the ball goes to the back of the net but the play is called back for offside. The Jamshedpur players can't beleive it.

Aniket Jadhav is on the move from left wing but Nikhil Poojary is there this time to intercept it and and kick it out of play.

67' - Asish is brought off for Poojary

Earlier Aniket Jadhav was booked by the referee. His shot after cutting in from the left wing was blocked by Hitesh Sharma.

Isaac Vanmalsawma is brought in place of Jackichand Singh and William comes in for Lima. Can he make the difference and draw his side level?

Liston Colaco collects the ball on the break and has two in support against just one in defense. He choses the free Asish Rai on the left  but the right back hesitates and his shot is blocked by Laldinliana Renthlei.

Pawan Kumar is tested again as Joao Victor's free-kick is deflected off Stephen Eze as the keeper dives to his left to collect it.

Halicharan Narzary again was the one to start off the move from the left flank as he beat Laldinliana Renthlei let another shot off. Pawan Kumar tries to parry it away from danger but is Aridane who is there to slot it home for the lead.

We go again in search for the first goal of the match as Hyderabad FC and Jamshedpur FC restart!

One change so far as Aniket Jadhav comes on in place for Amarjit Singh for Jamshedpur.

That's that. Half Time! It is goalless at the breakk between Hyderabad FC and Jamshedpur FC!

It really has been a drab affair with little moments of individualbrilliance not enough to trouble the scorers.

Halicharan Narzary's attempt in the 41st minute, which hit the post, was undoubtedly the best chance of the first half.

This game should be much more open in the second 45 minutes.

Stephen Eze is the first to go into the referee's book for his rash tackle on Aridane Santana.

Aridane Santana got the ball in mid-field and holds on to it to set Halicharan Narzary off on the left flank. The Indian winger cut inside to beat Laldinliana Renthlei and shoots.

Hyderabad could have got the lead as the shot/cross hits the outsie of the post and rolls out for a throw-in.

Both teams are missing their mark in terms of successfull passes.

Liston Colaco doing his defensive duties as Ricky Lallawmawma's ball from the left flank is well blocked with a sliding tackle.

Halicharan Narzary steps away from a sliding tackle from Eze and sends in a cross for Aridane, but the forward is thwarted by Laldinliana Renthlei with an interception.

Pawan Kumar is there again. This time it is Mohammed Yasir who snap-shots it at the face of goal but the goalkeeper punches it out to safety.

JFC's Jackichand Singh gives it a rip from distance but Pawan Kumar is there to tip it over.

Dinliana receives the ball on the right flank, cuts it past HFC's Akash. It rolls towards Jacki who hits it and Pawan tips it over in time.

It is a real tussle in mid-field. Liston Colaco controls the ball and passes it on to Asish Rai, who in turn tries a shot but it is long as Halicharan Narzary mops up and sends in a cross. Pawan Kumar though manages to punch it away to safety.

Aridane Santana waiting in the penalty box but the ball doesn't reach him...

16' Three crosses from either flank in the space of a minute but all of them too deep for Aridane waiting in the middle. Hyderabad now finding their feet.

Up and Over! Liston Colaco tries a shot from a free-kick after Stephen Eze's late tackle on Aridane Santana. The ball though flies over Pawan Kumar's goal.

Hyderabad FC  for their first attack was foiled by the defense as Liston Colaco was tackled successfully after Halicharan Narzary found him after a tussle and in midfield.

Jamshedpur FC's Peter Hartley finds on the right flank but the Indian forward fails to get past his man and the attack fizzles out.

The teams are getting ready, going through the paces as Hyderabad FC and Jamshedpur FC in the final warm ups ahead of the kick-off. 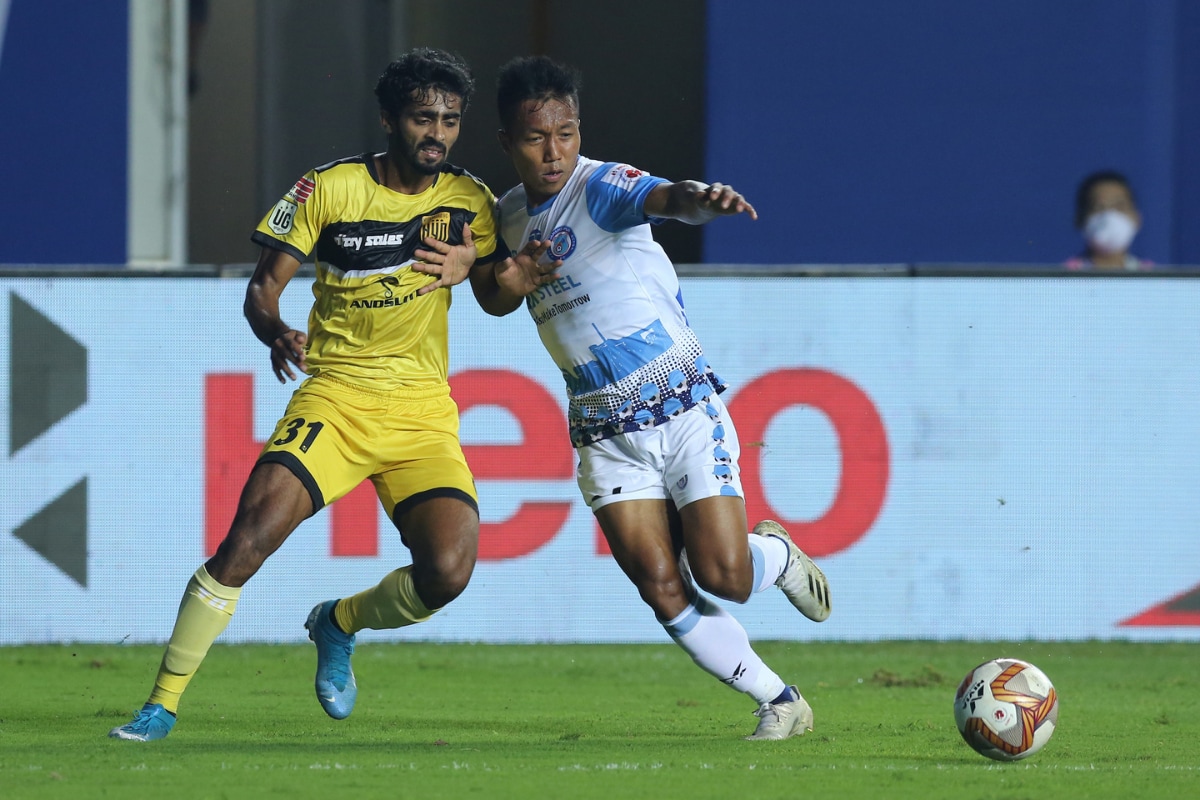 ISL 2020-21 Highlights, Hyderabad FC vs Jamshedpur FC Latest Updates: Aridane Santana gave Hyderabad FC the lead as Stephen Eze equalised for Jamshedpur FC in their Indian Super League (ISL) match at the Tilak Maidan Stadium. The best chance of the game previously had came in the 41st minute as Halicharan Narzary's attempt grazed the wrong side the post. In the Hyderabad had the ball go inside their goal but the referee ruled off-side much to the astonishment of Jamshedpur. MATCH REPORT

It took less than five minutes for Hyderabad to launch their first attack. Quick passing from Hyderabad allowed them to venture deep into Jamshedpur territory but Akash Mishra's final delivery in to the box failed to find Liston Colaco. Jamshedpur dominated play in the first quarter. Nerijus Valskis and Alexandre De Lima kept the home defence on their toes with constant raids.

For Hyderabad, young Liston showed maturity beyond his age, supporting the defence while not neglecting his attacking duties. He nearly got his name on the scoresheet when his 12th-minute free-kick beat the wall but failed to find the goal. Hyderabad were unlucky to have been denied by the post just before the breather. After getting hold of his marker, Santana found Halicharan Narzary, who dribbled past Laldinliana Renthlei.

Having done everything right, Narzary was frustrated as his narrow-angled shot came off the far post. Hyderabad were ahead five minutes after the restart with Santana scoring off a rebound. Narzary danced his way past Renthlei and pulled the trigger. Goalkeeper Kumar only succeeded in diverting it into the path of Santana, who rolled the ball into the net.

With less than 20 minutes left, JFC thought they had scored, only for it to be disallowed by the referee. But their efforts finally paid off in the 85th minute when Eze fired home from inside the box. Chinglensana Singh's clearance off a Nerijus Valskis cross fell to William Lalnunfela who laid the ball for Eze. The Nigerian made no mistake with his powerful shot.