"Not too much secret. I think in the first half, we didn't play good football. I think Kerala played better than us. But the first goal came. When you are in a position like Kerala and Hyderabad, the first goal was very important. Then we were very comfortable and we scored more goals. Practically, now we are sure in Top 5 and we need one more win.

"For me, he is one player who understands the game very well. He knows what he has to do every moment. He played after three games because he wasn't 100 per cent. 60-65 minutes was enough for him. The young players in this team, Hyderabad can be proud of these guys. I am very happy with them.

"Ask me that after next game because we play ATK Mohun Bagan and that's going to be hard. Both our fixtures (vs ATKMB and FC Goa) are tough but we are good opponents. Today it is our 10th straight game without losing. The five top teams deserve to make the playoffs but only four can and let's see what happens. I hope we can make the playoffs."

"I think the match was very even and we had good chances in the first half and we competed well. But then we again conceded goals. It's been the story this season.

"He had an injury (Rahul KP). He trained only yesterday and couldn't play 90 minutes. Unfortunately, we had injuries for good attacking players - Sahal, Puitea and Rahul. The team competed well and it was important today to score the first goal. There was a possible handball in the Hyderabad box. Congratulations to Hyderabad for their last 30 minutes of the game.

"After tonight, we have no chance to be in Top 4. We are going to do everything we can to prepare for the last two games. I am happy with how we have trained but during the whole season, the defence was not good enough. We are working in training but it hasn't come to fruition. The club has to prepare for next season.

"For me, this season is very frustrating. We worked hard ahead of the season to get the best possible training. We had a very short pre-season. Then, we didn't start the season well. Since then, we haven't been able to be consistent."

"We have been keeping clean sheets in last games as well but we haven't been able to convert our chances. It was good in that sense today.

"Credit goes to the team and the coach for having faith in us. The continuation has helped us understand each other and play better.

"Not surprised at all (by the performance) because we worked hard as a team. We came in very focussed. They had a good project, which I believed in and hence I joined this team."

What a win for Hyderabad FC! This one gives them a huge advantage in the playoffs race as they climb up to the third position in the points table. A Fran Sandaza double and a goal each from Aridane Santana and Joao Victor helped them crush Kibu Vicuna's Kerala Blasters. It was another terrible defensive performance from Kerala Blasters and they were punished immensely. The first half saw Kerala miss a few half chances and they were made to rue them in the second half as Hyderabad went full throttle and took it all away.

90+1' | GOAL! Almost a carbon copy of the third goal. Sastre whips in another free kick and Santana gets his head to it and it falls for Joao at the far post and he pokes it in.

86' GOAL: A thumping header from Aridane Santana after a dangerous ball from Lluis Sastre means we are 3-0 up with not much long left to play in Vasco.

73' | Delhi boy Ayush Adhikari makes his ISL debut as he comes on for Gary Hooper.

63' | Fran Sandaza just lifts it over the keeper on the left side and Albino Gomes on the opposite side to his left. A cool, calm and composed penalty that.

62' | It was the keeper's call and Albino Gomes brought down Joel Chianese in the box and gave away a penalty.

58' | GOAL! Fran Sandaza breaks the deadlock to give Hyderabad FC the lead. Another defensive error from the Blasters. Kone just has to clear the ball and completely misses the ball. Chianese is there to get to the ball and tries to go towards goal. Chianese is tackled by Costa but the ball falls for Sandaza, who slots it in.

56' | It's been an extremely scrappy game of football so far. None of the teams want to keep hold of the ball it seems.

64' | Rahul KP and Juande come in for Seityasen and Kone, respectively.

47' | MISS! What a massive miss from Joel Chianese. A brilliant cross from Aridane from the right towards Chianese in the middle. He gets around Costa, who slips and as Albino comes forward making himself big, the Australian shoots the ball over.

Not a single shot on target from Hyderabad FC in the first 45 minutes while Kerala Blasters had four. However, it's still goalless at half time. A lot of chances for Kerala Blasters to take the lead but they were unable to make it count as has been their story this season. Hyderabad FC have struggled to get themselves into the game and have hardly created anything substantial. It's been a scrappy game and Kerala Blasters could clearly have taken the lead.

39' | Huge mistake at the back from Hyderabad from Akash Mishra and Kattimani is way off his line, leaving the goal completely open. Prasanth gets to the ball but shoots straight into Kattimani's hands. That was poor from Prasanth and Kattimani is lucky to have made out of that unscathed.

36' | Good play between Denechandra and Sandeep. Sandeep somehow gets a cross in the middle towards Murray but it's not a great clearance and it almost fell for Denechandra but it blocked away.

29' | A good cross in the middle towards Murray who chests it down towards Hooper. Hooper goes for goal and Kattimani was in an awkward position but is lucky as it hits his arm and goes out.

21' | A through ball played towards Fran Sandaza and Albino Gomes come forward but completely misses the ball. Costa was there to save the day for his keeper.

15' | It's been a scrappy game so far with none of the teams being able to hold on to the ball for a long period of time and put sustained pressure on the opponents.

4' | Good ball floated in by Sandeep from the right and Odei has to head it away for a corner. In about the fourth phase of the set piece, the ball falls dangerously in front of the goal but Mishra clears it.

We are underway at the Tilak Maidan. Kerala Blasters kickstart the match.

One of the match winners for Kerala Blasters in the last match against Hyderabad FC is on the bench - Abdul Hakku.

Good luck for @HydFCOfficial in his crucial match against @KeralaBlasters. I can't wait the game started. Vamoooos!

Kerala Blasters have a number of goalscorers this season, Jordan Murray being the most effective.

Hyderabad FC have been unbeaten in their last nine games but four of their last give matches have ended in a draw. Can they get a crucial win today?

WHEN THEY LAST MET
Hyderabad FC and Kerala Blasters last met on December 27 and the Blasters sprung a surprise with a 2-0 win. Central defender Abdul Hakku and Jordan Murray had scored the two goals to get Kerala the win. Hyderabad had more of the possession in that match, took more shots but equal number of shots on target (5) with Kerala Blasters. The Blasters were just more clinical and off their 14 shots, got two into the back of the net. 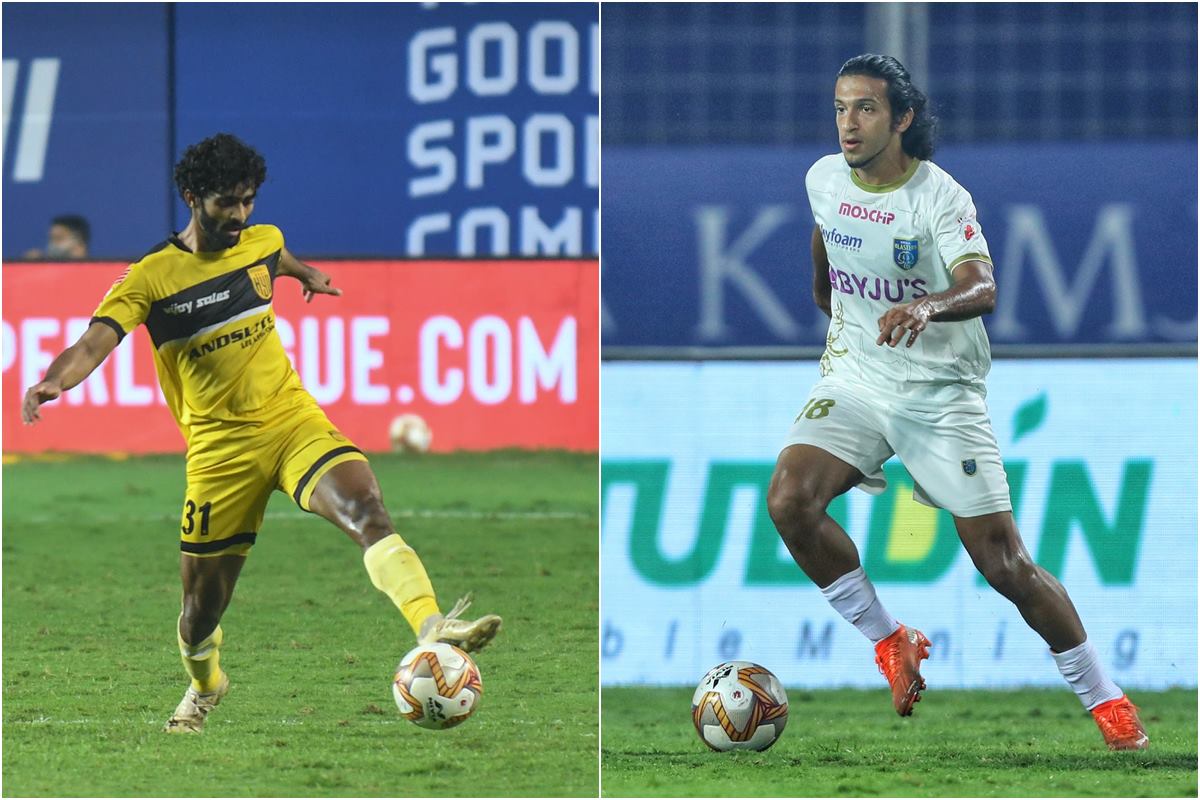 ISL 2020-21 Hyderabad FC vs Kerala Blasters HIGHLIGHTS: Hyderabad FC beat Kerala Blasters 4-0 in the Indian Super League (ISL) 2020-21 during Match No.96 at the Tilak Maidan in Vasco, Goa on Tuesday. With the win, Hyderabad FC climbed up the third spot ahead of NorthEast United FC and FC Goa and this big wins gives them a huge advantage in the race for the playoffs. Joao Victor pokes in Aridane’s header from another Sastre free kick. Aridane Santana heads in a Lluis Sastre’s free kick to score Hyderabad FC’s third goal. Fran Sandaza converts from the spot to double Hyderabad FC’s lead. Delhi boy Ayush Adhikari makes his ISL  debut as he replaces Hooper. Sandaza breaks the deadlock to give Hyderabad FC the lead. A huge miss from Joel Chianese right after the start of the second half as he is through on goal but shoots it over. A few half chances for Kerala Blasters but they haven’t been able to make them count. For Hyderabad FC, there’s just not been enough from them on the ball. It’s been a scrappy start to the game with none of the team being able to keep hold of the ball for long.

Hyderabad FC and Kerala Blasters last met on December 27 and the Blasters sprung a surprise with a 2-0 win. Central defender Abdul Hakku and Jordan Murray had scored the two goals to get Kerala the win. Hyderabad had more of the possession in that match, took more shots but equal number of shots on target (5) with Kerala Blasters. The Blasters were just more clinical and off their 14 shots, got two into the back of the net.

Hyderabad FC head coach Manuel Marquez made it clear that he was not going to take Kerala Blasters lightly even if they had a leaky defence. “All the other teams, from Kerala who are second from the bottom, till the top positions, can climb positions in the table,” he said. “We will play with Kerala with our style. We will not change that because (we need to win). We are nine games unbeaten but six of them are draws. We have to continue in the same vein and try to win the game because our season has been fantastic. We want to be in the top four.”

Plenty of drama can be expected from these two sides right until the final whistle. Fourteen of Kerala’s 22 goals have come in the second half while Hyderabad have scored 16 goals after the break – the second-most by a side this season. “We have a lack of balance between attack and defense,” Vicuna stated. “Most of our games, we have been creating more chances than the opponents but we are not getting the points. We have to improve this aspect. We are working and analysing our mistakes. We are trying to have a more positive percentage in the relation between creating chances and scoring goals.”