"We changed a little bit tonight because of the players we had. The central defenders were not in the squad but I am very happy with the performance of Sandeep and Hakku and Jeakson in the middle. It is not the football I love but it was more practical and we got the win with it.

"Let's enjoy tonight and then we can think of the next game tomorrow. For me there is no difference between Indians and foreigners, it's about how they train. I am very happy for the Indian central defenders today." "We are very disappointed, we couldn't make our game today. They started better than us and we weren't 100 per cent focussed and that makes it tough to win.

"I don't know what was in the heart of everyone but we weren't focussed. May be we were thinking they hadn't won. Now we have lost two and we cannot lose the next game."

"I am very disappointment, not only for the score. We had clear chances even before 2-0. I am not happy with the performance of the team. There are players who are tired. May be we are playing with same players and when they are tired, it's not good. For example, Liston is tired and could not play 90 minutes. But we have to give it to Kerala, a good win for him.

"I am not satisfied with how the team started the game. It was like we play here and the other team has just three foreigners.

"Joel and Lluis are good to play. We play on Wednesday but that may be is too soon. May be one of them can play. And let's see if we can sign another foreigner. Today we got Fran and he could get the equaliser today but he will be important. Two straight defeats but we have to prepare for the next game."

Jordan Murray After the Match

"I am over the moon. It has been a difficult start for us but today we showed a bit of confidence and grit and that's what we have been missing.

"Me and Gary are quite good friends and I look up to him. We push each other. But obviously, I would like to start. It is a competition but we help each other.

"It just popped up and suddenly I had the goal to shoot at. The keeper is going back across and is wrong-footed. So good to get the goal and will take that confidence into the next match.

"We've been training crossing and defending. We wanted to exploit Hyderabad and we did well today. Sahal, Rahul and Facundo did the job. Sometimes, it is just the matter of three points. I am happy with the goal and I couldn't have done it without my teammates." 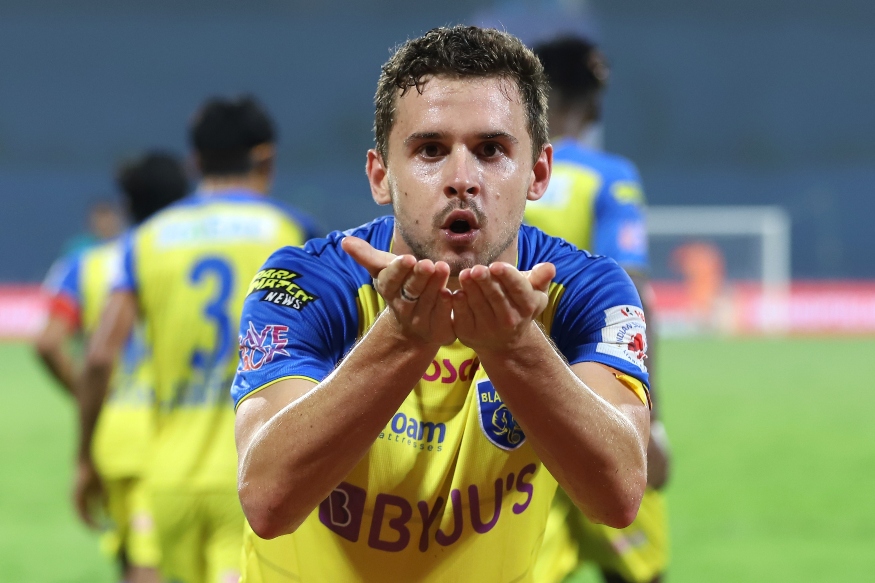 Hero of the Match Jeakson Singh After the Game

"This win was really important for us. We hadn't got a win. Now, all the focus on the next game.

"It's all about getting day by day. I think I am getting better and I am happy with my performance.

"This win will boost our energy and our confidence as well."

And Kerala Blasters have registered their first win of the season, courtesy goals from Abdul Hakku and Jordan Murray. Hyderabad FC were off colour with Aridane Santana even missing a huge chance. Kerala Blasters played as a unit and gave their fans the New Year gift!

Full Time at Bambolim and a hard result to take.

88' - GOAL! Jordan Murray increases Kerala's lead. Rohit Kumar's cross from the left richochets off Adil Khan straight into Murray's feet, who makes no mistake and finds the back of the net.

87' | A great run in the box by Sandaza as Abdul Hakku fails to clear the ball but Albino steps up and makes the big save.

82' | Jordan Murray with the pass for Rahul KP and Akash Mishra feels to deal with him and Rahul shoots for goal but Subrata parries it away for a corner. Pereyra's corner goes above everyone!

80' | The referee plays advantage after a foul on Fran Sandaza in the middle of the park and Halicharan Narzary does well to give himself some space and goes for goal but misses the mark.

78' | Rohit Kumar comes on for Sahal Abdul Samad. Rohit is up against his former team

90' | Murray goes off as Prasanth comes in

Centre-back Abdul Hakku, who has scored the only goal of the game so far, has had a solid night so far defensively as well. He has made three clearances, seven tackles and 14 passes. 72' | Rahul KP brings down Akash Mishra and with him already on a yellow, the referee warns him about getting a second.

67' | Pace from Danmawia on the right flank and after a little ping pong, he puts a delightful cross in the middle but it touches a Blasters' man and Albino collects the ball. Relief for the Blasters!

That attempt from Vicente Gomez!

74' | Fran Sandaza, who couldn't start a single game so far due to injury, comes on for Hitesh Sharma

63' | Dangerous move from Hyderabad! With pressure on him, Nishu gives the ball away and Akash Mishra's attempted pass in the middle make it to Hakku's feet who tries to clear it away and it hits his centre-back partner Sandeep Singh in the face.

58' | Big save from Subrata Paul. Kerala Blasters break again and Murray puts the ball across for Rahul KP who goes for goal. Subrata makes a diving save to keep Hyderabad in the game.

56' | Half chances for the Blasters with Jordan Murray terrorising the Hyderabad defence. Hyderabad are extremely fortunate to not have conceded there. Kerala's attacking intent coming out in the second half has been good.

52' | Nishu Kumar looks like he is fouled but the referee waives play on and Abdul Hakku has to make the clearance from the cross and Kerala do well to clear the danger there.

51' | Sahal misses by inches! Pereyra passes the ball on the left to Sahal, who goes for goal from a tight angle and misses by inches. Question marks on the Hyderabad FC central-defence, which was caught napping.

50' | Sahal does well to lay off the ball for Jessel Carneiro on the left, who sends the ball flying. He should have tried for a cross there instead of going for goal. Kerala forwards and coach Kibu Vicuna are not pleased.

46' | Poor header from Victor off Kerala's set piece and it falls for Vicente, who goes for goal but Subrata dives to his left and catches hold of the ball.

The second half of Kerala Blasters vs Hyderabad FC gets underway with the former having a 1-0 lead. 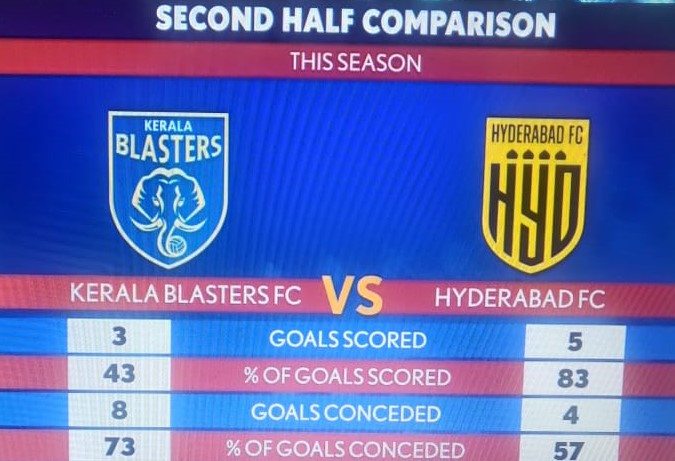 Hyderabad FC have had more possession and more shots - they have five shots compared to three from Kerala Blasters. 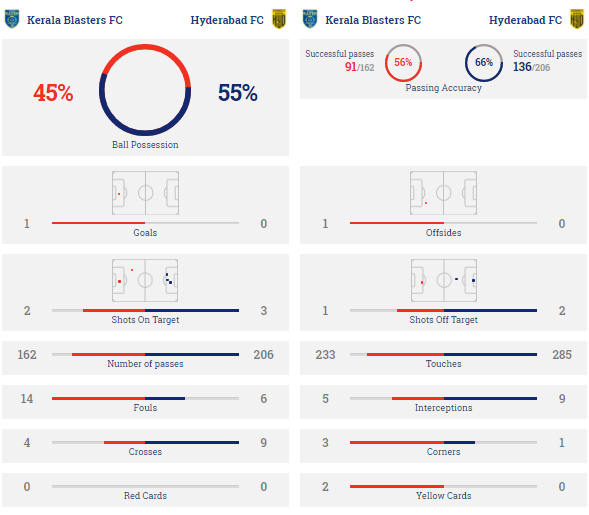 Abdul Hakku's goal is the difference between Kerala Blasters and Hyderabad FC are 45 minutes at the GMC Stadium in Bambolim, Goa. Kerala Blasters have that valuable 1-0 lead going into the break even as Aridane Santana had a golden chance to level it up for Hyderabad FC right before the break. Kerala have done well as a unit so far and will need to maintain that intensity in the second half as well.

That feeling for Abdul Hakku and Kerala Blasters!

45+2' | Good work from Sahal to get to the ball but he tries to do too much with it as he is hounded by the Hyderabad defence and the men in black and yellow are able to clear the ball.

45' | Excellent through ball from Victor to Asish, who puts in a wonderful ball for Aridane right in front of the goal but with Hakku on his back, Aridane fails to get the shot away with a brave Albino closing in to collect the ball. What a chance for Aridane! Big Miss!

Conceding goals has been an issue plaguing Kerala Blasters since the start of the season. Hyderabad will be aiming to expose Kerala's vulnerable defense, which has the second-worst defensive record this season. Defensively, Manuel Marquez's side has also been struggling as of late. Five of the six goals they conceded this season have come in the last three games. However, for that to mean anything, Kerala will have to uplift their attack as well. They have attempted just 54 shots in the season so far - the lowest by a team - and have also created the least chances per 90 minutes.

Kerala coach Kibu Vicuna expects his side to make improvements but knows they won't have it easy against Hyderabad. "Every game is difficult," said Vicuna. "Hyderabad had positives in the last match (against Mumbai). They didn't play bad but they lost. So yes, we are expecting a tough challenge but we are training well. We are improving and taking steps forward. I have confidence we are going to play a good match."

Hyderabad FC have been reliant on goals on Aridane Santana but Kerala have recorded six unique goal-scorers so far and Marquez said this game was not to be taken lightly. "They (Kerala) have very good players and maybe they deserve more points than they have. They have great players in all positions from the goalkeeper until the forwards and the coach (Vicuna) won the I-League last season. For sure, it will be an equal game. Let's see what happens."