ISL 2020-21 Highlights, Mumbai City FC vs NorthEast United FC: Adam Le Fondre has pulled one back for the league leaders.

NorthEast United FC have completed a league double over Mumbai City FC. A first-half brace from Deshorn Brown and some resilient defending helped the Highlanders beat the league leaders 2-1. With this win, they break into the top four and are level on points with third-placed FC Goa. This was also their third win on the trot. As for Mumbai, after being outplayed in the first quarter of the game, they found their way back after the first water break. They started creating chances and looked more threatening, however, could not break the NEUFC backline. In the second half, they continued with their possession play and created a few chances but lacked the killer pass in the final third. They did find one goal back, courtesy Adam Le Fondre, but it was too little too late for the Islanders.  Sadly for Mumbai, this defeat means they won't be able to better FC Goa's record of 12 games unbeaten.  Both these teams are tied on 12 games. Match number 76 of the Indian Super League season 7 was played at the GMC Stadium in Bambolim.

NorthEast United complete a league double over Mumbai City FC. With this win they move into the top-4.

89' | Jahouh plays a ball in for Le Fondre who gets his head to it but his header is off the target.

Mumbai Pull One Back

85' | Mumbai City FC pull one back and it is their top scorer Adam Le Fondre with the goal.

84' | Time is running out for Mumbai City FC to make a comeback into the game. Less than 6 minutes of normal time plus the added minutes.

79' | Chhara gets the ball on the right flank and his cross into the box is deflected by Mehtab Singh. Moments later, Rochharzela is on the ball again on the right side of the box. He loses his footing and falls and ends up tackling Mehtab Singh in the process.

78' | Deshorn Brown OUT, Idrissa Sylla IN

76' | Luis Machado gets the ball on the left side of the box. He is forced to shoot from his weaker left foot and his effort is blocked for a corner by Sarthak Golui. Federico Gallego's corner from the left side finds Benjamin Lambot at the near post. He tries to back-heal the ball into the back of the net but ends up side-netting it.

76' |  Hugo Boumous is lucky to escape a yellow there. He rattles into Subhasish after he gets the ball fair and square.

73' |  Sarthak Golui is the latest player to go into the refereee's book.

70' | That's the fifth free-kick that Mumbai have won on the same area however, they failed to make most of every time.

65' | Hugo Boumous earns a free-kick outside the NEUFC box as he slams into Luis Machado. The subsequent free-kick had no venom and was easily dealt with by Subhasish.

63' | Suhair VP is down and he looks in some discomfort, probably will get subbed now.

62'| Suhair VP after intercepting the ball, he races towards the MCFC box. Then he tries to find Gallego in the middle but his pass is not perfect, he ends up giving away the ball.

60' | Mumbai played their way into the NEUFC box and a pass was played for Ogbeche who just needed a proper touch and ball could have found the back of the net. But Benjamin Lambot was not taking any chances there as he executed a perfectly timed tackle inside the box.

56' | It has been a Khass(a) performance by Camara so far in the match. He has nullified the threat that Hugo Boumous brings.

55' | Ahmed Jahouh is booked by the referee for a tackle from behind. This means he'll miss Mumbai's next match

52' |  Ogbeche is the MCFC player to be booked tonight.

46' | What a start for NEUFC! The Highlanders almost increased their lead, Apui's long ranger is saved by Amrinder's fingertips.

46' | Action resumes. After an enthralling first half, a similar second 45 awaits us, hopefully! It'll be very unwise to take Mumbai lightly, also NEUFC have conceded 10 goals in the second half. Can Mumbai City FC find their way back? Or will NEUFC complete a league double over the Islanders? A record is also at stake for Mumbai tonight 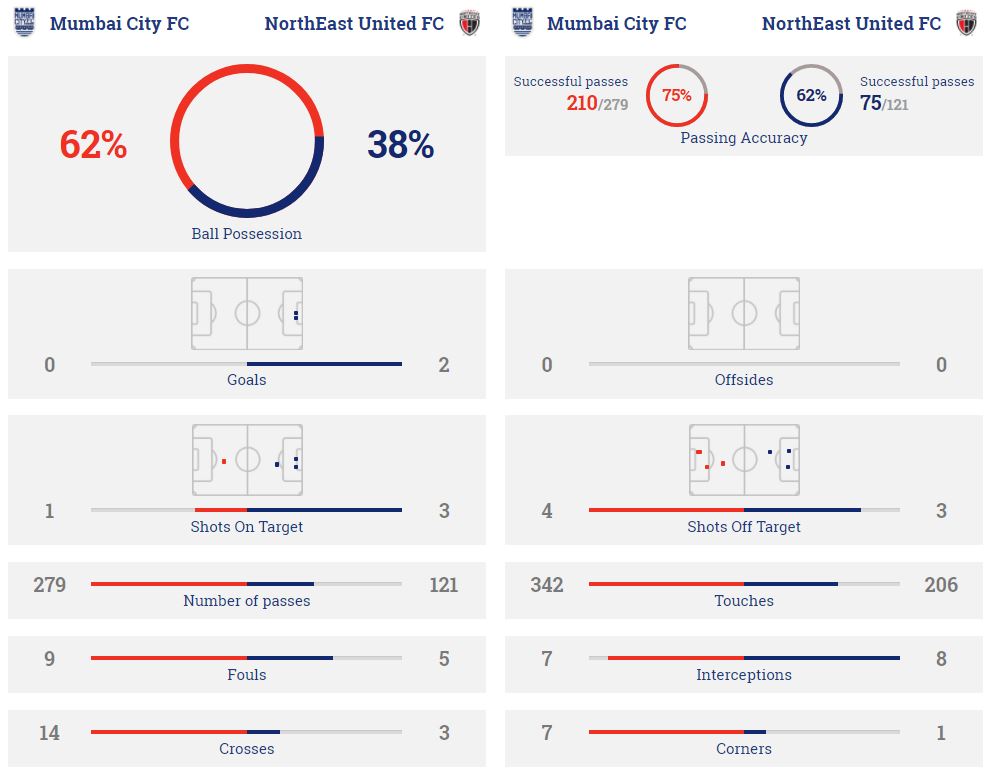 Well, no one expected this. Especially not the league leaders, Mumbai City FC. They looked out of place till the water break. after that they have slowly crawled back into the game have created more chances however they have been undone by some brilliant defending by NEUFC.

NorthEast United are ahead at the break thanks to a three-minute brace from Deshorn Brown.

44' Change for NorthEast! Camara does well to release Gallego, but the Uruguayan can't get the ball off his feet and the defence swoops in to clear the danger.

40' | Ranawade plays in a good weighted pass for Jahouh at the edge of the box and the Moroccan tries to curl it past the NEUFC custodian but Subhasish makes a good save. The deflection falls to Jackichand Singh on the right side of the box. His shot is deflected out for a corner by Provat Lakra. WHAT A SAVE BY Subhasish Roy! ISL 2020-21 Highlights, Mumbai City FC vs NorthEast United FC: Adam Le Fondre has pulled one back for the league leaders. Mumbai City FC worked their way into the NorthEast United FC box courtesy Hugo Boumous. He then played a pass to Ogbeche, NEUFC players were appealing for a handball but the referee was having none of it. The ball then fell for Le Fondre in the middle of the box and the Englishman volleyed it past a helpless Subhasish. Earlier, NEUFC stunned MCFC as they scored inside the first 10 minutes thanks to Deshorn Brown. Match number 76 of the Indian Super League season 7 is being played at the GMC Stadium in Bambolim.

Mumbai City are unbeaten in their last 12 games, having won nine and drawn thrice and are leading the table with 30 points. A win or a draw on Saturday at the GMC Stadium on Saturday will see Sergio Lobera's team better a feat that has been standing since 2015 in the name of FC Goa (12 unbeaten games).

However, Mumbai City have dropped points in the last three games. They were held twice and were able to score just two in those games and now face NorthEast, a side that inflicted the only defeat of the season on the league leaders. But Lobera seemed unconcerned.

"I am not worried about the past game. NorthEast have improved a lot in the last two games. They are playing good attacking football and are comfortable with the ball and keep possession," said Lobera.

"For us, this is going to be a different game. But we have improved from our first match of the competition but NorthEast also (has improved). It's not easy to play against NorthEast now. We have to go 100 percent if we want to win," he added.

Some of the Mumbai players are already on three yellow cards and are on the verge of suspensions but Lobera stressed the importance of a win. "We need three points every game and every match is important for us. We need to play thinking of three points," he said.

NorthEast United, on their part, seemed to have turned a corner under interim coach Khalid Jamil and are on a two-match winning run. At the same time, it has been seven games since they last maintained a clean sheet. Assistant coach Alison Kharsyntiew is aware of the threat that Mumbai City pose.

"Mumbai City are a good team. But we must believe that we can beat them tomorrow. We just have to be disciplined in our attacking and defending principles and be confident," said Kharsyntiew.

Mumbai City boast one of the best attacking line-ups while their defensive stats are impressive too. Lobera's men have scored the most (19 goals) and conceded the least (5) in the league. The side is capable of creating problems for their opponents.

"We need to dictate the play. We need to control the game and yes if we don't have the ball, we have to defend well. We have to be patient with the ball, create chances and utilize it and that's the main aim for us," Kharsyntiew said.