That's it from this game! And it remains goalless! A total of 17 shots are made in the game with 6 on target (both teams combined) but no goals. Chennaiyin end up with 56 per cent possession compared to 44 per cent for NorthEast United FC. Despite four shots from Chennaiyin on target, they were unable to find the back of the net and both teams share the spoils.

90+4' | Abhijit Sarkar comes on for Chhangte

Just as he comes on, the referee blows the final whistle.

89' | Rochharzela at it once again, he has been so lively ever since he has come on and has stretched the Chennaiyin defence. He cuts past two defenders and goes for goal but has hit shot blocked.

88' | Another beautoful ball from Rochharzela towards the right of goal for Britto but it is just a little bit ahead.

86' | It has been extremely tight in the second half with both teams struggling to find clear cut chances. Less than five minutes are left in the game and it is still goalless.

66' | Stunning through ball from Roccharzela from far behind for Idrissa Sylla but he just can't get his shot on target. What a chance for NorthEast! That should have been 1-0 in their favour.

56' | Rochharzela comes on in place of Suhair VP.

60' | Good play in the final third from Chennaiyin! Fatkhullo and Vanspaul connect well on the right flank and pass the ball to Sylvestr in the middle, who lays it off for Chhangte but the Indians balloons his shot.

58' | Idrissa Sylla stays onside but a good ball over the top but Kaith does well to shield it out to get a goal kick.

47' | A good through ball from Chhangte for Jakib Sylvestr as the striker makes a good diagonal turn to get to the ball but he shoots into the side net.

SECOND HALF KICKS OFF!

The second half between NorthEast United FC and Chennaiyin FC kicks off at the Tilak Maidan. The scoreline is still 0-0 even as both the teams played a very lively game.

Chennaiyin FC and NorthEast United FC played out a lively first 45 minutes at the Tilak Maidan with both teams pressing for goals and creating a few chances but none could find the back of the net. The pace of the game has been top notch and it will surely be an interesting second half too.

It has been quite an even game so far! 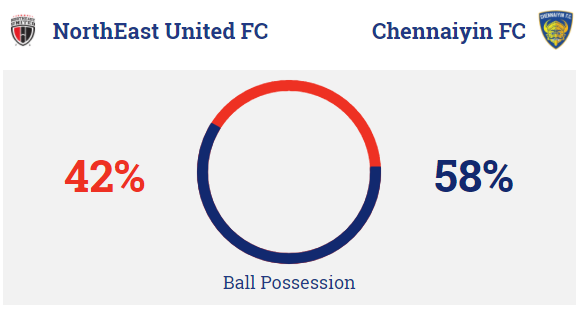 38' | Chennaiyin are somehow able to keep NorthEast at bay. First with Sylla trying to create space but unable to get the shot away. Then with Machado's shot blocked and then Ninthoi's run up thwarted out for a corner.

27' | Ninthoi bursts ahead on the right as a cross comes his way and Jerry is caught sleeping. Good keeping from Vishal Kaith, however, as he catches hold of the ball.

25' | Good tussle between Sylla and Jerry and the referee allows the action to flow. Jerry's ball, however, is dealt with by the NorthEast defence.

20' | Chhangte with some super skills on the left as he wriggles away from Ashutosh and tries to tee it up in the middle but there are enough NorthEast men in the box to handle it as Khassa Camara clears it away.

16' | Really high energy match going on at the Tilak Maidan. Good interplay between Sylla, Machado and Suhair and the latter goes for a goal, gets a deflection and earns NorthEast United their fourth corner. The corner is sent out wide and it is sent back in for Lambot, who connects with it poorly but it hits the arm of a Chennaiyin FC (as we see in replays) but the referee waives it off.

13' | Really good work by Suhair VP to turn away from his man Deepak Tangri and pace up. He chose to pass out wide to the left and Chennaiyin are able to clear it out for a corner. Off the set piece, Dylan Fox gets his header over.

12' | Now, NorthEast United with a little bit of a push and they have their second corner and nothing really comes out it.

7' | Germanpreet puts in a good ball from the right into the middle but a slight deflection and it's just a little bit closer to Gurmeet than desired. And the NorthEast United FC keeper collects the ball.

5' | Great ball whipped in from the left towards the middle by Jerry Lalrinzuala but Benjamin Lambot gets to it and sends it for a corner. Chennaiyin get another chance from the corner but the shot goes wide.

2' | Chennaiyin FC have an early chance with Chhangte pulling the trigger from the left but Gurmeet gets his hand to it. Right after that, NorthEast had a good chance as Ninthoi put in a stunning cross in the centre from the right but it went just ahead of Sylla.

Chennaiyin FC get us underway at the Tilak Maidan in what is the first match of the double-header Sunday! NorthEast United FC are looking to stay unbeaten and get their third win of the season while Chennaiyin are looking for their second victory.

The players have made it to the field and we will first have the national anthem and then the action will kick off.

That would have been an interesting battle but Rafael Crivellaro is starting on the bench.

Rafael Crivellaro's 9️⃣ shots - Most by a @ChennaiyinFC player this season 🎯

Anirudh Thapa is back in the matchday squad. Youngsters Abhijit and Aman make the squad as well.

ISL 2020-21 Highlights, NorthEast United FC vs Chennaiyin FC:  NorthEast United FC remain unbeaten as they play out a 0-0 draw with Chennaiyin FC at the Tilak Maidan in Vasco, Goa in Match No.26 of the Indian Super League (ISL) 2020-21 on Sunday. Chennaiyin had four shots on target while NorthEast had two but none could find the goal. Rochharzela came on the pitch in the second half and was extremely lively and created chances but none could apply the finishing touches to his moves. The game saw end-to-end action right from the start and in the end, both teams go away with a point each. Apuia lead the NorthEast United FC team once again while Ninthoi returned to starting XI. For Chennaiyin FC, Anirudh Thapa was fit enough to make back to the matchday squad. NorthEast United FC. Yesterday, FC Goa produced a dominant performance against Odisha FC but due to Arshdeep Singh's heroics could only get a 1-0 win. Now, you can head out to the next game between former champions Bengaluru FC and two-time finalists Kerala Blasters.

Both NorthEast United and Chennaiyin have faced each other 12 times in the short history of the league. Gerard Nus' side hold the upper hand, winning six times while drawing thrice. This is their best win record against any opposition in the Indian Super League and they will be aiming to continue that. Chennaiyin, after back to back defeats, have only accumulated four points from as many games. But there have been plenty of positives for the two-time winners, who have constantly proved a threat for all their opponents.

Nus expects Chennaiyin FC to bounce back following their defeat to Mumbai City FC, where they remained alive in the game until the final whistle. "Chennaiyin is going to be a competitive team," said Nus. "We've seen the way they fight. In the last game (against Mumbai City), they didn't get the result but they created chances and were dangerous. We expect a side that is going to come against us with commitment, aggressiveness and intensity. We have to be ready for it. We have to be focused for 90 minutes. This is something we need to do with consistency."

Northeast United are the joint-highest scorers so far this season (8). In defense, the Highlanders have also made it difficult for opponents to break them down, keeping two clean sheets. Chennaiyin coach Csaba Laszlo is aware of the threat posed by the Guwahati-based side but despite a few injury concerns, he expects his team to put up a tough challenge. "NorthEast have had a very good start. They are a stable team. In offense, they have new players who have performed well. Generally, it's a team that can score goals against every opponent. They have been dangerous. We must be prepared for this. At the same time, I believe in my team. We have our own style and strengths, which we want to use against them."