ISL 2020-21 HIGHLIGHTS, Odisha FC vs Kerala Blasters: Kerala Blasters had far more shots on target but only two found the back of the net and they could only get a draw with Odisha. With the draw, Kerala Blasters' hopes of making it to the playoffs ended. Full Time:- OFC 2-2 KBFC

Kerala Blasters move up a place with a point from this draw while Odisha FC remain at the last spot. 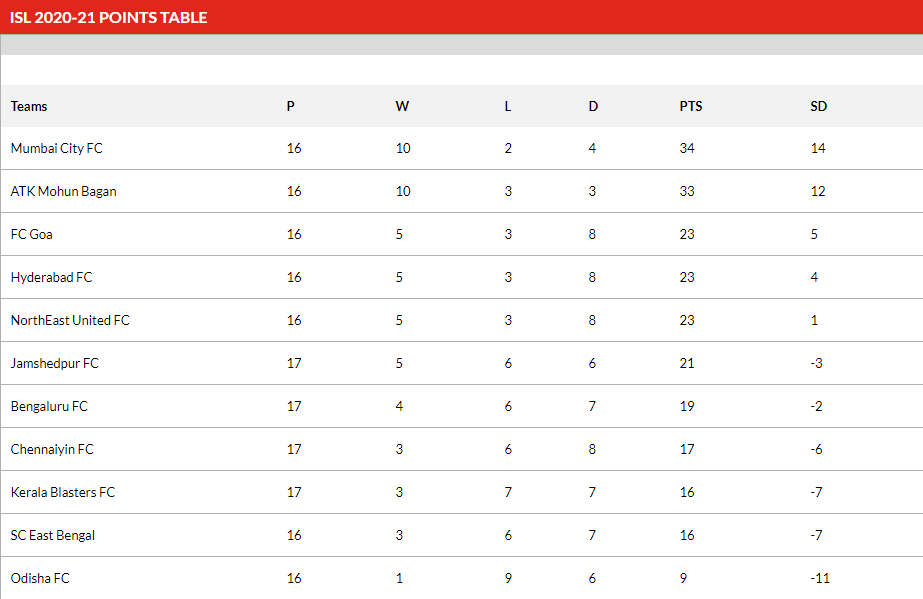 "Relieved is not the word I will use. My team was very motivated from the start. We knew what they were going to do, they were going to come down the flanks. We blocked them there. I am very impressed with Inman today, his linking with Mauricio. I am disappointed we didn't win, I'll be honest with you.

"I'm not going to kid and say they are not a talented team, they've got good players. We set out to stop them. They had chances but they missed them. We had chances to win as well. I am very happy with my players and we almost came out with a win."

"I am disappointed. We were much better than our opponents. We created too many chances. The problem is we can't concede two goals every match. That is the problem. This has been our problem the whole season. It's unbelievable we didn't win tonight. The different between the chances we created and theirs is very high. This is clearly not our season.

"Jeakson is a player who can play in both positions. If we conceded due to Jeakson is not the topic. I think he is doing well and he can be important for Indian football. If he played in central defence, he can play there. Of course, he is better as a central midfielder.

"Sometimes because of injuries and sometimes because we think we can do better, we continue working and make changes. We are working very hard in training on our defensive work. We have a good attack but we are working on the balance. We can only continue working and try and correct the mistakes we commit in the matches. We have to try and score more goals as well considering the number of chances we create.

"I think at the end of the season, it is going to be more easy to analyse why. Sometimes I feel in some games we are not killing the match, like today. I also feel it's a mental situation. In football, you know you are in good way and we are not. The confidence of the players when we score or concede is not the same. Management of the game is also to be worked on."

"We have three games, hopefully we can get nine points from them.

"We came out with a little bit more oomph and put it in Odisha's face. But we scored and missed and they got two goals as well. It's disappointing to not get the three points.

It's been hard to not have the fans. I have heard stories and it's been tough. But it's about pride. And hopefully we can win the next few games and personally I can get a few more goals."

Hero of the Match Diego Mauricio After the Game

"I am happy to be the top scorer for the team. The team being in the last position is not good. But we have games left and we have good character. We focus on the next game against NorthEast.

"I am very happy with the nine goals. My friend in the team have helped me. I want to score more and help my team win."

Kerala Blasters had six more shots on target than Odisha FC. However, both teams scored two goals each and played out a draw. And that's it from the Fatorda! An exciting second half that saw three of the four goals being scored. Odisha had taken the lead just before half time but KBFC came out with intent in the second half and Jordan Murray and Gary Hooper scored to give Kerala Blasters the lead. However, Diego Mauricio scored his second of the night to equalise for Odisha. Towards the end, Albino Gomes denied Bradden Inman and Arshdeep Singh denied Costa Nhamoinesu as the scoreline remained level.

90+1' | Nice little cushioned header from Murray from the free kick and Costa gets his header on target and that's a big, big save from Arshdeep.

89' | Beautiful ball for Premjit on the right and he is clear. Acute angle, he puts the ball in the middle for Inman, whose shot at goal is palmed out by Albino Gomes from point blank range.

87' | Brilliant flick from Mauricio for Inman on the left and then he times his run to perfection in order to get to the cross but Costa makes a vital clearance. Off the corner, Tratt heads it just over from a brilliant corner kick.

90+2' | Jessel Carneiro comes on for Denechandra.

79' | Terrible from Prasanth who just can't get around the headed pass from Costa and Daniel steals the ball but his shot is way over.

74' | Diego Maurcio taps it home off a good Inman assist. A pass up the field for Inman from Vinit. Inman puts in a good ball in the middle that Mauricio taps in. Horrible defending from Kerala as he literally walks in between that defence and is left unmarked by everyone.

73' | Odisha FC are falling apart at the moment and Kerala Blasters have been finding a lot of joy in the Odisha half since the start of the second half. They, however, have to get more goals gives their history of dropping points from winning positions.

68' - GOAL! Gary Hooper puts Kerala Blasters 2-1 lead. A good cross from the midfield for Sahal close to the box. Sahal does well to turnaround and play Hooper on the left, who slots the ball home.

Sahal plays in Hooper who plays it perfectly in the right bottom corner! 💪#OFCKBFC #YennumYellow pic.twitter.com/DqUYl45ltq

62' | Rahul KP is in a good position and goes for goal. Jordan Murray had left off his defender and was in a hole in front of the goal. Rahul should have passed to Murray there.

60' | Murray comes from behind Vinit and wins the ball and the Odisha midfielder ends up catching the man. It's a free kick for the Blasters.

52' | Jordan Murray equalises for Kerala Blasters off a superb Gary Hooper assist. Hooper did extremely well to get past an onrushing Arshdeep and put in a ball in the middle. Murray got to it before Sajid reacted and slotted it home.

Hooper pounces on a backpass, squares it for Murray who bangs the equalizer in! 💪#OFCKBFC #YennumYellow pic.twitter.com/HheT1jSanD

51' | Daniel comes on for Rakesh Pradhan.

78' | Shubham Sarangi comes on for Antonay.

Odisha FC kick off the second half at the Fatorda. Odisha lead 1-0 courtesy a Diego Mauricio goal.

Odisha FC had one shot on target in the whole first half and they scored off that! 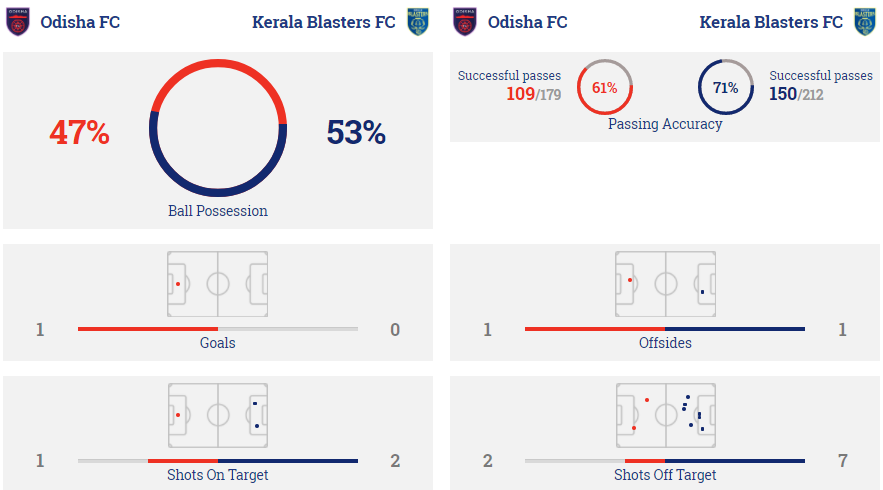 Kerala Blasters have a couple of big opportunities but their indecisiveness and no cutting-edge in front of goal was punished when Diego Mauricio scored against the run of play just before half time. Juande had missed an open goal, which could have swung the momentum in favour of Kerala. And then, just as we moved into first half stoppage time, Jerry Mawihmingthanga put in a stunning chip from the middle for Diego Mauricio, who got in between the defenders and slotted it home.

A goal late on in the first half has us trailing at the break.#OFCKBFC #YennumYellow pic.twitter.com/7mtiw5GJqB

44' | A huge chance for Odisha goes begging. Brilliant one-touch football near the penalty area but the final shot on goal is just cleared by Kerala. Brilliant chance, chance of the game so far!

39' | What brilliant display of skill from Rahul KP to fool and get past Antonay but his pass is not sharp enough and is put out for a corner by Vinit Rai.

37' | After a Kerala Blasters attempt, Odisha launch a counter and Jerry gets into a good position on the right flank but can't get his pass right.

34' | Arshdeep gifts the ball to Gary Hooper, who does well to take it up and draw defenders to himself on the near post and unselfishly passes it back in the middle. Juande gets to it but misses an open goal. Huge let down!

31' | Taylor loses the ball to Sahal under pressure from Hooper. Sahal does well to pass the ball for Hooper, who creates a good yard or two for himself but can't get his shot on target.

29' | Lovely little work from Mauricio, who lays the ball for Inman and continues his run up. Inman with a good chip for him but Albino Gomes comes forward and collects the ball. Good goalkeeping!

27' | Kerala Blasters are yet to hit the target. They have been unable to create any clear-cut chances in a match that is do-or-die for them,

ISL 2020-21 Odisha FC vs Kerala Blasters HIGHLIGHTS: Kerala Blasters draw with Odisha FC 2-2 in the Indian Super League (ISL) 2020-21 during Match No.90 at the Fatorda Stadium on Thursday. Kerala Blasters kickstart the game vs Odisha. Kerala Blasters had far more shots on target but only two found the back of the net and they could only get a draw with Odisha. With the draw, Kerala Blasters' hopes of making it to the playoffs ended. Arshdeep makes a big save against Costa's header. Albino Denies Bradden Inman from point blank range. Diego Mauricio is left unmarked in the Kerala box and he slots it home off an Inman assist. Gary Hooper with a solid finish to put Kerala Blasters 2-1 up. Jordan Murray displays his predatory skills to get to the end of a ball from Gary Hooper, who did extremely well to take out Arshdeep. Just a couple of minutes after missing a huge chance, Odisha get the lead. Diego Mauricio finds the back of the net off a brilliant ball from Jerry Mawihmingthanga. Juande misses an open goal after Albino gifted the ball to Hooper. Gary Hooper shoots it way wide after getting into a good position. Albino thwarts danger from Mauricio following Inman's good chip for the striker. Odisha FC have made a couple of inroads but Kerala Blasters are yet to create anything of note so far.

Odisha FC and Kerala Blasters last played on January 7, where Odisha came out victorious 4-2. It was a Diego Mauricio brace that took Odisha to the victory. Jordan Murray had got Kerala on board first in the seventh minute but then began their downhill. Jeakson scored an own goal in the 22nd minute and then Steven Taylor scored Odisha's second in the 42nd. Mauricio then scored two within 10 minutes to put Odisha up with four goals. Hooper got another back in the 79th minute but he couldn't get KBFC close to Odisha.

Odisha coach Gerald Peyton is aware that Kerala will be fighting for all that they have but he will take confidence from their record against the southern outfit. In their three meetings so far, Kerala have never beaten Odisha. "I think they've got some good players.," he said. "Tactically, we know how they play and will match them in every area. They play a 4-4-2 and we are going to play the same way. We are going to make it difficult for them and I think we can do the double over them."

Making the playoffs appears an uphill task but Kerala Blasters coach Kibu Vicuna hasn't given up hope. "Our objective is to get 12 points (from our remaining four matches) but we will take it step-by-step," he said. "Tomorrow is an opportunity to get the points and be closer to the teams that have better chances of qualifying for the playoffs."