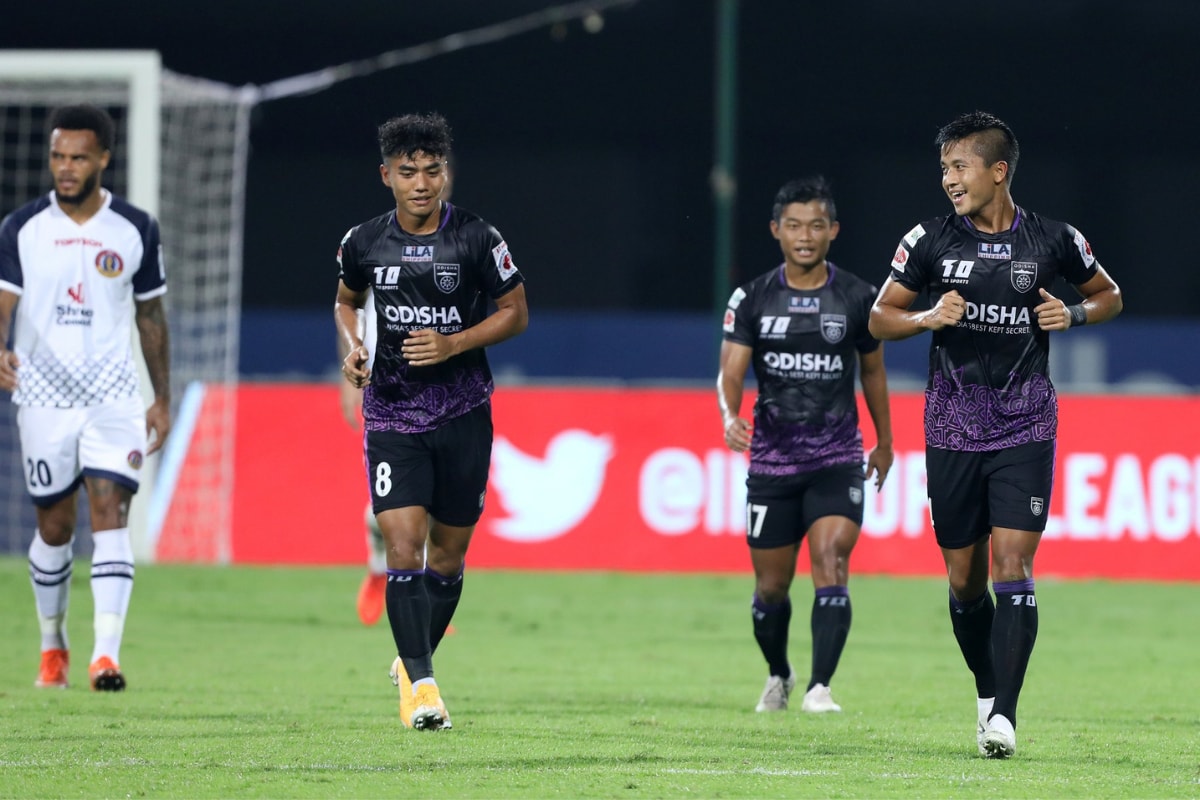 Holloway pulls another back for SC East Bengal!

Jeje comes on and pulls one back for SC East Bengal.

Diego Mauricio also gets one! It is 6-3 in favour of Odisha now!

Jerry scores his second of the match! Odisha now lead 5-3!

JERRY WITH A DELIGHTFUL HEADER GIVES US THE LEAD AFTER ONWU DELIVERS A DELICIOUS BALL IN!!!!!!!! 🔥🔥🔥🔥#OdishaFC #AmaTeamAmaGame #HeroISL pic.twitter.com/dfnRkMKvab

Finally a goal! Aaron Joshua Holloway level it up for SC East Bengal!

Aaron recieves teh ball on the left fank and steps past gets away from the OFC defender and takes a shot to score his first goal of the season.

Jerry Mawihmingthanga! Indians scoring all the goals for Odisha!

Jacob Tratt's free-kick is defelcted out put recycled back in through the left flank. Manuel Onwu wrestles past Surchandra Singh and passes it on for Jerry, who makes no mistake to slot it in into back of the net.

Another Indian goal scorer for Odisha! Paul Ramfangzauva makes it 2-2!

George D'souza's throw-in finds Bradden Inman on the right flank as he passes it on for Paul just outside the box. He takes a precise shot as Subrata has no chance to save that.

Another loss for Odisha FC and SC East Bengal complete the double?

The second 45 will decide that! Anthony Pilkington and an own goal mean SC East Bengal lead 2-1 at the break as Lalhrezuala had equalised for Odisha FC.

SC East Bengal are back in the lead! Manuel Onwu shot hit the goalkeeper Ravi Kumar and rolls into the net. Own Goal!

Odisha FC are level! Finally, an Indian goal scorer as Lalhrezuala make it 1-1!

Bradden Inman's corner is not dealt well by Jacques Maghoma and the ball rolls to Lalhrezuala gets it in the middle of the six-yard box. He smashes it past a helpless Subrata Paul!

As SC East Bengal and Odisha FC players take a water break, have a look at the one that went in...

Pilkington got the ball on the right flank just outside the box and he cut inside into the penalty area and takes a shot. The ball soars past a diving Ravi Kumar in the Odisha goal to break the deadlock.

What a ball in the middle from Surchandra Singh. It is just inches away from Aaron Amadi-Holloway. Odisha FC sigh relief!

A cagey start to the game as either team - SCEB and OFC - is yet to take a hold of the game.

Both teams have started 'brightly' but SC East Bengal look the team in command with Enobakhare bossing the Odisha FC defence.

SC East Bengal and Odisha FC are facing off in their last match of the season with only pride at stake.

Who will walk away with the win for the last time this campaign?

Nine changes for SC East Bengal and 5 changes for Odisha FC from their last outing in the ISL.

SC East Bengal beat Odisha FC in their previous encounter this campaign and will be eyeing the double as they look to end their season on a high.

Odisha FC will also be hoping for a positive result.

If they fail to secure a win, Odisha FC will go down as the only club to end a ISL campaign with just one victory. They have conceded 39 goals so far and if they concede one more, Odisha FC will become the first team to concede 40 goals during the league stage. Another defeat will also see them match the 2018-19 Chennaiyin FC team in terms of points won (9) as well as defeats suffered (13) – both of which will be the joint-worst.

Here's how we start against @OdishaFC tonight. 👇 Hello and welcome to the live blog of match number 108 as SC East Bengal and Odisha FC play just for pride in their last match of the campaign at the GMC Stadium in Bambolim. ISL 2020-21 Highlights, Odisha FC vs SC East Bengal: Anthony Pilkington scored in the 24th minute, an own goal from Ravi Kumar in the 37th minute, Jeje Lalpekhlua netted one in the 74th and Aaron Joshua Holloway scored in the 60th and 90th minute for SC East Bengal but Lalhrezuala cancelled out the opener in the 33rd minute as Paul and Jerry scored in the 49th and 51st and then again in the 66th and 67th minute as Diego Mauricio scored another in the 69th minute to hand Odisha FC the lead in their last Indian Super League (ISL) 2020-21 match at the GMC Stadium in Bambolim on Saturday.

Story of the match:

After a quiet start to the match by both teams, it was Pilkington who opened the scoring for SC East Bengal with a brilliant finish in the 24th minute. The midfielder received the ball on the right flank and broke into the attacking third before firing his shot into the bottom left corner of the net.

Odisha FC weren’t behind for too long though, levelling the score in the 33rd minute. After SC East Bengal were unable to clear their lines from a corner, young full-back S Lalhrezuala managed to get a shot on target which crept through the goalkeeper’s legs for the equalising goal.

Pilkington then forced the Odisha FC goalkeeper Ravi Kumar into a save in the 36th minute but the latter was unfortunate to concede an own goal from the ensuing corner. SC East Bengal took a short corner and after receiving the ball on the right, Jacques Maghoma’s low cross across the goal was met by Aaron Joshua Holloway. His shot was intercepted by Manuel Onwu, whose attempted clearance ricocheted off the goalkeeper and went into the goal.

After their second goal, SC East Bengal were in control for the remainder of the first half. Three minutes after they scored their second goal, a tame Pilkington effort was easily saved by Ravi. However, Odisha struggled to get going at the other end of the pitch as they went into the break trailing by a goal.

Odisha FC came back into the game just four minutes after the restart. Paul Ramfangzauva received the ball from Bradden Inman and fired a shot from outside the box to beat Subrata Paul.

A couple of minutes later, they took the lead after Onwu won the ball from Surchandra Singh and crossed it into the danger zone. Jerry Mawihmingthanga did the rest as he headed the cross towards goal and saw it brush off the woodwork before heading into the net.

However, their lead did not last for long. On the hour mark, Holloway shrugged off his marker and attempted a shot on goal which hit the inside of the post and went into the net for SC East Bengal’s third goal of the game.

With the score at 3-3, Odisha FC upped the ante and turned the tables on their opponents. The Bhubaneswar-based club scored thrice in four minutes, with both Paul and Jerry bagging braces for their team.

In the 66th minute, Paul collected the ball after Rana Gharami blocked Vinit Rai’s shot. The 21-year-old midfielder’s shot from distance went on to beat the goalkeeper and head into the net. Moments later, Jerry smashed a lobbed pass into the box by Diego Mauricio to make it 5-3 for Odisha FC.

Mauricio turned from provider to goal-scorer after scoring a beautiful freekick in the 69th minute. The Brazilian attacker took a low shot which went underneath the SC East Bengal wall for Odisha FC’s sixth goal of the match.

SC East Bengal though went down fighting as Jeje Lalpekhlua scored the 10th goal of the match, and his team’s fourth, from close range. Bright Enobakhare’s pass to Pilkington was played onto the path of the Indian striker, who did well to head the ball into the net for his first goal of the season.

The Red and Gold Brigade reduced the deficit to just one goal in injury time. Holloway scored his second goal of the game after his header from a Daniel Fox flick on found the back of the net. However, it was a little too late for Robbie Fowler’s men as Odisha FC hung on for their second win of the season.

Robbie Fowler: “I disagree with it being a disappointing season. We would have liked things to have been better. There were individual errors and we let ourselves down. The less said about the second half the better. Every shot they had gone in. We knew it was a big job before the start of the season. Expectations were a bit higher than what we envisaged. [On six months before next season?] We can prepare for next season now. We didn’t have enough time for this season. We have a few months to get things in shape. [How have his Indian players improved this season] I don’t know if you are after a comment from me. At times they have been left wanting. Attitude and desire need to be improved. We have a lot of things gone against us this year. If you are honest people don’t like it here. It’s better to keep it quiet.”