And that's it, it's full time and none could break the deadlock. With the draw, SC East Bengal earn their first points of the season. SC East Bengal, who played with 10 men for most part of the match, hold Jamshedpur FC to a 0-0 draw. Jamshedpur FC went down to 10 men in the 92nd minute after Dinliana was sent off. Jamshedpur had a number of chances, hit the bar twice, got themselves in good positions but lacked the killer edge.

90+1' | Now Jamshedpur FC are also down to 10 men as Dinliana is sent off after receiving a second yellow card. A harsh one that too.

90' | With no decisive play in the final third from Jamshedpur FC, it looks like this is going to remain goalless. Also, Aitor Monroy gets cautioned for bringing down Jacques Maghoma.

82' | Valskis is now getting frustrated. He is arguing with his own teammates as Jamshedpur FC have been unable to break the deadlock against 10-man East Bengal.

70' | Excellent movement from Jamshedpur! Jackichand receives the ball on the right from an overlap movement and then puts in a cross at the far post. Isaac receives and controls it well and goes for goal but his shot is inches wide.

69' | OFF THE BAR! Alex Lima with a shot from distance and it hits the top of the crossbar. Jamshedpur FC get close once again but not enought to shake the scoreline.

63' | Two poor crosses from Dinliana and the disappointment is clearly written on his face and Owen Coyle's as well. Jamshedpur are trying to make their advantage count here.

58' | Dinliana goes into the referee's books now. He just came across the East Bengal player and obstructed his path and that seems a harsh yellow card.

PENALTY NOT GIVEN FOR JAMSHEDPUR

55' | No penalty given for Jamshedpur FC! William's ball hits the arm of an East Bengal defender as he went down to the floor but the referee choses not to give a penalty.

47' | Isaac with a lovely cross in the middle and Narayan Das jumps the highest to clear it away. Jamshedpur will be looking to take the game to opposition here with a man advantage.

At half time, East Bengal replace Jeje Lalpekhlua with Wahengbam Luwang while Isaac comes on for Aniket Jadhav! And with that the second half kicks off.

Isaac Vanmalsawma is warming up and is likely to be Jamshedpur FC's half time substitution.

Here are the statistics from SC East Bengal vs Jamshedpur FC. Jamshedpur are ahead of the home team in all the categories. 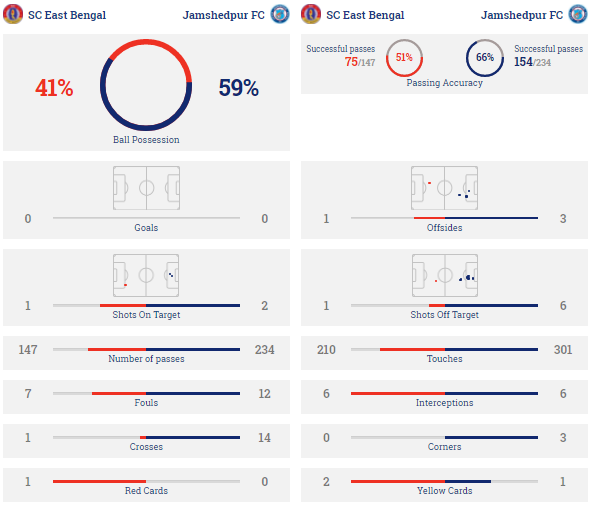 After three minutes of added time, it remains goalless at SC East Bengal vs Jamshedpur FC. East Bengal have a man less on the field with Eugeneson Lyngdoh sent off but Jamshedpur have been unable to make the advantage count so far. It will be interesting to see if they can in the second half. Jamshedpur FC had a couple of really close chances with Stephen Eze even hitting the bar.

41' | Pawan Kumar makes a regular save as Nerijus Valskis heads at the goal from a Jamshedpur set piece.

38' | OFF THE BAR! Stephen Eze's header from a Jamshedpur corner hits the post and bounces out. Unlucky that for Jamshedpur. Another close chance for them but the scoreline stays unchanged.

34' | This has been an open game so far with both teams pushing on for goals. Jeje Lalpekhlua looks lively up front for SC East Bengal. Also, an East Bengal gets cautioned by the referee.

29' | CLOSE! Good interplay between Mobashir and Dinliana on the right flank and Valskis receives the ball in the middle. The Lithuanian goes for a first time volley and it's just wide.

25' | SC East Bengal go down to 10 men after Eugeneson Lyngdoh gets a second yellow card. He makes contact with the ball and then catches the man but the referee deems it a yellow offence and he has to go off. That's harsh from the referee and a telling blow for the host team.

25' Eugene Lyngdoh receives marching orders, after getting 2 yellow cards in the space of 4 mins.😓#SCEBJFC #ChhilamAchiThakbo #WeAreSCEB

20' | Now, SC East Bengal Eugeneson Lyngdoh is shown the yellow card for bringing down Dinliana. A player each of both teams now have a booking.

16' | Jamshedpur on the break and William receives a good ball on the right of the goal but a slightly heavy touch from him meant Mohammed Rafique could get a sliding tackle in to protect East Bengal.

10' | Aniket Jadhav gets himself into the referee's books so early in the match and SC East Bengal have a free kick. However, Jamshedpur clear the ball easily.

8' | William is posing a lot of problems for the East Bengal defence on the right flank with his speed. There is a lot of pressure on the defensive line of the Red and Gold at the moment.

5' | Brilliant chance for Aniket! He gets a beautiful through ball from William and keeps himself onside but is unable to maintain the composure and shoots it over.

2' | Jamshedpur FC create an early chance for themselves with a free kick and a shot is deflected out for a corner. However, SC East Bengal are able to clear their lines.

Jamshedpur FC get us underway in SC East Bengal's home game at the Tilak Maidan in Vasco, Goa.

This is likely to be a stern test for Robbie Fowler, who needs a win for his East Bengal team to get them going. Owen Coyle, who feels refereeing decisions have continuously gone against Jamshedpur FC, is also looking for a second win on the trot.

SC East Bengal are rooted at the foot of the table as they are yet to open their account after three losses in all the three games. Jamshedpur FC have won one, drawn two and lost one to have five points in the pocket. Mumbai City FC are the table toppers with four wins from five games, accounting for 12 points. Liverpool legend and East Bengal coach Robbie Fowler is under pressure after three straight losses that leaves his team rooted at the bottom of the ISL 2020-21 points table. East Bengal are currently the only side yet to open their account in the 11-team top-tier league. The Owen Coyle-coached Jamshedpur FC, on the other hand, would be high on confidence after their one-sided win over ATK Mohun Bagan, who were unbeaten till they played them.

Lacking a quality striker upfront, SC East Bengal’s backline too has been badly exposed of late, especially after injury to their captain and defensive mainstay Danny Fox. Up against the Red Miners, boasting last season’s Golden Ball winner Nerijus Valskis, Fowler’s shaky defence will be further tested. “It’s not going to be an easy game as no game in this tournament is supposed to be easy. We have a lot of quality in the side; we just need to take our chances. We need to convert chances and defend well,” SC East Bengal’s midfielder Jacques Maghoma said.