ATK Mohun Bagan into the Indian Super League final for the first time!!!

ATK Mohun Bagan's Jayesh Rane is on for David Williams.

ATK Mohun Bagan's Javier Hernandez comes off and in his place comes on Prabir Das!

The Highlander skies the spot kick!

VP Suhair gets one back for NEUFC!

Mistake from Arindam Bhattacharja. The ATKMB keeper punches the looping ball onto the bar and it falls to Suahir, whose diving header goes into the back of the net.

We have a gome on now!

Deshorn Brown is brought on in place for Federico Gallego.

The Indian forward for Mariners finishes off the lighting fast counter-attack. What a finish from Manvir!

Brilliant play from ATKMB as Manvir Singh gets the ball on the right flank and he cuts back to find Roy Krishna. who in turn passes it through for Javier Hernandez. His sht just hits the side netting.

Benjamin Lambot comes on in place of Dylan Fox. Like-for-like!

What happened there?! Roy Krishna almost scores for ATKMB as it is cleared off the line!

Ashutosh Mehta is back there to make the save for NEUFC! 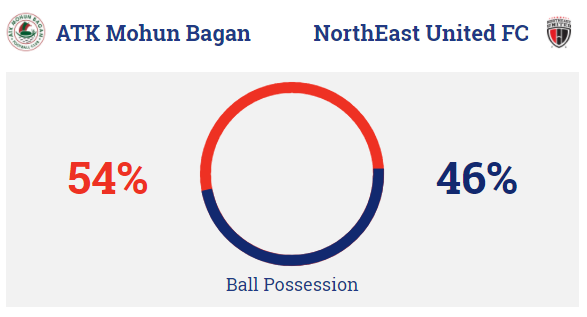 Roy Krishna tries to get to the ball from a long pass out from back but Mashoor Shereef is there first and gets his boots through the ball. He is not taking any chances with the mercurial forward lurking.

NorthEast United FC start the second half in attacking fashion!

Federico Gallego plays in a low crass and VP Suhair gets a shot off which is tipped onto the post from Arindam Bhattacharja. Whata start to the 2nd 45!

ATKMB and NEUFC get back underway for the second 45!

ATKMB have been attacking from the first minute itself and looked the team to get the first goal of the game. 16 shots in the first half and 3 on target!

NEUFC have worked the opposition keeper but haven't been convincing enough.

It's that man again! Roy Krishna findsthe ball at his feet andsends Williams through down the centre. A perfectly timed run and cool finish from David Williams mean it is the Mariners who lead.

Mashoor Shereef's hand hit David Williams and the ATKMB forward is down on the ground. The referee pulls out the yellow card for the first booking of the match.

Nothing comes though from the resulting free-kick near the edge of the penalty box.

NortheEast United FC's Idrissa Sylla heads the ball to Luis Machado who takes a shot from the left. The shot is ferocious and is dipping as ATKMB keeper Arindam Bhattacharja makes a fingertip save!

Federico Gallego steps away a few challenges and plays cross-field pass to Luis Machado, who tries to collect it on the left flank, but the ball gets away from him and the ATKMB get a throw-in.

19' - What a chance for Lenny Rodrigues! That took some time as NorthEast United FC managed their first shot on attack. ATK Mohun Bagan have managed to keep the opposition at bay quite comfortably.

ATKMB have tried 9 shots in the opening 10 minutes! NorthEast United FC have spent much of that time in their own half.

ATKMB are giving it their all in the opening exchanges...  Carl McHugh takes a long-range shit, attempting to curl it into the corner as NEUFC's Mashoor Shereef heads it away.

After David Williams' warning shit that flew just over the bar from kick-off, Javier Hernandez struck one sweetly in the 3rd minute that rattled the goal post! ISL 2020-21 Semi-final HIGHLIGHTS, ATK Mohun Bagan vs NorthEast United FC Latest Updates: ATK Mohun Bagan are through to final as David Williams scored in the 38th minute and Manvir Singh doubled the lead in the 68th as VP Suhair pulled one back in the 74th minute for NorthEast United FC but Luis Machado missed a penalty in the second leg of their playoffs of the Indian Super League they were on level terms after their first leg. ATKMB will face Mumbai City FC in the ISL 2020-21 Final.

Mumbai City FC defeated FC Goa 6-5 via penalty shootout to make the final of ISL 2020-21 at the GMC Stadium in Bambolim, Goa on Monday. Rowllin Borges was the hero for MCFC as he scored the winning penalty.

The green and maroon brigade won the two-leg play-offs by 3-2 aggregate, meaning they have qualified for the AFC Cup Group Stages after finishing second in the league and qualifying for the final. Their opponents in the final, Mumbai City FC, have sealed the Asian Champions League spot. David Williams (38′) continued his fine form in the play-offs by scoring yet again while Manvir Singh (68′) added the second before VP Suhair (74′) pulled a goal back for the Highlanders.

Bagan adopted a completely different approach from the first leg. They had 16 shots in the first half but just three on target. It took them just three minutes to sound a warning. However, the Kolkata side deservingly took the lead in the 38th minute and when Roy Krishna set up Williams upfront, who was quick enough to beat the Highlanders’ defenders with pace. After entering the box, the Australian slotted home. That ensured that Bagan went into the breather with their noses in front.

NorthEast came back strongly in the second session and dominated the first 15 minutes. They created chances and tested the keeper, but just couldn’t get the equaliser they were looking at. Federico Gallego and Suhair were denied by Arindam. But Bagan were soon back in control and found a second goal from a quick counter. An NEUFC set-piece was cleared by Bagan and Krishna was quick to initiate an attack from outside his own box. The Fijian played a long ball to Manvir, who got away from the opposition defenders and shot past the keeper.

NEUFC pulled a goal back just before the cooling break. The goal came from a set-piece. Machado whipped in a corner which was flicked on by Benjamin Lambot. Arindam missed the ball completely before it hit the post and Suhair was at the right place to head it into the goal.