AFC Asian Cup 2019, India vs UAE, Highlights: As It Happened

Catch all the live updates from the 2019 AFC Asian Cup game between UAE vs India on News18Sports.com.

Catch all the live updates from the 2019 AFC Asian Cup game between UAE vs India on News18Sports.com.

Preview: If Thailand was big, India are faced with a bigger test in hosts United Arab Emirates in the AFC Asian Cup in Abu Dhabi, overcoming whom will require them to play out of their skins. Four days after creating a flutter with a stunning 4-1 drubbing of Thailand, India are now looking an upbeat lot in the continental showpiece.

While the result against Thailand, who have three J-League players in their ranks, was no mean feat, it will be a bigger achievement if the Indians are able to put it across the hosts who are gunning for the title. 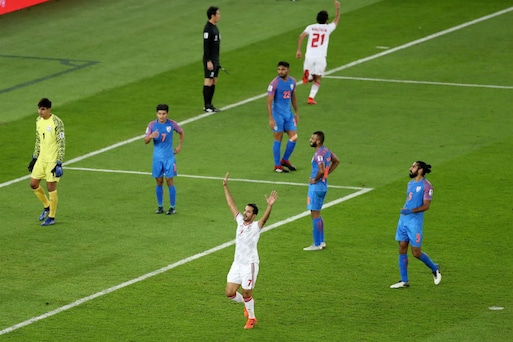 Khalfan Mubarak and Ali Mabkhout were on target for United Arab Emirates as the Asian Cup hosts beat India 2-0 on Thursday to close on a spot in the last 16.

Unbelievable! Great ball in by Rowlin Borges and Jhingan's header finds the cross bar. Second time that India have found the woodwork in the second half. Unlucky!

India have missed chances  in the first half and they have only themselves to blame with UAE set to go top of the table in a few minutes.

Goal! UAE have scored a second with Ali Mabkhout finishes past Gurpreet delightfully. Wonderful first touch to bring the ball down and then make space past Kotal before shooting. UAE lead 2-0!

Goal! UAE have scored a second with Ali Mabkhout finishes past Gurpreet delightfully. Wonderful first touch to bring the ball down and then make space past Kotal before shooting. UAE lead 2-0!

Less than five minutes left and India have been pegged back by UAE who are pushing them into the corners.

Jeje played in by Chhetri, but the sub slips and can't get let the attack progress into anything productive.

Another change for India as Udanta comes off for Jackichand Singh

The Indian defense is under the pump here and UAE have another corner and are looking dangerous here with 15 minutes to go.

Mayhem in the India penalty box! UAE captain AlHammadi shoots and it comes off the post, hits him and bounces out. Nervous moments for the Indian defense. That could very well have been curtains for India.

UAE with a dangerous set play and Gurpreet thankfully collects comfortably. Couple of defensive slip ups by India but no damage done against Constantine's men.

UAE have settled down on the ball and India are chasing the game more than they would want to. India bringing Rowling Borges coming on for Anirudh Thapa.

India's tempo has gone down in the last few minutes, which was expected after Jeje came on. Not the same industry as Halicharan. Just a little over 20 minutes to make something of this.

UAE looking for a second goal that would make it tough for India here, but the Blue Tigers have been threatening to score an equaliser. That would put the cat among the pigeons.

It's amazing that India haven't scored yet given the number of chances they have created and they way the UAE defense has allowed them space.

Just over the frame of the goal. Chhetri can't get it to dip enough.

Free-kick now in a very dangerous position after Thapa takes a clattering from the defender. Chhetri over the ball of course!

Free-kick now in a very dangerous position after Thapa takes a clattering from the defender. Chhetri over the ball of course!

Off the Crossbar!!! Beautiful one-two with Chhetri after Jeje held it up well initially. Smashing shot from The Flash and it hits the cross bar and bounces out. India's attackers have left this UAE defense rattled.

Jeje just outside the box on that free-kick takes the ball headed out and tried to volley it home, not very far away from the top corner.

India have a free-kick in the attacking half and Chhetri is telling Thapa exactly how it has to work here as they look for an equaliser.

UAE have had more of the possession all through the game but that hardly gives you a fair idea of the game so far.

UAE looking better than the first half already in the early minutes, much like India against Thailand.

India were exciting to watch in attack in the first half and will look to continue that, but will need the defense to tighten up as UAE look to kill this contest. A win for UAE will take them top of the group and a draw will be enough to keep India there.

Jeje will move to the top with Sunil Chhetri behind him and Ashique now moving out to the left.

Welcome back for the second half and UAE lead India 1-0. India are bringing on Jeje in place of Halicharan. Constantine is going all-out here.

Currently ranked 79th to India’s 97th, the United Arab Emirates were placed as high as 24 in the FIFA chart in January 2015.

Coach Stephen Constantine will be pleased with how the second half against Thailand turned out. India not only managed to shut down a lethal Thai attack after being tied 1-1 at the break, but also threatened at the other end through quick transitions in attack.

That stupendous show earned India three valuable points, a place on top of the group and a goal average of plus three.

“We have a very young side here and they are excited. Of course, hosts UAE will be a different game. They are a very good side but they are just another team standing in our way,” said Constantine.

As far as the Indian team is concerned, Sunil Chhetri hogs the limelight wherever he goes, and the Blue Tigers will again look up to him upfront.

It will not exactly be appropriate to say that Chhetri will be high on confidence after his double strikes against Thailand, which saw him go past Argentine superstar Lionel Messi in the goal-scoring chart among active international players, because that is an ingredient the Indian talisman never lacked. He is never overconfident, though.

In a team sport like football, a squad heavily dependent on Chhetri would not have experienced a 13-match unbeaten run on way to qualifying for the tournament.

Over reliance on the 34-year-old striker would not have seen them maul Thailand the way the did.

And that is a good sign for Constantine’s team, which will enhance its prospects of qualifying for the second round of the tournament for the first time in over 50 years if it is able to win or at least draw against the UAE.

It is even better for the team that for all his achievements over the years, Chhetri remains grounded.

Minutes after coming off the bench against Thailand, Jeje Lalpekhlua found the back of the net, and so did young Anirudh Thapa.

However, the surprise package was rookie forward Ashique Kuruniyan, Udanta Singh being the livewire down wide right.

Udanta, in fact, set up a couple of goals including the inch-perfect cross from right flank, which Chhetri slammed home for India’s second goal.

Chhetri and the FC Pune City winger had their eyes on goal whenever they were on the ball and the direct running of the latter and the technique and finishing prowess of the former left the opposition’s defence helpless. More of the could be expected against a superior opponent in UAE.

India can expect the UAE to come hard at them after a 1-1 stalemate against Bahrain in the tournament opener.

They wouldn’t be satisfied with their performances, especially in the attacking third. It was the late goal by substitute Ahmed Khalil that saved them the blushes.

Midfielder Ismail Hammadi is also a key player in UAE’s scheme of things.

UAE will look to dominate the midfield where Anirudh Thapa and Pronay Halder will come up against a tightly-knit unit.

India will also be required to be vigilant at the back as the likes of Ali Mabkhout and 2015 Asian Player of the Year Ahmed Khalil are goal-scorers with predatory instincts in the attacking third.

Mabkhout is seven goals shy of becoming UAE’s all-time top scorer. The central defensive pairing of Sandesh Jhingan and Anas Edathodika will be kept busy at the back, and so could be goalkeeper Gurpreet Singh Sandhu.

India’s grand opening seem to have also left the UAE football association concerned, which has adopted a unique strategy to fill the stands at the stadium with fans of the home team.

It has been reported that the UAE FA has purchased 5,000 tickets for the game against India and plans to distribute it only among the local fans on the match day for free to pack the stands with home support.

India will hope to not get carried away by all these, something their coach stressed a day after the win against Thailand.

“We don’t go into a match expecting to win 4-1 or 5-1. However, we are not trying to get carried away with the emotion. We still have two games left and we still need another two points to qualify from the group stages,” Constantine had said.

“After we have qualified, we can get a little bit excited, but our primary job is still to qualify out of the group stages.”

Only time will tell what’s in store.