The Portuguese captain has proved time and time again that he is one of the best players in the world. But when it comes to his off the pitch antics pundits have always seen him as a show off who boasts about his looks, girlfriends and fancy cars.

"We've had some great players at this club (Manchester United) in my 20 years, but he’s up with the best,” Sir Alex Ferguson once said about Cristiano Ronaldo.

The Portuguese skipper proved it once again on Sunday, albeit from the sideline this time.

Ronaldo’s off-field antics have often attracted severe criticism from pundits who see him as a show-off - obsessed with his looks, girlfriends and fancy cars.

But at the Euro 2016 finals on Sunday, a new and mature Ronaldo, who was in charge off-the-field drew, admiration from all. After injuring his knee early in the final against France, CR7 was reduced to a spectator in the second half and extra time. But the Real Madrid star still ended up lifting the Euro trophy and his enthusiasm from the sidelines was there for all to see.

Despite getting injured after just 24 minutes, he made himself useful in other ways. He gave instructions from the touchline, shouted like a manager and encouraged his teammates during the crucial extra-time period.

Ronaldo was seen stomping around the technical area, giving orders and tapping on his wrist; his Shenanigans reminding football fans of Sir Alex Ferguson. Ronaldo who is a keen learner of the game, surely would have seen a lot of Fergie on the sidelines and the pupil seems to have learned a trick or too.

Going berserk on the touchline, barking instructions at his teammates, it looked as if it was not Ronaldo but Ferguson out there.

Portugal's hopes looked quite bleak after he withdrew from the game due to injury but an inspiring extra-time speech from the captain, saw Portugal going all out.. The winning goal finally came in the 109th minute courtesy Eder.

"Ronaldo told me I would score the winning goal for the team. He gave me this strength, this energy and it was vital," the goal-scorer said after the match.

Portugal had never won a major tournament before Sunday and it was their fourth European Championship semi-final or final in the past five tournaments. Ronaldo was just 19 when Portugal reached the final in 2004 only to lose out to Greece. Now 12 years later, the 31-year-old has finally lived his dream.

His team wasn't fancied before or during the tournament but it showed character and quality throughout to lift the cup. 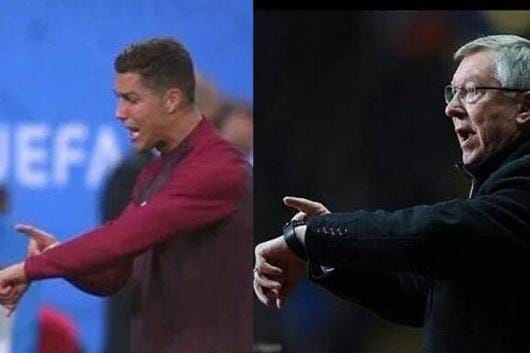 Ronaldo can change the games on field but on Sunday he did it from off the pitch.

The footballer comes from the small town in Madeira and attained superstar status during his time at United and he owes all that to one man - Ferguson. Ronaldo had a very sad childhood - his dad was an alcoholic and his mother was out most of the times to earn money. Devoid of his parent's love, it was Ferguson who fitted into the role during his stint at Manchester United.

He made Ronaldo a confident player. "He was a football father for me," said CR7 for Ferguson.