UEFA Euro 2020 Highlights, Portugal vs France and Germany vs Hungary: Portugal and France play out a 2-2 draw in Budapest while Germany draw 2-2 with Hungary in Munich. Based on the results, France ends up as Group F toppers while Germany qualify for the Round of 16 with second-placed finish. Portugal also qualify for the last 16 as one of the four best third-placed teams and their title defence stays alive.

Portugal vs France saw three penalties being given and all of them were converted. Cristiano Ronaldo converted two and matched Iranian Ali Daei’s record of most international goals while Karim Benzema converted France’s penalty. Benzema also scored one from open play. In Munich, Hungary had taken the lead through Adam Szalai in the 11th minute but Germany equalised in the 66th minute with Kai Havertz finding the back of the net. Two minutes after the Havertz goal, Hungary took the lead again with Schafer getting on the scoresheet but in the 84th minute, Goretzka equalised for Germany, eventually taking them though.

FULL TIME! The game of penalties ends in 2-2 draw and France finish on top of Group F and Portugal qualify for last 16 as one of the four best third-placed teams.

90+3' - With Bruno Fernandes bringing down Coman, there was a VAR check for a potential penalty decision but the contact was just outside the box and no penalty was the decision.

FULL TIME! Germany and Hungary play out thrilling 2-2 draw... all eyes on Portugal vs France! Germany are through! Hungary are out!

85' - We are into the business end of Portugal vs France and it's getting tense in Budapest.

Substitute Jamal Musiala on the run on the left and pulls a cross-back for Goretzka, who also came on in the second half. He passes it on for Werner, who also is a substitute, takes a shot but it is blocked but the ball falls for Goretzka, who strikes a powerful shot that Hungary keeper tries to save but it flies into the back of the net.

81' - Thomas Muller, Toni Kroos all see their effort go agonisingly wide. Germany are throwing the gauntlet at this Hungary defence. 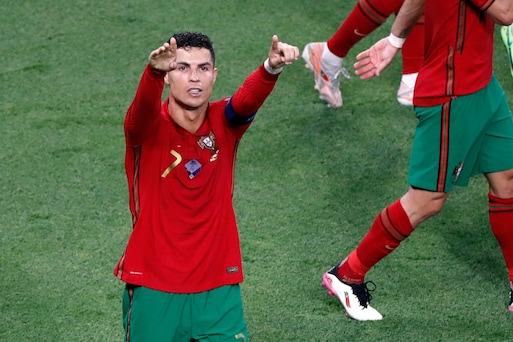 68' - Saves! Rui Patricio is on fire today. He first denies Pogba by diverting his curling strike to the post and then denies Antoine Griezmann's attempt on the rebound.

68' - GOAL! Andras Schafer gets the lead back for Hungary against Germany!

Hungary get the lead back within seconds of the restart! Adam Szalai lofts the ball long and Schafer runs on and diverts a header past Manuel Neuer and in for a goal!

66' - GOAL! Kai Havertz scores the equaliser for Germany against Hungary!

Joshua Kimmich sends in a dipping and curling free-kick as the Hungary keeper comes off his line for it and doesn't connect, Mat Hummels' header goes up into the air and drops for Havertz, who nods into the empty net.

60' - GOAL! Cristiano Ronaldo slots in his second penalty of the game to bring Portugal back on level terms. It's turning out to be a game of penalties!

Leroy Sane had stumbled and ended up handling the ball to give away the freekick. He was also shown a yellow card.

59' - PENALTY TO PORTUGAL! Now, Cristiano Ronaldo wins another penalty for Portugal after a handball from Kounde.

As things stand, Cristiano Ronaldo's Portugal, who are the regining Euro champions, will be out of Euro 2020! 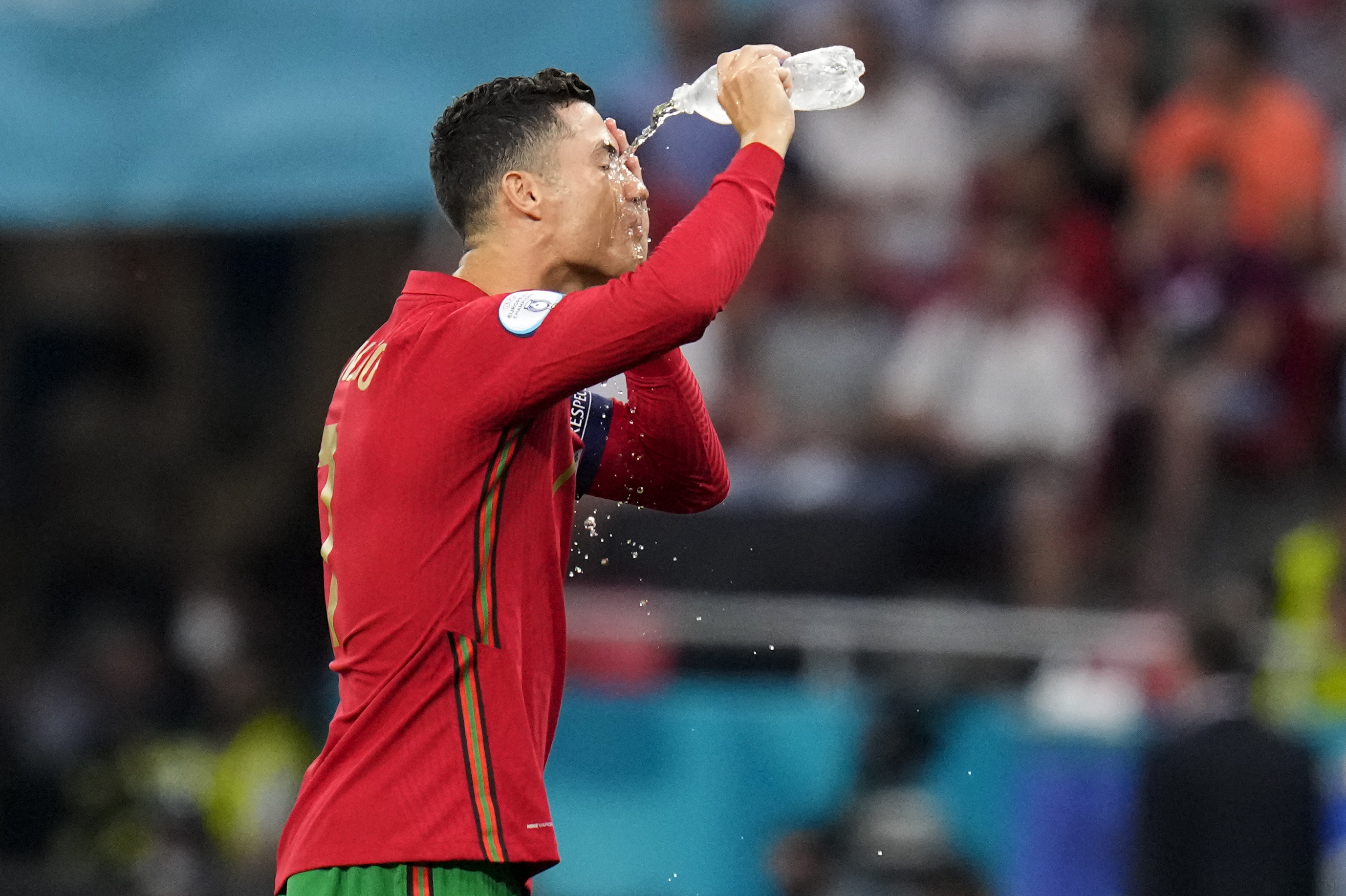 STAT: As things stand, with Portugal losing, Germany would qualify even in defeat as one of the best third-placed teams! 47' - GOAL! Karim Benzema scores his second to give France the lead and the goal is awarded by VAR overriding the linesman call for offside. It's Pogba once again with a brilliant through ball for Benzema, who did well to stay onside and then slot the ball home.

46' - Hungary are defending and waiting patiently to hit Germany on the break as the Germans hope they can break the stubborn defence of their visitors.

We back underway for the second 45 between Portugal-France and Germany-Hungary!

The statistics are slightly titled towards Portugal with them having 51 per cent of possession compared to 49 per cent with France. Portugal have had three more shots on goal than France and two more shots on target too.

But what matters in the end is the scoreline, and that is on level terms. 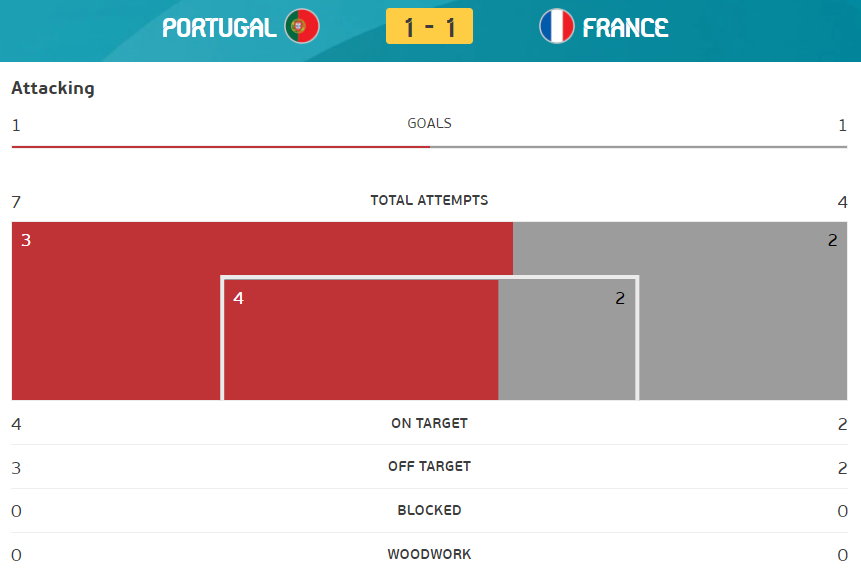 How it stands in Group F at the moment. The two goalscorers - Cristiano Ronaldo (L) and Karim Benzema - share a few words and smiles at half time. 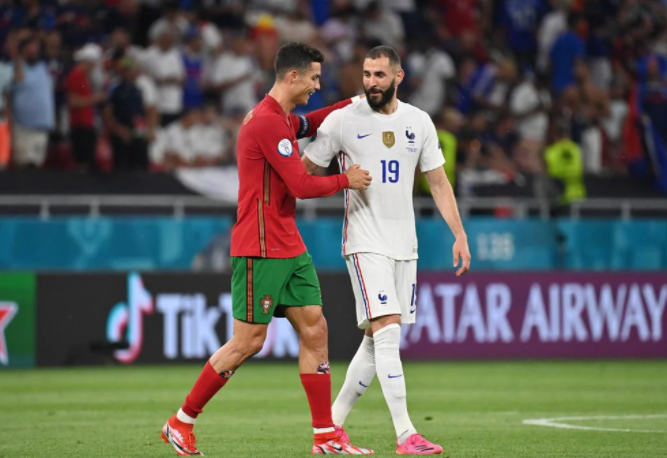 45+2' - GOAL! Karim Benzema sends Rui Patricio the wrong way to convert the penalty with ease. France are back level now, makes for a very interesting second half.

45' - PENALTY TO FRANCE! Nelsen Semedo is penalised for bringing down Kylian Mbappe in the box. Now, France have the chance to equalise the same way Portugal took the lead.

45' - It is pouring in Munich but the game carries on.... a game for everyone and not only for gentlemen. The beautiful game! 44' - Another free kick for Portugal but this time it's well blocked. The ball reaches nowhere near the box.

40' - Is Danilo the target man today? Now Antoine Griezmann takes a yellow card for an unnecessary foul on Danilo.

... and Joachim Low is definitely feeling under the weather! 36' - Portugal have gone defensive despite the lead and French players are looking frustrated at the moment. Hernandez has picked up a yellow card too.

Both Portugal-France and Germany-Hungary are tied at 2-2. (Photo Credit: AP)

ristiano Ronaldo scored two penalties to tie the overall men’s scoring record with 109 goals and give Portugal a 2-2 draw with France and a spot in the round of 16 of the European Championship. Ronaldo scored in the 31st minute and then equalized in the 60th after France forward Karim Benzema netted twice in between for the World Cup champions.

They were Benzema’s first goals at the tournament after failing to find the target at Euro 2008 and 2012.

France was already assured of a spot in the next round.

Leon Goretzka scored late to keep Germany in the European Championship after a 2-2 draw against Hungary on Wednesday.

Jamal Musiala made an immediate impact after coming on in the 82nd minute, eluding three defenders to give Timo Werner room to shoot. Werner was blocked but the rebound fell for Goretzka, who shot past goalkeeper Pter Gulcsi in the 84th.

It had looked like Adam Szalai was going to drag his team into the round of 16. The Hungary captain scored one goal early against the run of play and set up Andres Schafer to make it 2-1 right after Kai Havertz had equalized for Germany. But Goretzka rescued the Germans.