Euro 2020: Portugal, France and Germany in Group of Death

Portugal, France and Germany found themselves n the same group at the Euro 2020 draw, while the likes of England and Croatia have also been clubbed together.

Bucharest: Defending champions Portugal and the last two world champions, France and Germany, were thrown together in what German coach Joachim Loew described as the group of death following a lop-sided and complicated Euro 2020 draw on Saturday.

England were drawn against Croatia in a repeat of last year's World Cup semi-final while other favourites were given a much easier ride in the 24-team tournament which will be played in 12 different countries across the region.

The clear pick of the six first round pools was Group F, to be played in Munich and Budapest, which pitted France, Portugal and Germany, plus the winners of either playoff A or D.

However, the sting was slightly taken away by the format which allows four of the six third-placed teams to qualify for the round of 16,

UEFA's decision to rank the teams according to their result in the qualifiers, combined with Portugal's performance in their group, meant they ended up among the third seeds while France were one of the second seeds.

"This is a group of death," said Loew whose side will play all three games at home under competition rules. "The expectations will be quite high. For our young team, this will be huge challenge but also a big motivation."

England and Croatia, who have met in the Nations League since Croatia's 2-1 win in Moscow last year, will be joined in Group D by the Czech Republic and the winners of playoff C - either Scotland, Norway, Serbia or Israel.

The Group D winners will face the runners-up from Germany's group in the round of 16 while the second-placed team will travel to Copenhagen to meet the Group E runners-up - potentially an easier match.

The Group will be played in London - host for the semi-finals and final - and Glasgow.

Other favourites were given a much easier-looking ride.

Italy, who won all 10 qualifying games as they bounced back from failing to make the last World Cup, will face Turkey, Wales and Switzerland in Group A, in Rome and Baku. 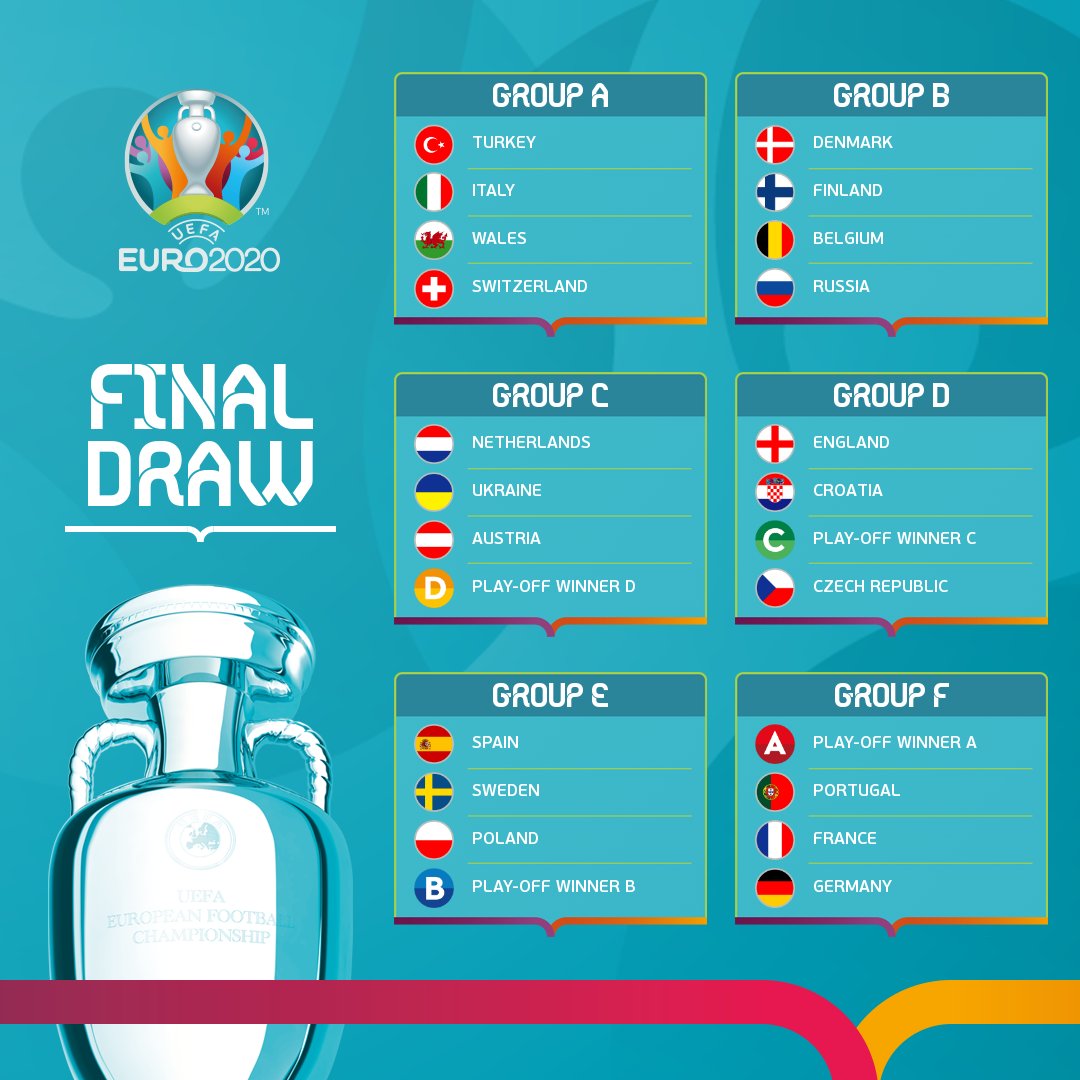 "We have a slight advantage by playing at home. Maybe some will think we are favourites but we need to confirm everything on the pitch, as always," Italy coach Roberto Mancini said.

Euro 2008 and 2012 champions Spain, who will jointly host Group E in Bilbao with Dublin, play Sweden, Poland and playoff winner B - either Bosnia, Slovakia, Ireland or Northern Ireland.

Belgium's opponents in Group B will be Denmark and Russia -who are both host nations - and Finland, who will be making their first appearance in a European Championship or World Cup.

The Netherlands, who like Italy missed out on the last World Cup, were pitted against Ukraine, Austria and playoff winner A or D in Group C, which will be played in Amsterdam and Bucharest.

Under the complex rules, all host nations will play their group games at home, meaning a number of teams had been allocated their groups before the draw

"The rules are clear, they were accepted by everybody," said UEFA deputy general secretary Giorgio Marchetti.

"Portugal are in pot three because they didn't win their group, and the winner of their group was Ukraine. And Ukraine, thanks to their results, are in pot one, and everybody accepts it because once again we have clear rules."