Euro 2020, Ukraine vs Austria and North Macedonia vs Netherlands Highlights: Memphis Depay scored in the 24th minute to hand Netherlands the lead as Georginio Wijnaldum netted in the 51st and 58th minute against North Macedonia in their final Euro 2020 Group C match. On other hand, Christoph Baumgartner gave Austria the lead in the 21st minute against Ukraine in Bucharest.

Netherlands finished with nine points as Austria is second with six. Ukraine is third with three points while North Macedonia have none.

With both results looking set, Ukraine vs Austria and North Macedonia vs Netherlands, it has been labouring to a still as everyone waits for the final whistle...

72' - Not a Goal! Darko Churlinov put the ball in the back of the net but it is again cancelled for being off side.

69 ' - Goran Pandev is substituted off and he gets and emotional and impromptu guard of honour from his team-mates. Johan Cruijff Arena rins with warm applauses. Brilliant passing from Netherlands as Malen's through ball cuts the North Macedonia defence in half for Depay's intelligent burst into the box. His shot is saved but falls for the Dutch captain, who  blasts the rebound high into the net.

Wijnaldum is here, ther and everywhere! he starts the move by winning the ball in the final third. A few passes in mid-field breaks past the North Macedonia defence, as the ball finds it's way back to the captain with a neat cutback, and the skipper makes no mistake from close range.

There are substitutuions in Bucharest and Amsterdam!

Netherlands' Denzel Dumfries and Stefan de Vrij are off and on come Steven Berguis and Jurrien Timber.

Rusian Malinnovskyi is replaced by Viktor Tsygankov for North Macedonia.

HALF TIME! Austria and Netherlands are both leading, against Ukraine and North Macedonia respectively, at the break and as things stand, would qualify for last 16!

Christoph Baumgartner and Memphis Depay's goal the difference in Bucharest and Amsterdam!

The 21-year-old Christoph Baumgartner became the youngest player to score at Euro 2020 so far but he was forced off with a head injury. 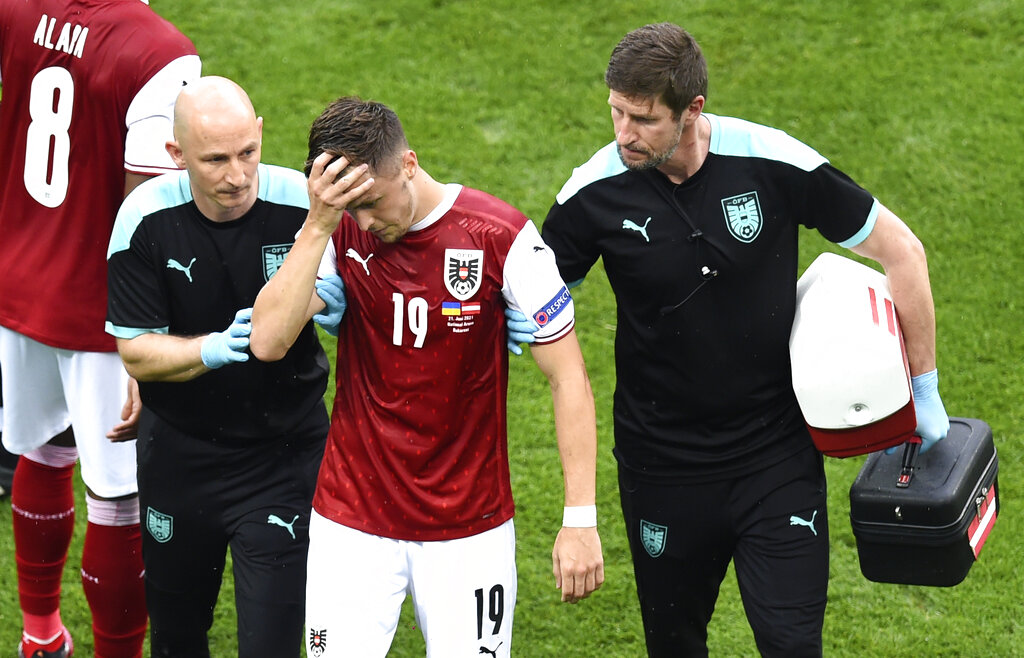 39' - It has been an really compettitve between Ezgjan Alioski and Denzel Dumfries on the flanks. The North Maceondian has had the better of Dumfries but the Dutch has also got through on goal on a few occassions.

Malen traves with teh ball from deep inside his wo n half before picking out Depay in the middle, who then sens it back to Malen on the overlap. He returns to favour with neat cutback as Depay slotted the ball home past the keeper.

David Alaba provides another excellent delivery as Ukraine give away too many corners. Baumgartner steals in front of the Ukraine defender and prods the ball past he keeper.

18' - It has been a mid-feield batte in Bucharest so far as Ukraine are having to deal with Austria’s high pressing. Regular chances though none have been converted so far... 9' - Not a Goal! Off Side! Aleksandar Trajkovski puts the ball into the back of then net from a brilliant pass from Goran Pandev but the referee calls play back as the North Macedonian forward had wandered in off into and position.

KICK OFF! Ukraine-Austria and North Macedonia-Netherlands gets us underway in Bucharest and Amsterdam!

The seat for Ukraine vs Austria...

The seat for North Macedonia vs Netherlands...

🇺🇦 Sydorchuk in for Stepanenko in the holding midfield role for Ukraine.

🇦🇹 Ulmer and Gregoritsch replaced by Grillitsch and Arnautović in the Austria XI. #EURO2020

🇲🇰 Tričkovski comes in for his first start of the tournament, Trajkovski restored to the North Macedonia line-up.

🇳🇱 Malen starts instead of Weghorst up front, and Gravenberch in for De Roon in the Dutch midfield.

👀 Most exciting players on show?#EURO2020

20:42 (IST)
Euro 2020: Ukraine Will Not Play for a Draw Against Austria, Says Coach Andriy Shevchenko 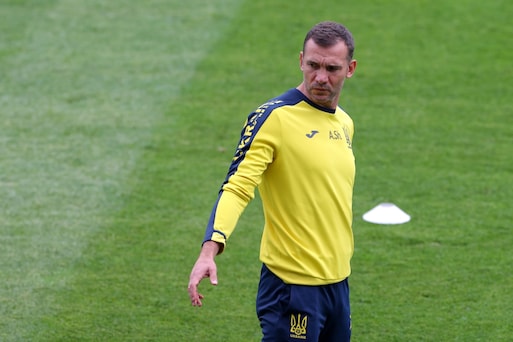 Ukraine will not be lulled into complacency by the fact a draw in their final Group C game against Austria guarantees progress to the Euro 2020 knockouts, coach Andriy Shevchenko said on Sunday.

Goran Pandev is ready to retire from international football... again.

The 37-year-old Pandev said that North Macedonia's final group match against Netherlands at the Euro 2020 will be his last.

“Yes, this is it for me, the last match in the jersey of Macedonia national football team,” Pandev said. “I think this is the right moment to say goodbye to the national team.” Hello and Welcome to the LIVE coverage of the European Championships on the last matchday for Group C.

Here are today's matches which will be played simultaniously:

Ukraine vs Austria and North Macedonia vs Netherlands

Georginio Wijnaldum scored twice and Memphis Depay added to his goal haul in a 3-0 Netherlands win over North Macedonia on Monday to keep their 100% record at Euro 2020 – but not before surviving some early scares at the Johan Cruyff Arena.

The Dutch had already secured top place in Group C but emphasised their dominance with a full haul of points as North Macedonia exited the tournament with none.

Depay opened the scoring in the first half and Wijnaldum added two in the space of seven minutes to go ahead of Marco van Basten on the list of his country’s scorers.

The captain now has 25 goals for the Netherlands, who head to Budapest for their last-16 match on Sunday against one of the best third-placed finishers from Groups D, E or F.

North Macedonia offered plucky intent at creating an upset and had the ball in the Dutch net early, only for Ivan Trickovski to be ruled off side. Aleksandar Trajkovski then smashed in a powerful shot that had Dutch goalkeeper Marten Stekelenburg beaten but thundered back out off the post.

Instead the home side took the lead in the 24th minute, albeit amid some controversy, as a tackle from Daley Blind on Goran Pandev set up a counter attack, swiftly executed with Donyell Malen and Depay combining before the latter tucked away the ball.

A VAR check, however, found Blind’s tackle was legal, much to the disgust of the Macedonians.

Straight after half-time, Matthijs de Ligt had a powerful header cleared off the line by Trickovski as the Dutch served notice of a more determined approach. Wijnaldum then doubled the score six minutes into the half as Depay set him up to finish from close range.

More of their confident passing allowed Wijnaldum another goal in the 58th minute, with Depay once more the provider, and the skipper might have completed a hattrick four minutes thereafter, but he shot wide.

Substitute Wout Weghorst crashed the ball against the bar with his first touch after coming on but North Macedonia managed to pull down the shutters for the last 20 minutes.

The Dutch, who also won in the group against Ukraine and Austria, have now scored at least two goals in their last 10 internationals in a run stretching back to November. Austria finished second in the group by beating Ukraine 1-0 in Bucharest at the same time.

North Macedonia captain Pandev, 37, went off with some 22 minutes left at the end of a 20-year international career and was accorded a guard of honour by substitutes and team officials on the touchline. He had announced his intention to retire ahead of Monday’s match but had little impact on his final outing.

Christoph Baumgartner is looking forward to a “special” meeting with Italy in the last 16 after his goal in a 1-0 win over Ukraine handed his side second place in Group C and a first ever appearance in the European Championship knockout stages.

Austria were worthy winners in a poor game, but the result leaves Ukraine sweating on what looks a slim chance they will be among the four best third-placed teams and also earn their spot in the next round.

Baumgartner turned in David Alaba’s corner midway through the first half, and was then forced off after a blow to the head, as Austria profited from a lacklustre display from Ukraine, who battled to find fluidity when it seemingly mattered most in the tournament.

The Netherlands, who beat North Macedonia 3-0 in their final game, top the group with a full haul of nine points from their three games, while Austria are second on six points and Ukraine have three, and a negative goal difference.

Austria may not be celebrating for long, though, as they face the in-form Italians in the last 16 in London on Saturday, coming up against Roberto Mancini’s team that are unbeaten in their last 30 internationals and who have not conceded in 11 games.

“I still cannot believe it,” Baumgartner told reporters. “And on top of that my heard hurts. I’m happy for all of Austria and I hope everyone enjoyed it. We have had a tough time with the coronavirus, so enjoy this now.

“The round of 16 game against Italy will be something special. We made history today, but it is still not over.”

Ukraine coach Andriy Shevchenko will be bewildered with the limp showing of his side – they did, after all, finish top of their qualifying pool, picking up 20 points from their eight games – three more than holders Portugal. But they showed none of that tenacity against their workmanlike opponents.

“I’m so disappointed. I don’t even know what to say,” Ukraine midfielder Olexandr Zinchenko told EURO2020.com. “Our performance in the first half was unacceptable. The way we behaved on the pitch was unacceptable.

“We felt very well ahead of the game in the training sessions but nothing worked for us tonight.”

Austria made the early running and went ahead on 21 minutes through a simply-worked goal. Alaba’s corner delivery reached Baumgartner, who had moved ahead of his marker and prodded the ball into the net.

Marko Arnautovic, back in the side after a suspension, spurned an excellent opportunity to double the lead before the break when he found himself unmarked in the box, but could not get a solid connection on an inviting cross from Alessandro Schopf and the ball dribbled wide.

Ukraine were brighter at the start of the second half and showed more ambition to get forward and put Austria under pressure.

But a lack of accuracy with their passing continued to hamper the side and the only time they looked threatening was from occasional set-piece opportunities.

Even in the closing stages, as the minutes ticked away, they never looked like getting the goal that would have meant they finished above the Austrians.

Ukraine President Volodymyr Zelenskiy was forgiving of the team at the final whistle, perhaps more than many of the country’s supporters.

“Yes, it was another difficult match. Yes, today we had a bitter and unfortunate loss. But even after the team lost the chance of making it to the last 16, our support is with you. Because these are our guys. We are with you, national team! Glory to Ukraine!” Zelenskiy said.