The 21st edition of the FIFA World Cup which will be played in Russia is upon us. 32 teams from all over the world will fight to be crowned champions of largest sporting extravaganza the world has ever seen. Over the 21 editions, there have been several memorable performances or incidents that have made each World Cup unique. Individual performances which have captured imaginations, rivalries which have brought fans to the edge of their seats, and even off field incidents that have caused terrible humiliation to a nation.

The 21st edition of the FIFA World Cup which will be played in Russia is upon us. 32 teams from all over the world will fight to be crowned champions of largest sporting extravaganza the world has ever seen. Over the 21 editions, there have been several memorable performances or incidents that have made each World Cup unique. Individual performances which have captured imaginations, rivalries which have brought fans to the edge of their seats, and even off field incidents that have caused terrible humiliation to a nation.

Uruguay selected to host the first WC as the country celebrated the centenary of its first constitution. A superpower back then, the South Americans had also won Gold at the 1928 Summer Olympics in Amsterdam. The Uruguayans won the cup as they brushed past Argentina 4-2 in the final.

Lucien Laurent, the French Forward who scored the first ever goal at the WC against Mexico, said: "Back then I couldn't have imagined the significance the goal would have. We didn't even know the WC would last. I remember when I got home, there was just a tiny mention in one of the papers. Football was in its infancy”.

At the height of his powers, Italian dictator Benito Mussolini would prove critical in Italy's triumph at the second ever WC. FIFA president at the time Jules Rimet remarked, "FIFA are not organizing this tournament, he is.”

The Italian leader's imprints were visible in every match the Italians participated in. So obsessed with the idea was Mussolini of Italy lifting the trophy that he picked out match officials for every Azzuri match.

The quarterfinals saw the Italian's rough play force out three Spanish players through injury, while the appointment of Swedish referee Ivan Eklind by the dictator for semis and final saw Italy edge past favorites Austria and then, Czechoslovakia. Foul plays by the Italians were turned a blind eye by Eklind who as per as some match reports intercepted a pass by the Austrians in the semi-finals.

Italy's Fascist Salutes Angers the Rest of the World

With England not participating and Spain involved in a civil war, Italy were the story of the tournament. Constantly booed by the fans, the Azzuri refused to wear their white away kits against France in the Quarters. Mussolini's intervention meant Italy would adorn the black jerseys and were made to hold their fascist salutes before kick-off. 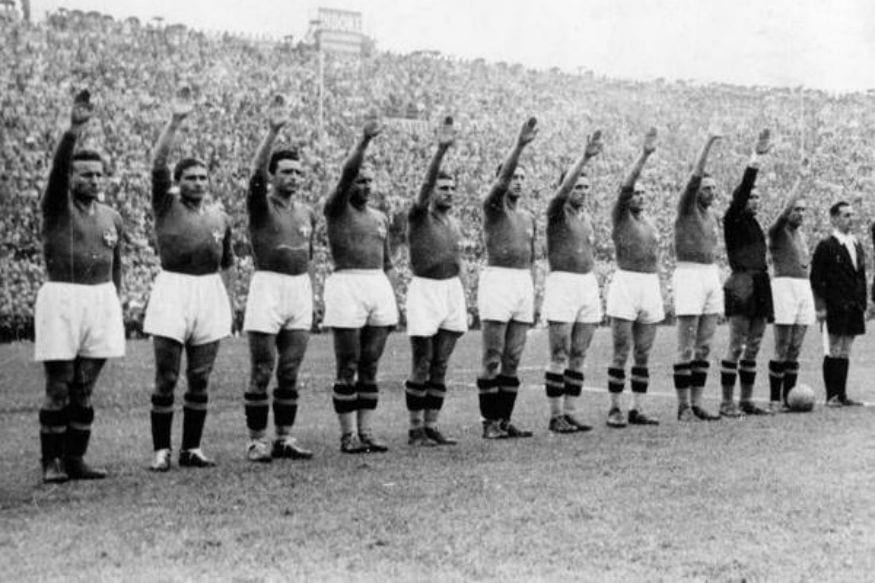 After beating the host nation 3-1 in the quarters, Italy beat Brazil 2-1 in the semi-final before setting up a summit clash with Hungary in the final. The Azzuri, led by Giuseppe Meazza, prevailed beating the Hungarians 4-2. With the World War imminent, the World Cup would be put on hold for 12 years.

200,000 Witness the Final Between Brazil and Uruguay Live

The final match, held at the legendary Maracana in Rio de Janeiro, saw a crowd of over 200,000 in a stadium with a maximum capacity of 96,000. Brazilian newspapers O Mundo printed an edition before the final labeling the Brazilians as champions. The Uruguayan captain at the time bought as many copies as he could and encouraged his teammates to urinate on them. Uruguayan former footballer Alcides Ghiggia, member of the national team that won the 1950 World Cup at Maracana stadium in Rio de Janeiro, Brazil, poses May 14, 2010 at the Football Museum in Montevideo, in front of a huge print depicting the Maracana stadium packed with fans during the Brazil vs Uruguay final. Ghiggia scored the second and decisive goal that gave the victory to Uruguay against all odds and cemented the legend of the "Maracanazo" among the Uruguayans of several generations. AFP PHOTO/PANTA ASTIAZARAN

Brazil took the lead early in the second half, but Uruguay equalised only to take the lead and break 200,000 Brazilian hearts in the stadium as they celebrated being crowned champions for the second time. It is for certain that this record attendance will not be broken in the near future.

Bern Witnesses Magic as the Germans beat the All-conquering Hungarians

The WC would be a sweet fairy tale for the Germans who started the tournament in a disastrous fashion as they were annihilated by favorites Hungary led by Ferenc Puskás in the group stage 8-3.

West Germany, in the final, would face-off against the only team that had beaten them thus far, Hungary. The tournament favorites were led by Puskas who had sent shock waves across Europe after scoring 3 goals in the first two matches. Hungary were so strong that they had left their talisman on the bench for the quarters and semis.

In a final recognized across Germany as The Magic of Bern they went down 2-0 in the first ten minutes. The Germans fought back to equalize soon. The teams were fought for the next hour as no decider emerged until the 84th minute where the Germans scored and completed a miraculous comeback.

Pele Announces Himself on the Global Stage

The WC in Sweden is known for two notable introductions to football. Firstly, the WC was the stage for the introduction of Pele, who would go on to become one of the greatest to ever grace the sport, and secondly, it was the first to be televised globally.

Brazil were 2-1 down in the finals against the host until Pele took over the show. An audacious flick over marker followed by a volley leveled proceedings as more was yet to come. A second goal would follow in the dying moments of the game, but by then Brazil were romping home after humbling Sweden 5-2. He became a global phenomenon as fans across the world thousands of miles away recognized and saw his marvelous talents.

Italy and Chile Throw Punches in the Battle of Santiago

With Pele out injured, Brazil were in trouble for the showcase event happening in Chile. But, they would go on to retain their title after a series of captivating displays from Garrincha, often regarded as one of the best dribblers of all time. He dazzled with his quick feet and goal scoring ability as he took the mantle from Pele to take the South Americans to glory.

However, despite his flair and Brazil's heroics, the tournament in Chile was often regarded as toxic. Marred by violence and absurd fouls on the pitch, most notably in the match between the hosts and Italy where Chile would win 2-0, the WC had hit a new low.

In the match between the Azzuri and La Roja, two players were sent-off, numerous punches were thrown, and police intervention was required four times. Interestingly, it was the referee of this match, Ken Aston, who would go onto invent the concept of yellow and red cards.

England's triumph in the final of the 1966 WC is for many football fans the cruelest defeat the Germans could have faced. With 98,000 people cheering the Three Lions, expectations were high for a team captained by Bobby Moore. Misfiring Geoff Hurst had scored a single goal till the final, put in an indescribable performance.

Having put England into a lead early on, the Moore-led side found themselves facing extra time after scores were tied 2-2 during regulation. The defending champions had twice comeback to equalise, but that would be it as Hurst's 'ghost' goal dampened their spirits to a point of no return. His shot hit the crossbar and bounced down onto the line and was awarded a goal. Fast forward all those years, the debate still rages on if the goal should have been awarded. Hurst would go onto score one more in the dying minutes as England sealed their first and only ever triumph in the cup.

The Brazilians Take the World by Storm in Colour

The Brazilian team at the 1970 WC is often regarded as the best team to ever play the beautiful game. With Gerson, Jairzinho, Rivellino, and Tostao while being spearheaded by Pele, it was Brazil's destiny to claim the glorious trophy for the third time and become the first team to do so in the process.

The Brazilians routed the Italians 4-1 with fabulous duo of Jairzinho and Pele on the scoresheet along with captain Carlos Alberto and midfield marshal Gerson. The 1970 tournament also wrote its name in history for being the first tournament to be broadcasted in color. The WC attracted a record number of television audiences as the showcase event produced glorious attacking football despite the high temperatures.

The Dutch side had been the strongest since its inception, and Ajax, one of the largest local Dutch clubs, had won three Europeans on the trot between 1971-73. The players that had formed Ajax's backbone in those golden years came together to form the spine of this Dutch team that would go onto dazzle on the largest stage.

Netherlands had captured the imaginations of the fans as they cruised to the final crushing Argentina, Brazil, Uruguay and East Germany. In the final, the vastly effective Dutch forwards were marked by a defense marshaled by Franz Beckenbauer who neutralized any threats the Netherlands brought as they attacked. West Germany would go onto win the final 2-1 after coming back from a goal down with Gerd Muller scoring the winner.