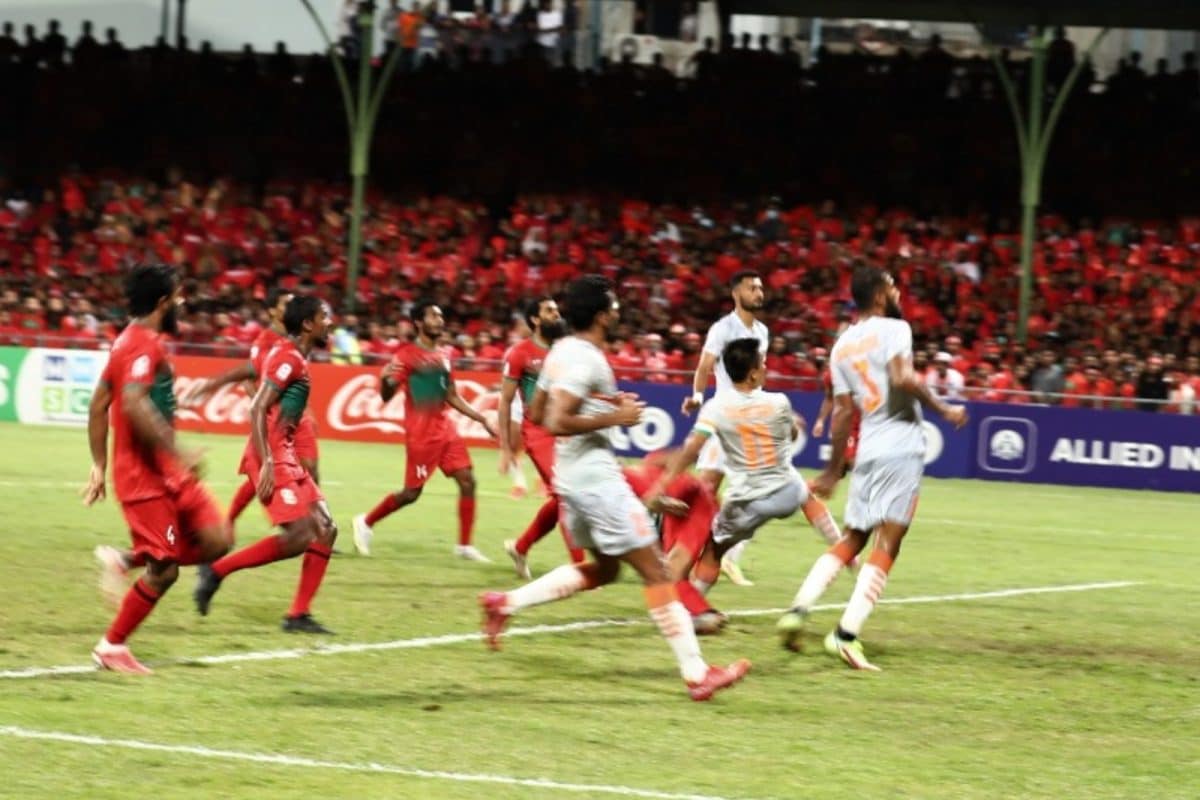 India vs Maldives, SAFF Championship 2021 Highlights: Sunil Chhetri’s brace and Manvir Singh’s goal helped India beat Maldives 3-1 to make the final, where they will meet Nepal. Igor Stimac and Subhasish Bose were both sent off and will not be available for the final. Stimac will not be on the sidelines as the coach while Subhasish will not be in the defence.

The Indian men’s football team reached the final of SAFF Championship 2021 with a 3-1 win over Maldives. Sunil Chhetri scored a brace while Manvir Singh scored the opener as India came out victorious. Maldives fought hard and Ali Ashfaq scored off a penalty but Igor Stimac’s men took the win.

However, the match saw Stimac and Subhasish Bose sent off and they won’t be available for the final.

The referee blows his whistle and brings an end to the game! India are through to the Final! 🙌

Subhasish Bose, who was already on a yellow, makes a foul and leaves the referee no choice but to show him a second yellow. India are down to 10 men for the last minute of the match.

Maldives are trying to push hard but it’s an uphill battle for them out there.

The referee is not happy with Igor Stimac’s conduct. The Indian head coach sees a yellow card on the night and is sent off. India will be without their coach on the sidelines for the last 10 minutes.

India increase their lead to two goals, courtesy Sunil Chhetri. A free kick is swung in from the right and Chhetri rises high again and loops his header into the top corner.

Maldives get a free kick just outside the box and the spot kick hits the crossbar. Maldives are looking for a reply for the second time in the match.

Apuia’s cross is played into Sunil Chhetri’s path by Manvir. The Indian captain makes no mistake and volleys it home. India have the lead once again.

Now Sana Singh goes into the referee’s books. He had come on for Mandar, who was on a yellow, and now he gets booked too.

Brandon Fernandes is down injured. He is taken off on the stretcher and Udanta Singh comes on in place of him.

The second half kicks off in Male with both the teams being on equal terms.

The Maldives crowd is on its feet! India dominated most of that first half with the ball and even took the lead but Ali Ashfaq converted from the spot to bring Maldives back on level terms.

India, who need a win here to make the SAFF Championship final, tried hard to find spaces and Manvir Singh gave them the lead in the 33rd minute with a shot at near post.

However, Maldives did not give up and kept pushing ahead. In the 44th minute, Pritam Kotal erred in the box giving away a penalty that the Maldives striker made no mistake with.

Ali Ashfaq makes no mistake from the spot at all. He sends Gurpreet the wrong way and finds the back of the net Gurpreet’s left to bring Maldives back on level terms.

Ali Ashfaq scores from the penalty spot as the hosts draw level.

Penalty to Maldives! Pritam Kotal with a reckless challenge inside the box and now, Maldives have a golden chance to equalise.

Good movement from Maldives but Hamza’s final shot was off the mark. Good link-up play there and Maldives would want to do more of that.

India are upping the ante here. They are trying to keep the ball and find spaces in the Maldives box.

Substitution for India! Chinglensana Singh comes on for Mandar Rao Dessai. Mandar was on a yellow.

GOAL! Manvir Singh puts India in the lead. A proper counter-attacking move from India and Manvir is in space to the right of the goalpost. Manvir goes for the shot at the near post and rattles the net. The keeper could have done better, the ball goes just above his hand.

33′ GOOOAAAAL! MANVIR SMASHES IT INTO THE TOP CORNER!

Subhasish gets a yellow card for bringing down Ashfaq. That’s a third yellow for Team India!

Ali Ashfaq gets close once again but Subhasish does well to hold his ground and deny the Maldivian striker.

Chhetri with a fantastic brace helped India take a 3-1 lead. Ali Ashfaq converts from the spot to make it 1-1 for Maldives. Manvir Singh with a shot to the near post to give India the 1-0 lead. Sunil Chhetri’s header off the free kick hit the crossbar. The Indian men’s football team need a win on Wednesday to make the final of the SAFF Championship 2021 as they take on Maldives, who can qualify with just a draw.

Nepal are waiting for their opponents in the final after they secured their spot with a draw against Bangladesh. India drew their first two matches of the tournament against Bangladesh and Sri Lanka after which they needed a win against Nepal in the third match to stay in the tournament. The Blue Tigers did edge out Nepal to boost their chances of making the final. They now need a victory over Maldives to secure their berth in the final.

The worst performance for seven-time champions India was the third-place finish in 2003 and the country has either won or finished runners-up in 11 previous editions.

wo-time and defending champions Maldives have never been easy opponents for India in the history of this regional tournament though the island country sits 51 ranking points below India in FIFA chart at 158th.

The side led by veteran Ali Ashfaq, one of the best strikers in the region, have regrouped themselves after losing their opening match against Nepal, beating Bangladesh 2-0 and Sri Lanka 1-0. Just like India captain Sunil Chhetri, the 36-year-old Ashfaq has carried Maldives football on his shoulders for a long time and he has scored two of his side’s three goals in this tournament. He will, no doubt, be the man India will have to be wary about.

India coach Igor Stimac has rued the inability of his forwards to convert the scoring chances. “We need to improve our scoring from the chances which we are creating,” he said. “It is simple, if we do that, games become very easy. Otherwise you need to suffer till the end, or even beyond the end,” he added, still believing that his side can reach the final.

With the football crazy Maldivians likely to play the role of 12th player on Wednesday, the onus is on Stimac and his men to avert the country’s worst football ignominy in a long time.