India vs Qatar Highlights, FIFA World Cup 2022 Qualifier: Indian football team went down 0-1 to Asian champions Qatar in a joint qualifying tournament for the 2023 Asian Cup and the 2022 World Cup. Abdel Aziz scored the solitary goal in the 33rd minute for Qatar. While Qatar are ranked 58th, India are 105th. India are bidding to qualify for the 2023 Asian Cup, though they are out of contention for next year’s World Cup.

India’s other qualification matches are against Bangladesh on June 7 and Afghanistan on June 15. 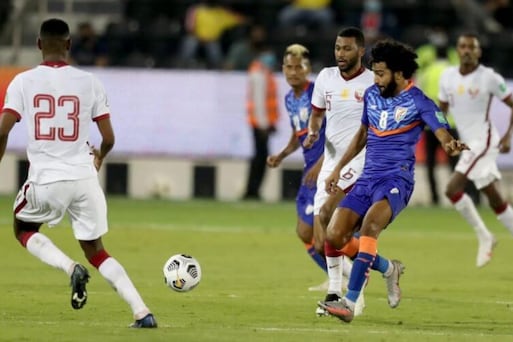 Abdel Aziz Hatim scored the only goal of the match after Rahul Bheke was sent off as India lost to Qatar in their 2022 FIFA World Cup and 2023 AFC Asian Cup qualifier.

Abdelaziz's goal in the 33rd minute turns out to be the difference between the two sides on the night.

Qatar make one last change as Homam Ahmed come on for Abdelkarim Hassan. What a game the 'left back' has had.

79' - Qatar's Almoez Ali goes into the referee's book for his challenge on Suresh Singh.

Meanwhile, India made another change as Akash Mishra in for Bipin Singh. Interesting decision from the coach, maybe Ashique Kuruniyan will push up and thenew man fill in for him in defence.

Meanwhile, Qatar too had made a change as Abdullah Abdulsalam Alahraq was brought on in place of Mohammed Muntari

India were carved open at the back as Shibashish Bose lost possession but Gurpreet Singh Sandhu makes himself big and makes a good save to keep India in the game.

A minute later makes another save with his legs!

India are getting chances but the final ball in behind the defence have to be better.

Manvir Singh's overcooked through ball for Udanta a prime example.

52' - Shot and Saved! Mohammed Muntari gets the ball from Abdelkarim Hassan and takes a shot on the turn but it is straight at Gurpreet Singh Sandhu, who parries it away.

47' - Saved! The second half starts and so does the shots from Qatar. Abdelkarim drives into the penalty box after takes a powerful shot but Gurpreet is quick to read the danger and slides out to deny the left-back as the ball goes out for a corner.

Second half underway... Sunil Chhetri is brought off and Udanta Singh is on for India!

If the odds were against India at the start of the game, after the first half they have seemed to be stacked even higher.

India have defended with almost 10 men behind the ball at times in the closing parts of the half and will need to rely on quick counter-attacks and good team shape if they are to eke out a positive result from the game.

Qatar lead at the break thanks to the Abdel Aziz strike.10-man India, on the other hand, need to find a way back in the game.

Manvir Singh gets the ball from Sunil Chhetri, who releases the ball quickly. The young Indian forward  tires to check back on his left after going down the right but is thwarted in his movement to kick the ball at goal.

Ashique Kuruniyan makes a snaking run down the spine of the Qatar defence but as soon s he made his way close to the penalty box he is eased off the ball.

Abdel Aziz Hatim with a scrappy goal! Yusuf's cross finds its way to Abdel, who shots past a diving Gurpreet through a sea of bodies.

What a ball from Ashique Kuruniyan... only if Manvir Singh could have controlled the ball. It would have been 1-0 India.

At the opposite end, Qatar on the break get down the right channel and get the ball to Abdel Aziz Hatim, who takes a vicious shot that whizzed past the right post of Gurpreet Singh Sandhu.

Suresh Singh is playing as a right wight-back with his mid-field partner Glan Martins is sitting deep to stop the waves of Qatari attack.

This is going to be a long long night for India.

He had handled the ball to get his second yellow and India are down to 10!

The right back is adjudged to have intentionally handled the ball while defending.

12' - Qatar on the break with acres of space for Hasan Al Haydos. India's right back Rahul Bheke is caught out of position but Pritam Kotal is there to clean up and the danger is averted.

10' - Rahu Bheke goes into the referee's book for his late challenge on Bassam Hisham Alrawifrom behind.

Sandesh Jhingan makes a tackle inside the penalty box on Abdelkarim Hassan, who falls to the ground.. nothing from the referee.

India have been on the back foot for the opening moments of the game.

Here we go! India and Qatar are away at the Jassim Bin Hamad Stadium in Doha.

Important for the home team, who are playing at the home stadium of the away team...

Glan Martins received his debut cap and had credited his call up for the 2022 FIFA World Cup qualifiers and 2023 AFC Asian Cup due his good showing in the AFC Champions League!

22:02 (IST)
We Need to Brave and Admit That We Haven’t Played to Our Potential: Sandesh Jhingan Sandesh Jhingan returns to the Indian football team against Qatar in the FIFA World Cup Qualifiers. Ahead of the game, Indian football team coach Igor Stimac had said holding Qatar to a goalless draw in the first round of the 2022 World Cup Qualifiers was a “big surprise" and it will be extremely difficult to tame the Asian champions again.

“We are very proud of what we achieved in the last game. That was a big surprise to everyone all over the world India holding Asian champions Qatar in Doha," Stimac said in the pre-match press conference.

“But that was a different situation. From the very first minute of our arrival there were thousands of our supporters giving us that extra energy making us feel that we were playing at home."

There is a huge difference in both the quality and rankings of the two teams. While Qatar are ranked 58th, India are 105th.

For the record, since 2018 Qatar have won 21 of the 35 matches played, with six draws, and eight losses, and sit atop Group E at the moment with 16 points from six games.

India’s head coach Igor Stimac understands the significance of these three matches, and is aware of the commitment of his boys.

“I reiterate, they are all good professionals, and I don’t have much of a task in keeping them motivated. The boys have been working hard with full commitment on the training pitch. They know that they are representing their country, and they will do everything possible to defend the India colours,” he said.

However, Indian players will draw inspiration from the last time they clashed with Qatar. Minus an ailing Chhetri, India put up a brave fight and won many hearts. It is considered one of the best results in India’s recent football history.

Goalkeeper Gurpreet Singh Sandhu, who had captained India in Chhetri’s absence in that match, says the two situations are not similar.

“The situation was different then. The situation is different now. We had headed into Doha after a longish camp [in 2019]. The tempo was exceptionally high despite the defeat against Oman in the previous match,” he recalled.

“In the past few days in Doha, we have picked ourselves up besides getting ready for not just Qatar, but the two other matches which are to follow.”

Preparation for the Sunil Chhetri-led Indian football team has been far from ideal. Given the coronavirus-induced lockdown and lack of match practice for the Blue Tigers, with international friendlies against Oman and UAE ending rather disappointingly.

The Indian team landed in Doha on May 19 and began training two days later. A preparatory camp was to be held in Kolkata from May 2, but owing to the Covid-19 pandemic, it was cancelled. The pandemic even robbed India of friendly matches in Dubai as well.

So, the fact that the Indian players haven’t been able to train much outdoors due to the pandemic, could make things tough for India.

Defender Sandesh Jhingan has stressed the importance of preparatory sessions.

“Anyone who understands football knows the importance of a proper preparatory camp, and how important a friendly match is in preparation for a major tournament. Owing to the pandemic, we lost out on friendly matches in Dubai which isn’t ideal,” he had earlier rued.

Sandhu, however, tried to put up a brave front on Wednesday. “In the past few days in Doha we have picked ourselves up besides getting ready for not just Qatar, but the two other matches which are to follow,” he underlined.

There is a minor setback for India as midfielder Rowllin Borges suffered a hamstring injury during training and he remains doubtful for Thursday’s match. There is no other injury concern for the other 23 players, who will be up for selection.

Chhetri said the team would draw inspiration from the drawn match in 2019.

“Qatar are one of the top teams in Asia. They have had some decent results against top European and South American teams in the recent past. The last time we took a point against them makes us confident as a team. We understand that they will come out all guns blazing at us, and we need to stick together as a team,” he said.