ISL 2019-20 HIGHLIGHTS, Mumbai City FC vs ATK: Catch all the live updates from the Indian Super League 2019-20 match between Mumbai City FC and ATK through News18 Sports' live blog. Pronay Halder gave ATK the lead in the 29th minute of the match with a cool finish. He was substituted soon after with hamstring and his replacement Michael Soosairaj too found the back of the net in the 43rd minute. Mumbai City FC and ATK FC go toe-to-toe as three points present both outfits with a fantastic opportunity to dent the other's top-four hopes. The two teams are separated by just a couple of points going into the fixture, with ATK currently in third and Mumbai in fourth with 16 points to their name. Historically, the match has been a close affair with neither side enjoying dominance over the other. Both Mumbai and Kolkata come into the fixture on the back of wins, making the clash all the more exciting.

Currently, on a six-match unbeaten run, the Islanders are in the midst of a purple patch and arguably, are the most in-form team and Jorge Costa's men also haven't lost against the two-time champions in their last four ISL encounters. As for ATK's free-scoring attack, led by the lethal duo of Roy Krishna and David Williams, has scored 19 goals already - the second-best tally in the division. Mumbai's defence, meanwhile, isn't the best and should give the likes of Krishna, Williams and Javier Hernandez enough encouragement. MATCH REPORT

Refereeing will again be the discussion as Mumbai City rue what could have been. ATK though created the chances and took them.

But at the end of the night, goals from Pronay Halder and Michael Soosairaj give ATK the win!

Meanwhile Rafique has replaced Raynier for our last change of the night.#MCFCATK #ApunKaTeam 🔵

Mumbai City puts the ball in the back of the net and again is not a goal. Modou Sougou pokes it in after Arindam Bhattacharja spilled it. The referee gave it as a foul in favour of ATK. What more do the hosts need to do?

ATK make their final change as Sehnaj Singh come on in place of Jayesh Rane.

73' - CHANCE after CHANCE for @MumbaiCityFC @Chermiti9N, @pratikch89 and then @10MohamedLarbi all have opportunities to score but somehow @ATKFC manage to prevent the ball from going inside the net!

68' -  NOT A GOAL!! It is deemed to offside! Modou Sougou had blasted that into the back of the net. The referee blows the whistle though for offside.

Earlier, Roy Krishna misses another chance as his reflect hits the bar. Just not his day?

Mumbai City FC make their first change of the game as Sauvik Chakrabarti goes off and in his place comes on Bidyananda Singh.

ATK are again forced to make a change with David Williams making way for Jobby Justin.

Mumbai City FC have started positively as they start the second half. ATK though are solid at the back with more numbers in their half.

Pratik Chaudhari goes into th referee's book for his late tackle on Roy Krishna. The ATK star was on the break and Pratik had to take one for the team.

Mumbai City have 45 minutes to turn this around. The hosts have a mountain to climb. Pronay Halder and then his substitute Michael Soosairaj score to help ATK with the advantage at the break.

The game has gotten much more physical in the closing phases. The home side's Diego Carlos and then Armando Sosa Pena going into the book. Mumbai need to be careful.

The precision of the highest order! Soosairaj cuts back from the left flank and lets one rip. The ball sails into the top right corner. Amrinder Singh had no chance

Diego Carlos gets the first yellow of the game for a rash tackle on Prabir just outside his own penalty box.#MCFC 0-1 #ATK#MCFCATK#AamarBukeyATK#BanglaBrigade

It does not end happily for Pronay Halder though as he is forced off the field with a hamstring injury just after scoring the goal. He was making a return from injury.

29' - GOAL! Cool finish from Pronay Halder to give ATK the lead!

David Williams gets a through ball from Roy Krishna and in turn squares it back in the middle of the box for Halder to place it into the corner.

​21' - Both Mumbai and ATK have started the game brightly but either team hasn't made a definitive chance to open the scoring.

Roy Krishna gets the clearest chance with Jayesh Rane slipping him through on goal but the Fijian forward just side foots it wide.

14' - WHAT A SAVE from @Amrinder_1 @javih89's dipping free-kick is tipped over by the @MumbaiCityFC custodian!

8' - Time for Mumbai to have a go but it is wide. Mohamed Larbi gets the ball in his control on the left flank with Diego Carlos joining him in the attack. Larbi passes it onto Carlos and in turn, gets the ball back. Larbi tries to direct his first-time shot but it is just wide.

3' - ATK with the early attempt on goal as Jayesh Rane takes a snapshot on goal. but is harmless as Amrinder Singh gathers it low on his right.

It's 3 vs 4 as Mumbai City FC host ATK at the Mumbai Football Arena!

Should be a cracker of a game.

The away side's Victor Mongil makes his debut in the ISL as Pronay Halder makes a return after injury. Hosts Mumbai though make three changes from their last game - Sauvik Chakraborty, Rowllin Borges and Armine Chermiti come in for Sarthak Golui, Sourav Das and Serge Kevyn.

Waiting in the dugouts -

Who will come up on top? 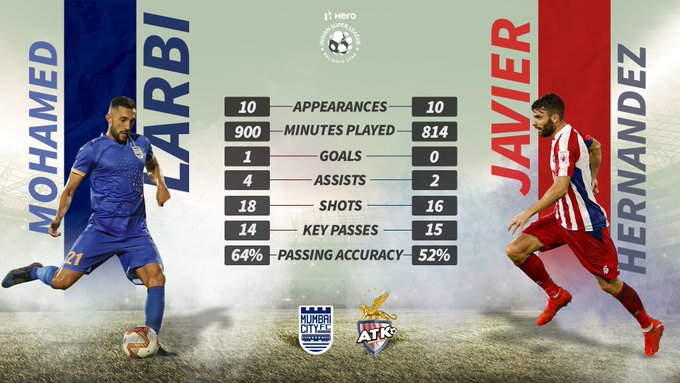 As the top-four race for the Indian Super League heats up, Mumbai City FC host ATK at the Mumbai Football Arena.


ATK head coach Antonio Lopez Habas, who feels his side will have their work cut out against the Islanders. While speaking at the pre-match press conference, he said, "Mumbai is a very dangerous opponent because they have a style of play. We have a big problem in defence because they have good strikers, good wingers and are also solid in defence. It is difficult against all teams in the league because they are dangerous in attack and hard in defence. But I think we will have our chances and we have to use them. I think that Mumbai is one of the more important teams in the league."

Continuing on the same note, Habas added, "I think the result is possibly going to be decided only by a collective effort. It is very important to control the small details and the individual characteristics of the players. I think both teams have players with the possibility to break the balance between the match. We need to have maximum intensity, maximum concentration and maximum attitude in the match."

Mumbai head coach, Jorge Costa reflected on the previous meeting against ATK at the pre-match press conference, and stated, "We played a wonderful game in Kolkata. We could have won the game. We are ready. We know what to do according to their qualities. If they will play three at the back, we know what to do. If they play with four, we know what to do. It will be a different game compared to Kolkata. But we cannot forget we did. We stopped ATK from playing with a good organization. We had more chances to score. I don't know if we will see the same game (in Mumbai)."

The Portuguese coach then claimed his players will be prepared to go up against any formation that the former champions might utilize, stating, "It's not the first time that we play against them. It's true that it is different when the opponent team have a different system. Not all the games they play with three at the back. Sometimes they play with four. So, we must be prepared for both situations and we are."