Manchester United made it into the Champions League next season after finishing third in the Premier League on Sunday with a 2-0 win over Leicester City.

Bruno Fernandes scored a second half penalty that helped Manchester United get the big result. Jesse Lingard came right at the end and capitalised on a mistake from Kasper Schmeichel to score his first league goal since Ole Gunnar Solskjaer's first game in charge in 2018.

Leicester City, who were well on their way to a Top Four finish before the Covid-19 break, paid the price of faltering afterwards and settled for Europa League.

Chelsea finished fourth with an easy 2-0 win over Wolverhampton Wanderers at Stamford Bridge.

Mason Mount and Oliver Giroud both scored just before half time to help Chelsea get over the line.

Kevin de Bruyne scored a brace while Gabriel Jesus, Raheem Sterling and Riyad Mahrez scored one each to give City the big win.

Liverpool came from behind to register a 3-1 win over Newcastle United to finish the season on a high.

Arsenal and Watford played an entertaining match, where the Gunners came out victorious 3-2.

Pierre-Emerick Aubameyang scored a brace in the first half while Kieran Tierney scored their third in the 24th minute.

Troy Deeney and Danny Welbeck scored in the second half but it wasn't enough to give Watford something from the game.

Watford got relegated to the Championship while Aston Villa survived after a draw with West Ham United. Bournemouth also got relegated along with Norwich City. 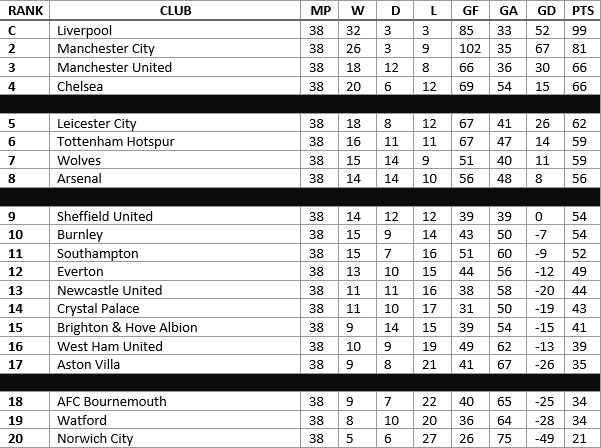