Minerva Punjab FC owner Ranjit Bajaj has accused All India Football Federation of sabotaging their AFC Cup by taking away the Kalinga Stadium in Bhubaneswar.

New Delhi: Minerva Punjab FC owner Ranjit Bajaj has been banging on the doors of the Odisha sports department and All India Football Federation to save the club’s AFC Cup campaign, but sees little hope for his team.

Despite being a successfully-run club, Minerva Punjab FC currently stands at crossroads – with the prospect of it shutting down being a very real possibility. It is one thing to find hurdles on your path and completely another if your parent body – the AIFF in this case - does not support you, Bajaj has alleged.

Minerva Punjab FC are currently in jeopardy as according to Bajaj, the Odisha sports department has informed them that it cannot let the team use the Kalinga Stadium in Bhubaneswar for their AFC Cup ties because it has to carry out renovations as it might be one of the venues for 2020 U-17 Women’s World Cup.

Bajaj says the sports department has informed that it is closing the stadium for renovation after Super Cup 2019 final on April 13.

Minerva Punjab are participating in the AFC Cup as the champions of India. Their matches are on May 1, June 19 and June 26, but their participation now is in limbo due to the availability of the Kalinga Stadium.

That is exactly where Minerva Punjab stand at the moment.

On April 5, Bajaj took to Twitter to announce that he is contemplating shutting down Minerva, blaming AIFF and Football Sports Development Limited (FSDL) for the club’s situation.

“With a very heavy heart today I have decided that @minervapunjabfc will have to do what so many others have done/CHAMPIONS of @ILeagueOfficial for 2018-19 for SENIORS/Under 13/ under 15 /under 18 - SIX TITLES(4 years) 60 plus boys to various Indian teams, is going to shut,” Bajaj wrote on Twitter.

“AIFF & FSDL RELIANCE Congratulations on a job well done - from everyone @minervapunjabfc & all clubs who have shut down because of you,” Bajaj added.

He further said that upon taking up the matter with Odisha sports department, he was told that he should talk to AIFF.

“We will be banned by AFC as it’s too late to change the venue/ if our parent body AIFF doesn’t help us get the stadium which they got cancelled thru govt of odhisa - one of the main reason why we are going out- sabotaged by our parent body Again& again @minervapunjabfc (sic).”

On being contacted by News18.com seeking a clarification on whether he is really considering shutting down the Minerva Punjab academy, Bajaj said, “AIFF has sabotaged the AFC Cup match, what do we do?”

He further added that he had written to AIFF seeking their intervention to save the club’s AFC Cup campaign.

In the letter, which is in possession of News18.com, Bajaj has expressed to AIFF that he is “shattered and extremely disheartened to receive the email on April 4, 2019, from Mr Sumit Pandey, OSD Special Projects, Department of Sports, intimating that Kalinga Stadium will not be available for the AFC matches.”

He pointed out to AIFF that there is enough time for renovation in relation to the 2020 Women’s World Cup and wrote, “It is very unfair for the authorities to schedule renovations at this stage as soon as Super Cup is concluded.”

He has further pointed out that Minerva had adjusted their “AFC cup opening home fixture to an away fixture to accommodate the Super Cup bookings in the interest of all concerned”, even though they “had prior booking of the Kalinga stadium.”

“Minerva Punjab won't be the only ones to suffer, if we are unable to put up a venue for our AFC home matches, it will reflect poorly on India and its ability to host International matches which does not bode well for our 2020 World Cup preparations either. If our stadium booking for Kalinga Stadium for AFC Cup is cancelled at the last minute, it will make news all over Asia, and AIFF which has been working for the betterment of football will make news for the wrong reasons. It would be a death blow for us if our booking is cancelled,” the letter further read.

AIFF general secretary Kushal Das responded to Bajaj’s mail saying that the federation does not have anything to do with the contract between the club and the concerned party for the stadium.

However, he said he will seek clarification from Odisha sports department if Bajaj shows them the letter where they denied making Kalinga Stadium available.

He further said, “In the meantime you are requested to send an official letter to AIFF stating that Kalinga stadium may not be available due to renovations and whether AFC will allow a change of venue. Accordingly we will discuss with AFC.”

An AIFF source also told News18.com that it’s typically not a matter that comes under the jurisdiction of AIFF.

“AIFF has nothing to do with it. The contract happened between Minerva and Odisha government without the involvement of AIFF,” the AIFF source said. 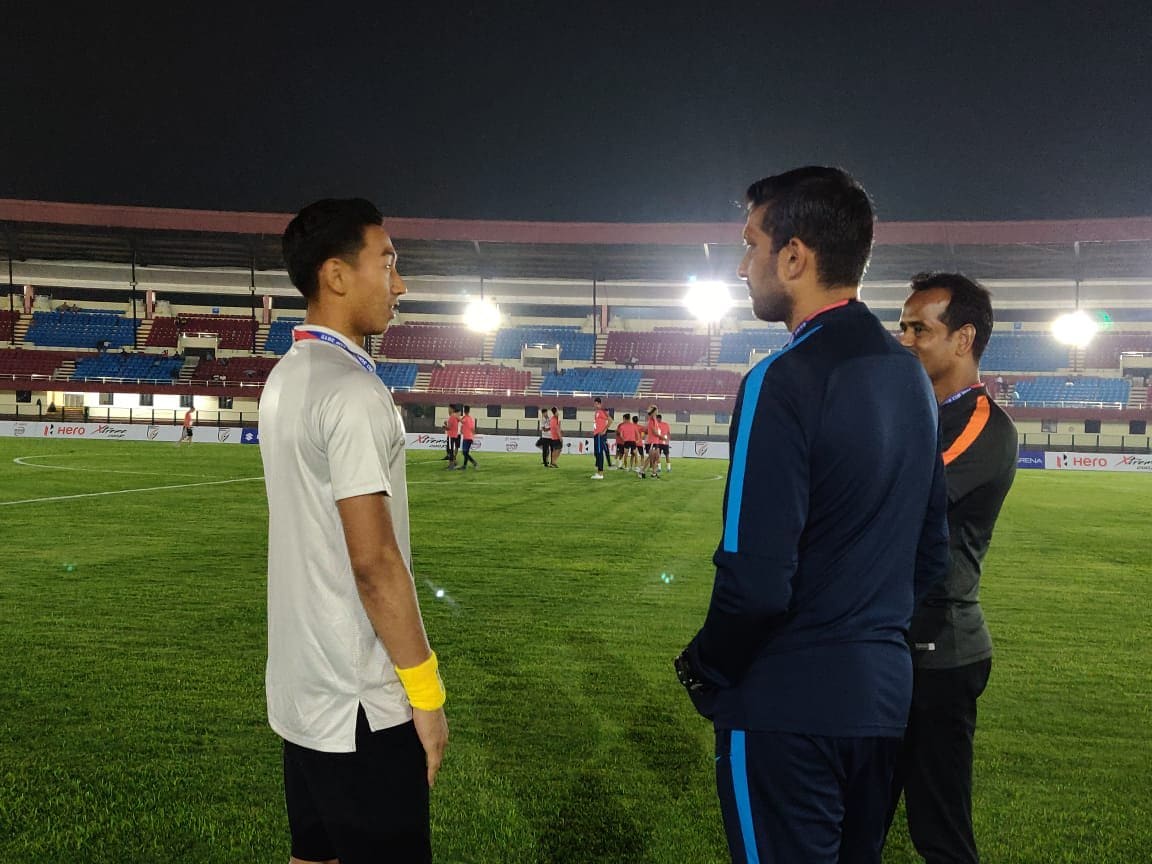 Kalinga Stadium has been hosting the matches of Super Cup 2019. (Photo Credit: AIFF)

Odisha sports department told News18.com that it needs to start the renovation of Kalinga Stadium as soon as possible in order to be available for the U-17 Women’s World Cup next year. They conveyed that because of the scattered nature of the AFC Cup matches, they will lose a lot of time.

“Minerva wanted our stadium (Kalinga Stadium) for their AFC Cup games and we were happy to give it to them very early on in the year. Now the 2020 U-17 Women’s World Cup came up and our stadium took up as one of the hosts. We spoke to AIFF to understand the kind of changes the stadium needs to make it ready to be approved by FIFA.

“What happens is FIFA doesn’t approve of stadiums just ready, they want to see the renovations happening and once a significant chunk of renovations have already happened, they send for analysis and then it goes like ‘okay, this can be one of the venues for the World Cup’.

“So for that, there might be structural changes required to the stadium. On the basis of that, we have to get started on that as soon as possible.

“With Minerva, AFC Cup games are scattered, they’ve got one game in May and two by the end of June. That just takes away two months of time. We were not in a position to let Minerva use it because it would have seriously hampered our chances to make the stadium ready for the 2020 U-17 Women’s World Cup, which is very important to us,” an Odisha sports department official said.

The official also said that they had conveyed the matter simultaneously to Minerva and AIFF and the football federation has told them that they will assist Minerva in getting permission from AFC for venue change, upon receiving the request from the Chandigarh club.

“We have already conveyed this to AIFF and they have told us that they are just awaiting a venue change request from Minerva Punjab and they will be happy to help Minerva get the AFC approval for the venue change.”

“We had sent the same email simultaneously to both Minerva Punjab and AIFF saying that we won’t be able to provide the Kalinga Stadium for AFC Cup games usage.”

On being asked about whether they are aware of AFC rules and that Minerva may get banned for the last-minute change, the official said, “I’m no expert on it but I don’t think that’s the case. That’s the federation’s matter.”

The official also said he had conveyed the matter to Minerva properly and had even asked them to get back in case of any genuine concerns.

“But the next thing we see is that we conspired with I don’t know who to sabotage the games for them. Instead of a formal confirmation from them (Minerva), we heard all that first from Twitter.”

Ranjit Bajaj posted a video on Twitter on Sunday evening pleading to Odisha Chief Minister Naveen Patnaik to intervene and save Minerva’s campaign.

Sri @naveen_odisha Sir, we seek your intervention as @sports_odisha have withdrawn our booking of Kalinga Stadium for our @AFCCup campaign 20 days prior to our match. We represent @indianfootball and if we get banned it will be a National shame, please save us Sir. pic.twitter.com/hiLE3eBjue

In the video, Bajaj appreciated the Odisha government for the development of football and generally sports and requested the CM to help Minerva solve the mess they find themselves in.

“We wrote to the department of sports (Odisha) and now we are writing to the CM,” Bajaj told News18.com.

On being asked whether he will take the matter to world football authorities if Minerva suffer in this mess, Bajaj said, “Yes (we will take the case to AFC and CAS) but first we have some hope from the government of Odisha.”

Now, another I-League club, NEROCA FC, have also come out and announced that they might shut down considering the state of Indian football right now.

“What’s happening with Indian football!! After so much of hard work and investment, we qualified for the top league in 2017 and just after playing 2 seasons of it, we are put to the second division once again. There is no other option but to shut down out beloved club!! We may not be rich with money but definitely we are rich with footballing talents!! But guess Indian football is only about money now!! No room for hard working clubs,” NEROCA wrote on Twitter.

There are only 22 days left for Minerva’s first AFC Cup home match and their chances currently look dim. They had put up an astute performance against Chennaiyin FC in their first AFC Cup game in Ahmedabad on April 3 but ahead of their first home game against Manang Marshyangdi, there are dark clouds hovering above the small but hugely impactful club from Chandigarh.