With the Bundesliga returning to action after coronavirus-forced break, the new normal of football came to life on TV.

Union Berlin could normally expect their Alten Foersterei ground to be packed for the visit of defending Bundesliga champions Bayern Munich, yet the terraces stood empty for Sunday's 2-0 home defeat.

The Bundesliga returned this weekend after a two-month hiatus due to the coronavirus, but the league's strict hygiene guidelines meant matches were played behind locked doors.

Bayern restablished their four-point lead at the top of the table with goals by Robert Lewandowski and Benjamin Pavard.

With their passionate home fans behind them, Union had twice shocked the previous league leaders this season.

A packed house saw the east Berlin minnows stun Borussia Dortmund 3-1 in August and then turned over Borussia Moenchengladbach with a shock 2-0 win three months later.

Yet Union fans had to stay away for the first league visit of star-studded Bayern to the Berlin club and their team could not rely on their noisy support.

"It's a unique experience in itself," said 37-year-old Union fan Oliver outside the stadium.

"It touches something in me to see football on television again, but on the other hand there is something missing in terms of ambience and energy."

In the build-up to kick-off, local police broke up a group of a few dozen supporters who gathered outside the Union stadium, hoping for a glimpse of their players.

"We were just at the stadium and the police told us to move along, unless we have a press ID" said Norbert Kuerzner, a middle-aged Union fan walking through the woods behind the Alten Foersterei stadium with his wife.

The nearby Koepenick train station, normally swarming with red-and-white clad Union fans in the build-up to kick-off, was largely empty.

A single fan stood at the entrance selling match day programmes: one made for the original fixture, which was postponed in March, and one specially produced during lockdown.

Otherwise, the streets around the stadium were quiet.

In the woods behind the ground, mounted police patrolled to make sure no fans were gathering.

Also Read: Cologne Waste 2-goal Lead in Draw with Mainz, Watched on By Fans' Memorabilia in The Stands 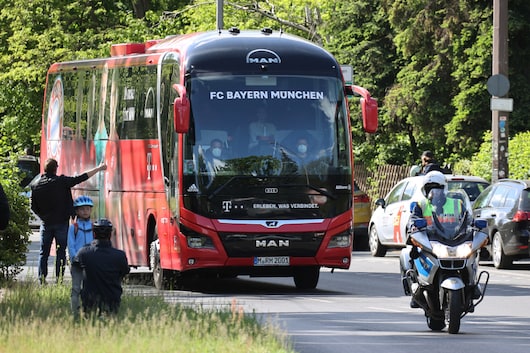 Bayern fan Merita, 42, came to Koepenick with her teenage son in the hope of seeing the Munich team bus.

"We wanted to at least see the (Bayern) bus, if we couldn't see the game live," she said.

"Right now, that's not possible, but I wanted to at least do something to console my son.

"It's good there is football at all, but sad we can't be in the stadium."

The compact Union ground, renovated in 2009 with the help of 2,300 fans who donated their building skills, usually holds 22,000 for a home game.

Noisy fans provide a cauldron-like atmosphere to intimidate visiting teams, yet for Sunday's visit of Bayern only a maximum of 300 people, mainly players, officials and media, were allowed in.

At the Stadium entrance, there were forms to fill out and guidelines to read, with accreditation passes thoroughly checked.

A medical officer was busy taking temperatures and anyone clocking in at over 38 degrees Celsius was to be turned away.

Even the officer himself was supervised by a colleague to ensure the rules were properly applied.

Inside, protective face masks were compulsory.

Unlike at other German grounds this weekend, there were no supporter banners hanging from the empty terraces and no stadium announcements during the game.

"We don't want to simulate normality where there is no normality," said club spokesman Christian Arbeit.